Bollywood marriages either contain charm or controversy. Some don’t last as long as others. We list some such marriages that fell apart.

It is common for Indian people to wed someone from the same industry, with Bollywood marriages being a prime example.

Whist some of these marriages weres successful, others have been less fortunate.

Over the years, there have been many relationships in Bollywood that fizzle out, following marriage.

There are a variety of reasons for this, including different goals, affairs and not being able to progress the bond further.

Interestingly, many of these Bollywood marriages that went pear-shaped involved big stars. 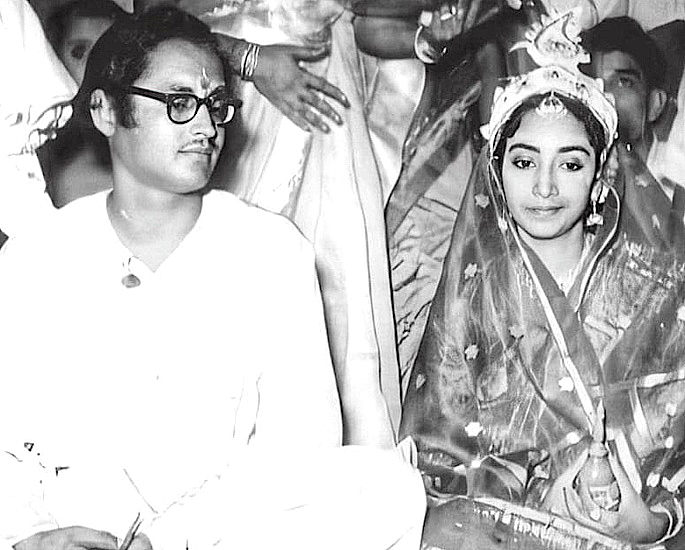 In the 50s, Guru Dutt and Geeta Dutt had become household names in the world of filmdom.

Despite firm opposition from the latter’s family, they wed in 1953.

“In the early years of their marriage, Guru Dutt and Geeta shared much love and affection.

“They enjoyed a great rapport regarding music. Both of them loved their children.”

Rumours of an alleged affair between Guru Sahab and Waheeda Ji created a distance between him and his wife.

The Pyaasa director fell into depression after the failure of his ambitious Kaagaz Ke Phool (1959).

Geeta Ji herself was not doing well in her career.

She was already facing tough competition from Lata.

Then, when Asha Bhosle started making her mark, music composers barely looked in her direction.

She gave her woes to alcohol, which paid her back with liver cirrhosis. Geeta Ji died in 1972.

This certainly became one of the most sorrowful Bollywood marriages of the 50s era. 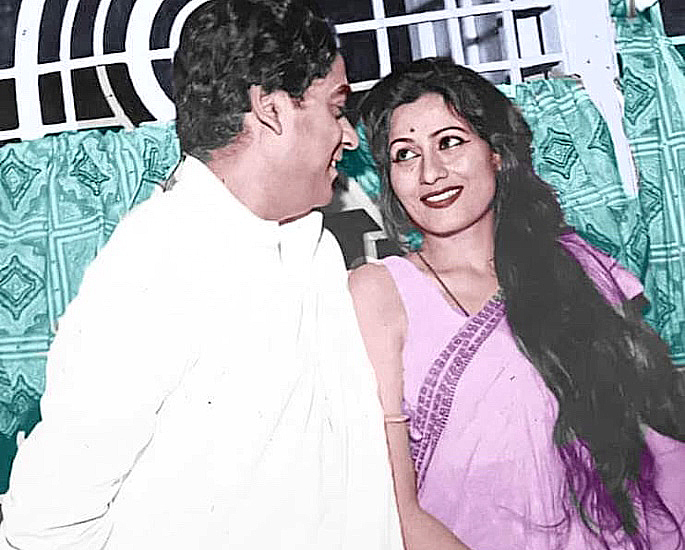 Kishore Kumar and Madhubala married in 1960. This was the second of Kishore Da’s four marriages.

However, this relationship was strained from the moment they tied the knot.

Madhubala was suffering from a ventricular septal defect. This is a congenital heart condition that made her weak, frail and pessimistic.

Furthermore, the Mughal-E-Azam (1960) star was recovering from a controversial break-up with Bollywood legend Dilip Kumar.

“On the rebound [Madhubala] got involved with Kishore Kumar.”

The marriage collapsed when Madhubala was given a life expectancy of two years.

Madhur imparts details about the aftermath of this heart-breaking episode:

“She wanted to be with him. He’d visit her once in two months though.

“He never abused her as was reported. He bore her medical expenses.”

It is also important to note that Madhubala was sad when Dilip Sahab married Saira Banu in 1966. This shows her undying love for the Devdas (1955) actor.

It would have been difficult for Madhubala to love Kishore Da in the same way. She passed away in 1969.

This is one of the most tragic Bollywood marriages in history.

Randhir Kapoor and Babita Shivdasani Kapoor married at a lavish ceremony in 1971.

Most famous Bollywood faces from that time were present at the event.

However, in the late-80s, things well and truly fell apart.

Thus, what could have been one of the most successful Bollywood marriages failed.

Randhir was declared a flop actor. None of his new releases did well.

Furthermore, with younger stars such as Mithun Chakraborty, Sanjay Dutt and Anil Kapoor arriving, he wasn’t obtaining any good work.

The collapse of his career took a toll on Randhir as he began neglecting his professional and personal life.

Babita was dissatisfied with this change in her married life.

She ultimately left Randhir and single-handedly raised their two daughters. They became none other than Karisma Kapoor and Kareena Kapoor Khan.

However, despite living much of their lives separately, the pair never divorced. Randhir spoke of this decision in 2021:

“She’s a crucial part of my life. She has given me two lovely kids.

“We are all grown up people, and we preferred to stay separately.”

Randhir also delves into the breakdown of his marriage:

“She found that I was a terrible man who drank a lot and came home late, which was something she didn’t like.

“So it’s okay. We had two lovely children to look after.

“She brought them up in the best way and they have excelled in their career. What else I could have asked for as a father?”

This shows that there is no animosity between Randhir and Babita. It is admirable that despite not being together, they still share love and respect. 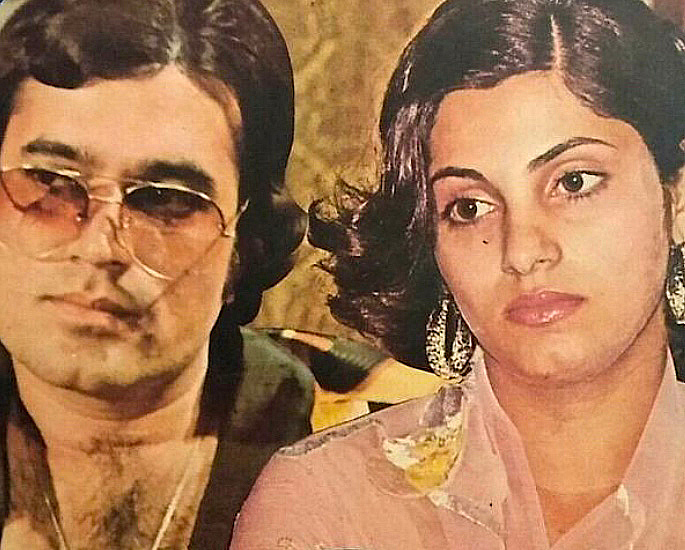 In the early 70s, many female fans were falling for Rajesh Khanna.

He broke millions of hearts when he married the budding actress Dimple Kapadia.

Dimple got married to Rajesh eight months before the release of her debut film Bobby (1973).

Bobby was a massive success. Hence, producers were flocking to sign Dimple for their films.

However, her new husband was adamant that his bride will remain a housewife.

Rajesh’s insistence led to strains appearing in the marriage, which to the outsider, seemed like a dream.

The breaking point came with the production of Souten (1983).

She eventually left Rajesh and resumed her film career.

Although Rajesh and Dimple separated in the early 80s, they never divorced. They maintained an amicable relationship.

In 1990, Rajesh sat down with Amitabh Bachchan for a joint interview.

During the conversation, Rajesh discusses his strained relationship with Dimple, which became one of the most tumultuous Bollywood marriages:

“I had no problems about my wife working. But when I married Dimple, I wanted a mother for my children.

“Besides, if I knew at that moment that Bobby would prove her talent, I wouldn’t have stopped her.

“To curb talent is cruel.”

Dimple cared for Rajesh in his last days and has launched several of his posthumous honours.

During the 70s, Zeenat Aman who was a top star in Bollywood married filmmaker and actor Sanjay Khan in 1978.

Apparently, the Satyam Shivam Sundaram (1978) actress was advised not to marry Sanjay.

But her love was so intense that she disregarded this.

“I love this man. Don’t you understand? I will back his every move and I will make him a king one day.”

Sanjay apparently physically abused Zeenat in a hotel, beating and bruising her.

India Today reports that this was because Zeenat refused to reshoot portions of Abdullah (1980).

They both worked together in this film directed by Sanjay.

Sanjay’s beating led to Zeenat becoming scarred with a weak eye. Onlookers witnessed the attack but did not intervene.

Their marriage was annulled shortly afterwards.

In 1999, Zeenat appeared on Rendezvous with Simi Garewal. She reflects on the incident:

“If you are referring to a chapter in the past, it was very brief.

It is commendable that Zeenat has moved on from the horrific event. This is one of those Bollywood marriages, which should be left in the past. 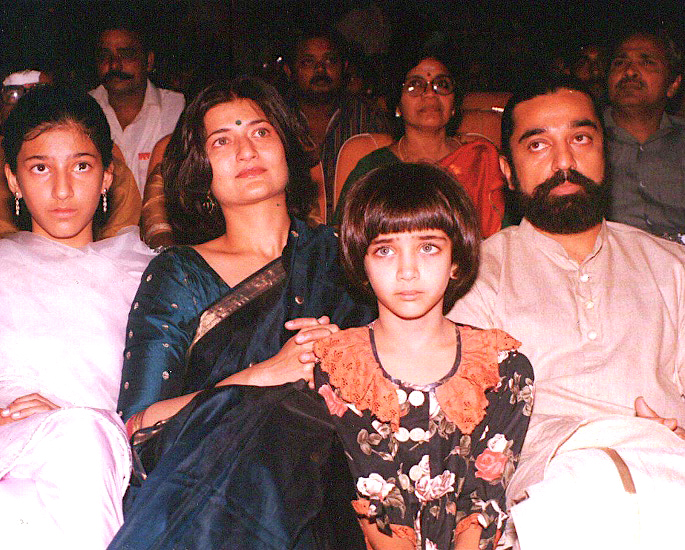 At the prime of his career, Kamal Haasan married actress Sarika in 1988. Sarika is also a famous actress in her own right.

Kamal and Sarika already had a daughter together before their nuptials.

She is none other than Shruti Haasan. This was one of the most loved Bollywood marriages.

However, Kamal started working with actress Simran Bagga in the early 2000s.

Although Simran is 22 years his junior, it is believed that the two stars fell for each other hard.

With Kamal being married to Sarika, this affair did not last long and ended in 2002.

Though, this undoubtedly had broken Kamal and Sarika’s marriage.

On the other hand, one wonders if their differing backgrounds also played a part in the dysfunctional relationship.

Kamal came from a rich background, while Sarika’s family was not so fortunate.

These differences, along with the affair of the Saagar (1985) star led to the couple divorcing in 2002.

In 2003, Kamal admitted that he is scared for the future of his children as a result of the divorce.

However, in 2021, the popular Shruti viewed her parents’ separation optimistically:

“I was glad they separated as I do not think two people who are not getting along, should get along for some reason.”

Failed relationships do not give happiness in any circumstance.

The comments of Shruti show that regardless of glamour and fame, Bollywood marriages are just like any other.

In the early 90s, Amrita was a successful star, while Saif was struggling to join the club of A-list actors.

Saif met Amrita and fell in love. The Naam (1986) actress too was smitten with Saif, even though he was 12 years junior to her.

The two stars became husband and wife in 1991.

The relationship sadly deteriorated in 2004 and ended in divorce. Amrita reportedly began firing potshots at Saif and his family.

“But why am I being constantly reminded of how terrible a husband I was, and how awful a father I am?”

However, Saif also announced his intentions to maintain a healthy scene with Amrita:

“I want no confrontation with Amrita.”

“She was and will remain, an integral part of my life. I want her and my kids to be happy.”

One of their kids is the young actress Sara Ali Khan. In 2018, Saif and Sara appeared together on Karan Johar’s talk show, Koffee with Karan.

During the interview, Sara divulges into Amrita’s attitude when her father married Kareena Kapoor Khan:

“My mom dressed me for my father’s wedding. It was very comfortable. Everyone was so mature. It was not a big deal.”

That perhaps summarises that even after a failed marriage, people can have a cordial alliance.

Indian film stars have always been associated with each other. When those connections lead to marriage, they are created to grab headlines.

As with any other people, many of these marriages sometimes do not work out.

It is worth remembering that marriages become even harder to maintain when they are in the constant glare of the spotlight.

Sometimes, Bollywood marriages clatter under the pressure, which is natural.

Though, it is admirable when the partners involved remain civilised, especially where there are kids involved.

Regardless of their personal lives, Bollywood stars seldom cease their efforts to entertain. For that they deserve respect.