What is Bubble Waffle?

Bubble waffle is the latest irresistible food trend to hit Instagram. DESIblitz explores their origin and tracks its popularity from the UK to India.

Zomato users describe them as ‘an innovative, fresh take on waffles’.

Not only are they all the rage on Instagram, these indulgent fusion waffles have attracted snaking queues in China Town in London and Grand Central in Birmingham.

What is Bubble Waffle?

It dates back to the 1950s, when grocery shop owners would make waffles using broken eggs that could not be sold to customers. Adding milk, flour and sugar to create the mixture, they were prepared in a distinctly-shaped cast iron machine in high heat to create hollow centres. These ‘bubbles’ are what gave the waffles the catchy name. 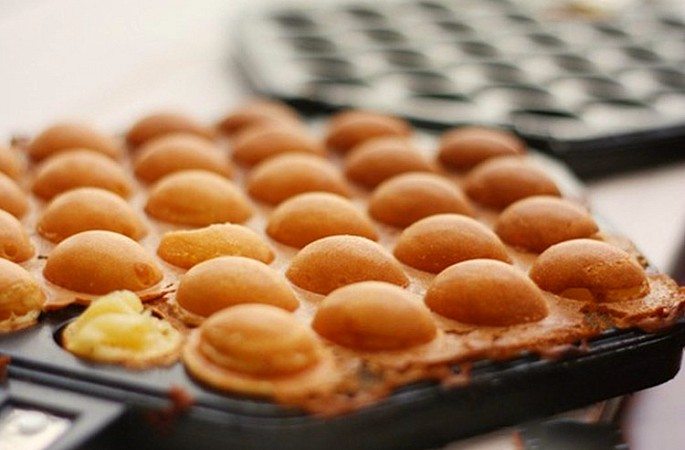 Not only did bubble waffles quickly become a hit for the locals, they even found fame in the Michelin Guide. In recent years, they have undergone a major evolution to welcome countless flavour combinations and adopted a new look. It even headlined its first ever festival in 2017!

The hollow bubbles now contain filling, with decadent flavours like chocolate and matcha. The batter has also been infused with different ingredients to make the waffles highly social media-worthy.

Some take inspiration from the West and smolder them with ice cream, fruits and syrups to kick off a carnival of flavours. This version of bubble waffles have taken food lovers around the world by storm.

Apart from Bubblewrap Waffle and Nosteagia in London, bubble waffles have also found their way to Birmingham, Manchester and Newcastle, aspiring to be the next big thing in the UK’s blossoming food scene. 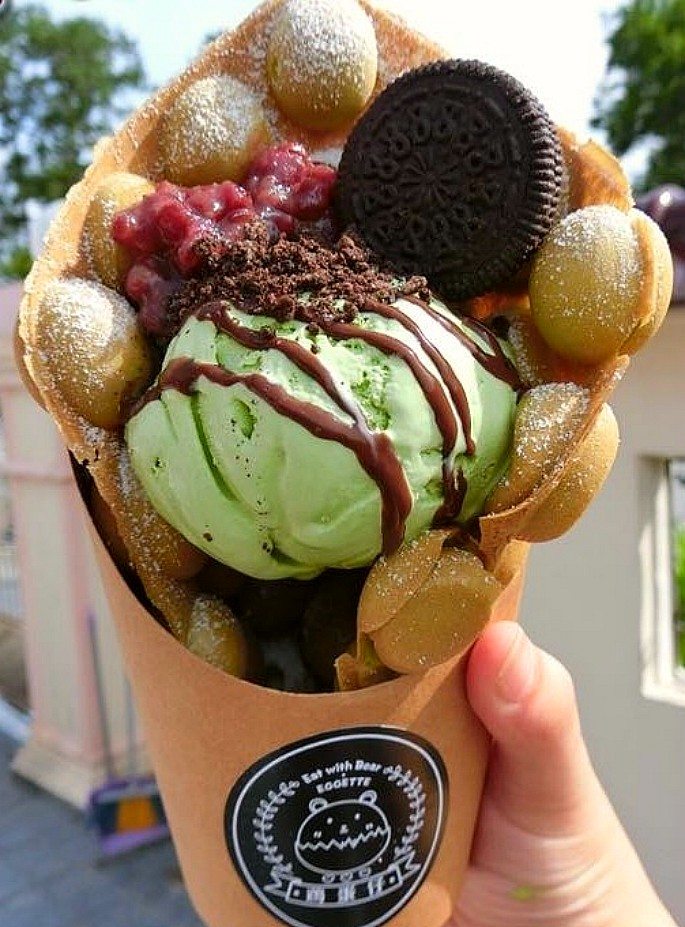 The popularity of bubble waffles has reached India, with outlets popping up in Mumbai and Delhi serving them in all shapes and sizes.

Indian foodies are loving this fluffy and crunchy newcomer, with Zomato users describing them as ‘an innovative fresh take on waffles’ and ‘the perfect answer to your sweet craving’.

We catch up with Teresa Tse, founder and owner of Waffle Queen in Chandigarh, to find out how she gives Hong Kong’s bubble waffles a Desi twist.

Why did you decide to open Waffle Queen in India? 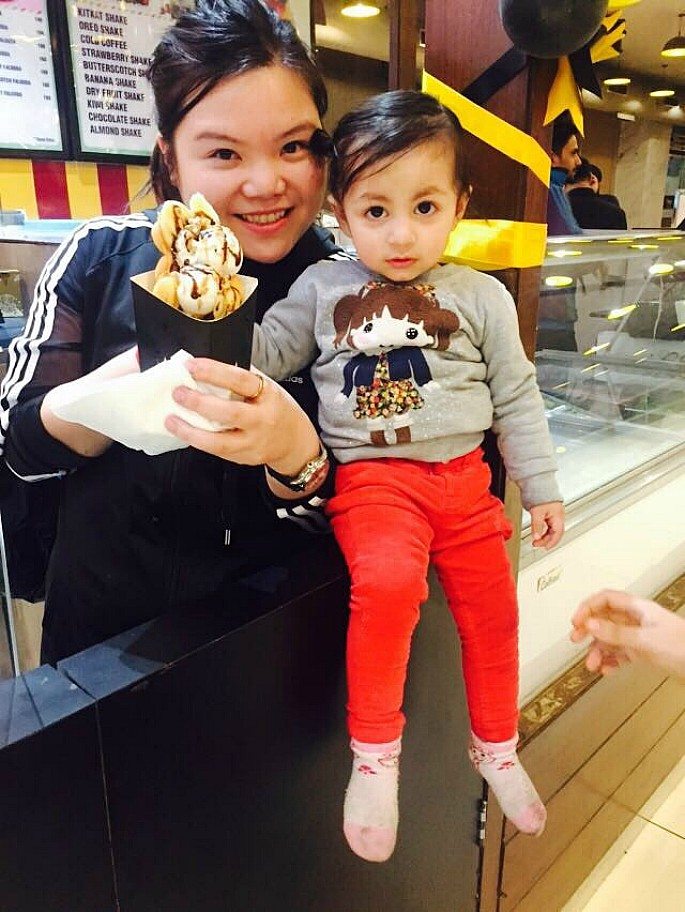 “Since visiting India in 2009, I have fallen in love with its people and culture. So, I have been thinking about what I could do in India if I was to live there.

“One day, I saw on TV an interview with a man who reinvents bubble waffles by giving them many different flavours and colours.

“At that time, I knew there was no bubble waffles in India yet. I had a strong feeling that people in India would appreciate this delicious snack with a Desi twist. I also love the idea of bringing something that is unique from my own home to India, my new home.

“So I started doing a lot of research, taught myself how to make bubble waffles, and experimented with different flavour combinations to make sure they are suited for the local taste with a universal appeal.

“Then in 2016, I opened Waffle Queen in Chandigarh, selling a variety of bubble waffles and tea drinks.” 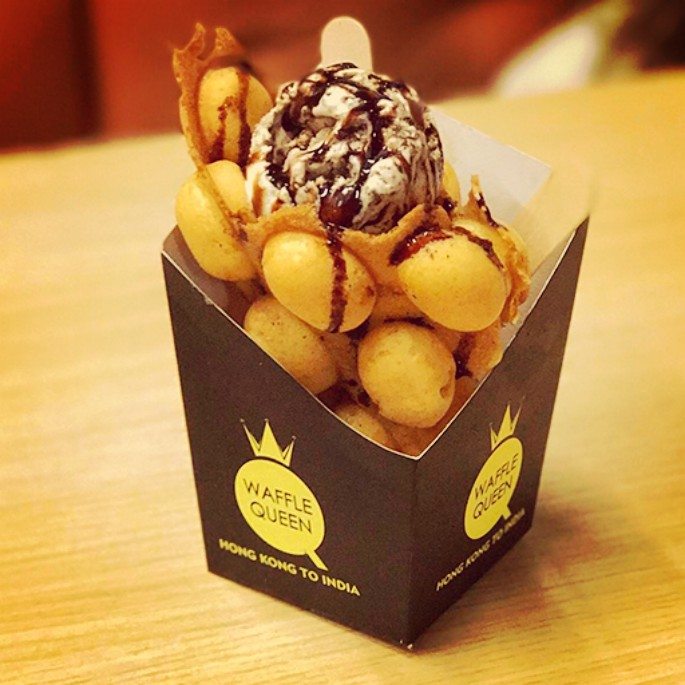 How did you adapt bubble waffles for the Indian market?

“Sourcing local ingredients and understanding how these are used in local cuisine is the key.

“For example, in I Love Chilli, I combine burned red chilli with a rich chocolate sauce and vanilla ice cream to create a delightful balance between the two intense flavours.

“This is easily my favourite bubble waffle because it also reflects my belief that it is important to have a fine balance in life and that we cannot simply indulge our temptations.

“Recently, I have also introduced some Seasonal Specials, such as Little Miss Sunshine (coconut, mango, apricot, Thai palm sugar), to make use of the foods that are easily available in India or in neighbouring countries.”

Which ones are your customers’ favourites, and what are the inspirations behind them? 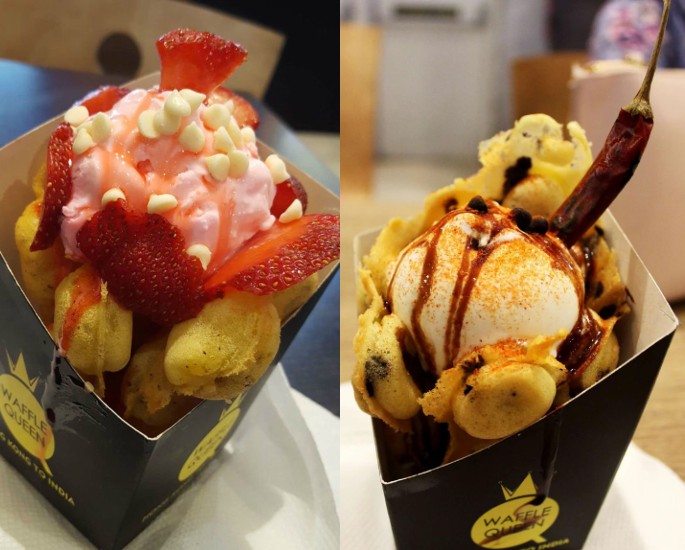 “Choco Fantasy is definitely among their top favourites! Everyone loves chocolate, so I have created the ultimate chocolate fantasy dessert with Belgium chocolate ice cream and chocolate-filled bubbles, topped with whipped cream and a pinch of sea salt to lift its flavour.

“Princess Lips is also very popular among my customers. I originally called it Pink Lips, just like Sunny Leone’s song. I later changed it to Princess Lips because I wanted my menu to reflect the royal theme of Waffle Queen.”

What are your plans for Waffle Queen?

“I want to expand Waffle Queen and open stores across India. I want my customers to chill with their friends over a cup of tea and my bubble waffles. I also want to play all my favourite Bollywood songs in the tea house!”

Bubble waffles have come a long way – from being served piping hot in a paper bag in Hong Kong to being presented in style and extravagance across the world today.

Check out one of these outlets below and spoil yourself with their cracking flavours!