Three including a Woman booked over Gang-Rape of Hostess

Three people, including a woman, have been booked by police over the gang-rape of a 19-year-old hostess in Gujarat.

"as they came into the hall, the victim passed out."

Three suspects, including a woman, have been booked by police over the alleged gang-rape of a 19-year-old hostess in Ahmedabad, Gujarat, on February 14, 2021.

The victim, a native of Mumbai, had gone to work as a hostess for a catering event.

She was then gang-raped by the catering contractor and his friend. Meanwhile, the female suspect witnessed the attack.

The two accused have been identified as Sahil Shaikh and Taskeel Qureshi.

Shaikh’s girlfriend, Tanya Danawala, witnessed the rape and has been charged with abetment to rape.

They have all been mentioned in the case.

According to the police, the victim was accommodated in a one-bedroom flat with six others at a housing complex in the Narol area of Ahmedabad.

“On Sunday, the victim, along with the three accused persons consumed alcohol in the bedroom while the six others were in the hall.

“Then the accused duo after some time took the victim to the bedroom and raped her, the accused woman Danawala had gone inside the room when the incident happened and then left.”

In one case, a 60-year-old woman was allegedly gang-raped by two men in Jharkhand’s Gumla district.

After forcibly entering her house while asking for shelter, the duo dragged the victim out and took turns to rape her on February 14, 2021.

The villagers went to her rescue after hearing the woman screaming.

However, the accused had already fled from the crime scene.

A case against the men was registered on Tuesday, February 16, 2021.

In Rajasthan, in May 2020, police arrested a man after he raped and killed his own 16-year-old daughter.

The girl fell pregnant, and as a result, she was killed by her father with his wife’s help.

According to data released by the National Crime Records Bureau (NCRB), India recorded approximately 88 rape cases every day in 2019. 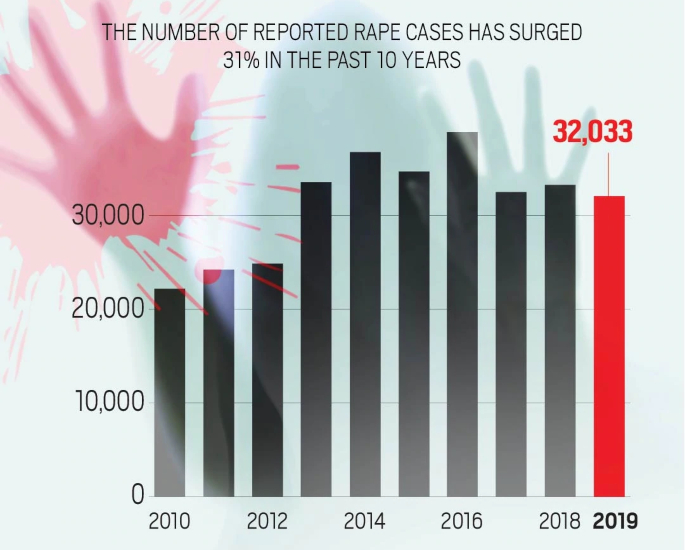 Out of the total 32,033 reported cases in 2019, 11% were from the Dalit community, with most rape cases reported from Rajasthan and Uttar Pradesh.

“They are under tremendous social pressure because of their cast. “They hesitate to report rape cases.

“No one in the police station listens to them in most of the cases, even if they dare to lodge an FIR.

“This police apathy is mostly because of them being from the lower cast.

“It is high time to have a gender sensitisation drive for police at every level.”

In almost 94% of the cases, the offenders were known to the victims.