The Growing Trend of Desi Pizza

We can’t get enough of Desi Pizza. The fusion of the two foods and cultures is becoming increasingly popular. DESIblitz explores some of the hottest Desi Pizza places in the UK.

Oozing cheese topped with your favourite masala spices - can it get any better?

If sitting in Pizza Hut and drowning your meal with Tabasco and chilli flakes sounds like you, a Desi pizza will be your go-to alternative.

The increasing demand for Desi pizzas can be seen in all corners of UK, whether you fancy chicken tikka, paneer or even keema curry!

Both spicy and delectable, Desi pizzas will certainly tickle your tastebuds.

DESIBlitz explores this growing trend, with some of the most popular Desi pizza parlours around the UK. 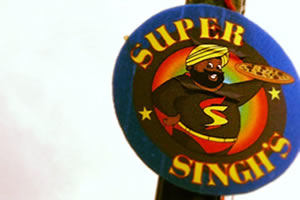 One of the most recent additions to the Desi pizza trend is a small diner-style cafe located in Feltham, called Super Singh’s. It definitely lives up to its name – it’s simply super!

A Desi start-up by two brothers, its menu boasts more than twenty varieties of pizzas. Super Singh’s appeals to vegetarians and is also vegan friendly.

Indy Khehra, the co-owner and elder brother of the two, states that the ‘Chilli Paneer’ and ‘Super Singh Special’ are top favourites.

The former consists of marinated paneer, a variety of vegetables, green chillies and is topped with a spicy sauce. This eradicates the need for customers to top their pizza with extra chilli, which most Desi’s are guilty of.

The ‘Super Singh Special’ consists of veggie chicken, with vegetable toppings and ‘Mrs. Singh’s Special Sauce’. It is a Desi vegetarian’s dream to have veggie meat on a pizza with an Indian twist.

A funny, interesting name of a Desi pizza here is the ‘Garam Kutha’ which has a literal translation of ‘Hot Dog’.  Upon reading it, customers are bound to smile.

Customers will also find joy in the affordable menu prices. In addition, the cafe ambience is catered to the youth where you feel relaxed in a funky setting.

Mr JP Khehra, the co-owner and younger brother, states that in London there’s no place like Super Singh’s. This is absolutely true as we have not found another place quite like it. 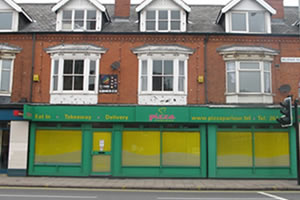 Similarly, in Leicester there is a well-known Desi pizza cafe called Pizza Parlour. It has been running since 1990 with great success and is one of the first to have Desi style pizzas on its menu.

This cafe attracts both vegetarian and non-vegetarian customers as there are options for both toppings available.

The ‘Keema Supreme’ and ‘Yogi Special’ are both rather interesting. Imagine a pizza topped with masala-spiced Keema Curry. Keema being a Desi favourite makes a delectable pizza topping.

The ‘Yogi Special’ is the ultimate meat-feast of ham, smoked sausage, chicken, pepperoni topped with green chillies and sweet corn.

Similar to the other restaurants,  there are paneer options available for the extra cheesy Desi’s. Sabji toppings are also an option here. 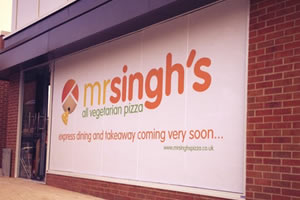 In the Midlands, the popular choice amongst British Asians is Mr Singh’s Pizza. A vegetarian’s paradise with a variety of pizzas to select from.

A family-run restaurant, Mr Singh’s was established in 2005 and has been rapidly growing ever since.

There are currently two branches, one in West Bromwich and one in Handsworth Wood. Their success and popularity is evident by their expansion.

The well known delectable specials that can be found here are the ‘Vegetarian Pepperoni Pizza’ and ‘Spicy Paneer Pizza’ respectively.

Irrefutably, Desi’s can’t get enough of cheese and Mr Singh’s has you covered, offering extra paneer as a topping. This killer combination is a favourite. The masala marinated paneer is a Desi flavour that everyone craves.

‘Vegetarian Pepperoni’ as an option lights up the eyes of hungry vegetarians just by reading it on the menu.

Mr Singh’s holds a special place in the heart of most foodies. Any British Asian travelling via Birmingham will be tempted to make a quick stop here before hitting the road!

DESIBlitz Tip: In contemporary times, instead of a traditional Saag Paneer – a Masala Spinach Paneer Pizza appears as a great, attractive alternative!

Desi pizzas are evidently becoming more popular across the UK.  It’s no surprise that British Asians and even non-Asians are loving the pizza-masala fusion.Which Desi pizza will you be trying next?

Bandhna is an Entrepreneur and Co-Founder of Envylope App. She loves food, Bollywood, globe-trotting and anything that SPARKLES. Her motto: Aim for the moon, even if you fall - you’ll reach the stars.
Effortless Cooking with the Palate Smart Grill
Healthy Shopping on a Budget at Supermarkets