"Shanti is independent, ruthless, a bit of an anti-hero and her culture is important"

Shanti is actually one of the first regular South Asian characters to appear in a comic book.

Besides Kamala Khan’s Ms Marvel series, seeing a South Asian character on the cover of a Comic Book is an extreme rarity.

In an exclusive interview, Steve Tanner tells DESIblitz about his company, Flintlock and Shanti as well as his thoughts on South Asian under representation in the industry and diversity in the indie and mainstream worlds of comic books.

Tell us about Time Bomb Comics and the journey from inception to present day? 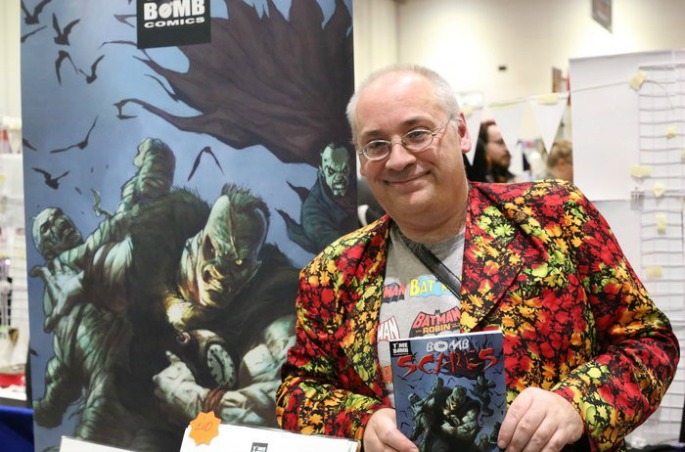 Time bomb was formed in 2007 and we are currently in our 9th year of publishing. I’d been interested in comics with a passion since childhood and that passion grew and grew through the years.

I’d written comics for other publishers over the years but then moved away from writing for a while because of my day job. Between 1998 and 2002 I was based in the British High commission in New Delhi.

During that time I lost touch with comics but then came back to the UK in 2002. I moved to Leicester and went to a comic convention in Birmingham in 2006; my first convention in about 10 years.

There I found lots of indie comic creators and came away with a stack of indie titles as well as a resolve to be at that convention a year later and sell my own comic on the other end of the table.

Time Bomb has always been about the story, telling a good story and over the nine year period it evolved to something that now endorses other people’s work.

Some of these people were those I met at the convention in 2006 which brought things full circle in a way.

I tend to sell the books face to face by shows because there are so many now. From the start of Time Bomb every comic is a complete story (one-shot) and we normally do 2 or 3 titles a year max. 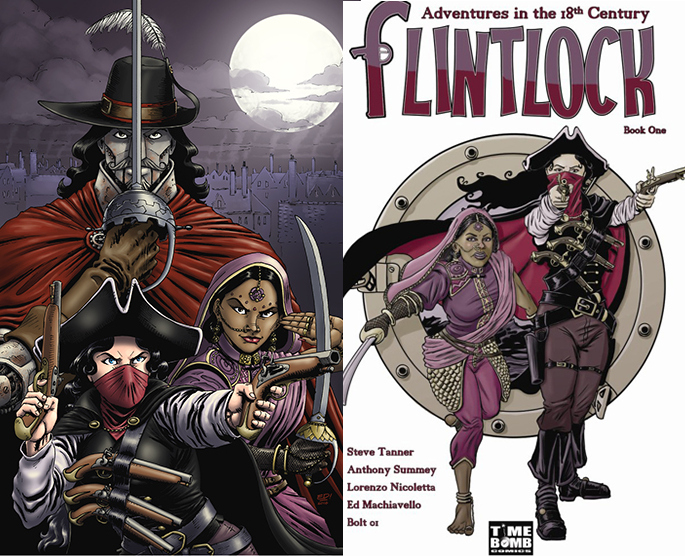 Without spoiling too much what is the narrative of Flintlock?

I developed an interest in 18th century history and I wanted to produce something quite unique.

All of the stories of Flintlock take place in a 100 year period and all of the characters, even though they may not meet, share a timeline or universe and their actions can affect each other.

I wanted to create adventure stories like I used to read in British weekly comics which were aimed at children but with a historical focus as the backdrop.

Also, I wanted to have characters you wouldn’t normally see. I’m a white hetero male and they are the majority and over the years that I’ve been working in comics this has been niggling at me.

“There weren’t many major strong female characters in comics; most are over sexualised without much depth. Female superheroes are pretty much male super heroes but drawn as females; there aren’t many narrative differences.”

In the western culture there aren’t many South Asian characters. Before Kamala Khan as Captain Marvel it was a blonde white woman; there was no representation of that kind of character.

Flintlock seemed like a good vehicle to introduce these kinds of characters with a historical element. 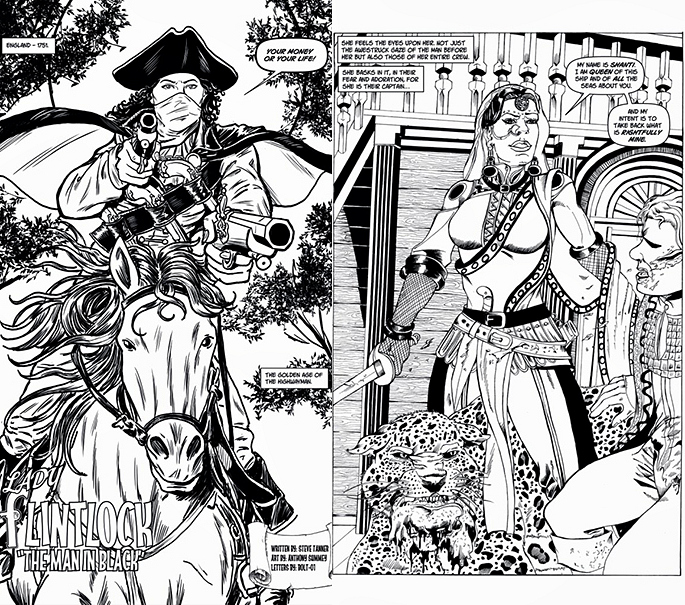 What is Shanti’s role in the story?

Shanti is a pirate queen. The 18th century was one of the golden ages of piracy. We are very familiar with Captain Jack Sparrow and Blackbeard so I wanted to do something different.

Judging from the cover of the comic it seems she is a very strong, capable, sword-wielding character. Is this the case?

Yes she is, she’s independent, ruthless, a bit of an anti-hero and her culture is important. The essential thing is that the female characters are not hypersexualised and they are strong in their own right.

Many of the South Asian comic fans really latched on to the idea and that’s terrific and at the same time to tell an entertaining story. It’s great to bring a strong female character to British comics.

Do you feel South Asian characters in particular are underrepresented in comics?

Yes I think I do, what was surprising to me when I lived in Delhi there wasn’t really a strong comics culture but now this has grown over the years.

Indian comic book publishers sent me an image if an Indian pirate character who looked like a Hollywood actress which was very surprising; she looked like a Kim Kardashian figure.

I would expect an Indian lead character to look Indian and not western but living there with the Bollywood culture, many Bollywood actresses are very pale. 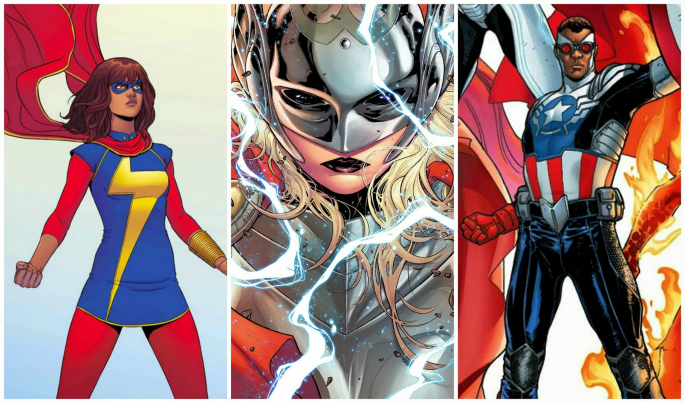 When creating your art is diversity at the forefront of your mind or does it come as more of an afterthought?

I don’t think we should set out to do something diverse; it should come from the story. At the same time you should be open minded to how that story unfold.

I knew I’d need a pirate in the Flintlock story; it wasn’t a case of ‘I need an Asian character’, it was the case of building a world first and thinking what would fit in this world.

Make sure the character fits the story but be open minded with the type of characters you can use.

For example, it’s very rare to see a disabled character in any of the roles whereas I’ve met disabled people in a variety of roles in life. It seems that diversity isn’t reflected in entertainment that we read and watch.

Do you think Comic Books are diverse enough in their current state?

Comics are constantly evolving. They are much different now than 10 years ago let alone 20 and 30. The comic creators are now diverse; they are female and from multicultural backgrounds.

They will bring their own sensibilities and experiences that will lead to diversity in that evolutionary process. The more the diversity of the creators behind the comics the more diversity there will be in the comics themselves.

Do you find the indie scene is more diverse than the mainstream?

Definitely, without a shadow of a doubt. The mainstream is dominated by the desire for licensing and profit share. Look at the films, so many are coming out.

The last avengers made more money than marvel comics in the last 10 or 15 years combined. Because of that there is very little opportunity to do anything different or desire because of the bottom line.

Indies, because they are not bound by that, tend to be more experimental, more personal and more interesting.

How do you think diversity can be improved in the mainstream? 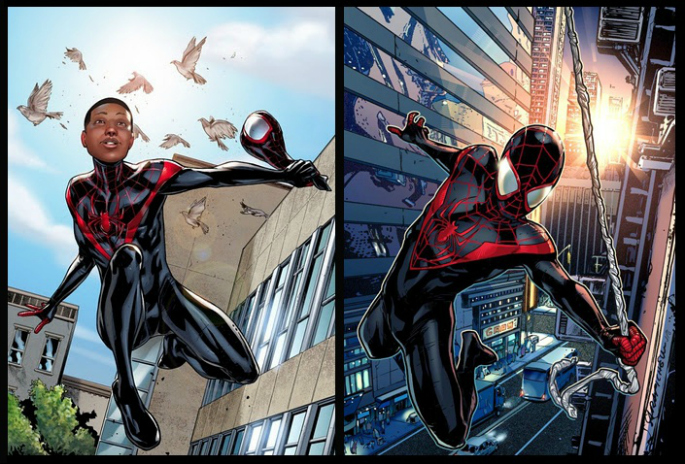 It’s a bit generational. My daughter is 6 years old and she’s growing up in a society where it doesn’t matter what race her friends are.

As her generation grows that mentality will continue to widen. 30/40 years ago there was a huge problem/divide in Britain.

Although racism is still around people are more educated now and it is ridiculous that anyone would make judgements on someone based on the colour of their skin.

It’s the same thing with homosexuality; nowadays the majority of rational minded people don’t have a problem with.

Now it’s the trans community who are facing the same backlash as the gay community did.

Society evolves, grows up and matures. It’s only dinosaurs that remain with these nonsensical attitudes and they will die out.

Steve Tanner is paving the way for more diversity and inclusivity in comic books. With the addition of Shanti the Pirate Queen on independent comic book stands, perhaps we can see more Asian characters emerge.

If you’d like to find out more about Shanti the Pirate Queen you can visit the Time Bomb Comics website.