Shahin Badar has reached the heights of tremendous music success collaborating with bands like the ‘The Prodigy.’ In an exclusive DESIblitz interview, she tells us more about her music and life.

"Go out there and research, and then value me and my work."

Shahin Badar is an award winning British Asian Singer/Songwriter. She is a unique artist who is well known for her musical collaborations on the international music scene, especially in the Electronica, Breakbeat, Dance, Trance and Asian fusion genres.

Born in Colchester in England to Muslim parents from India, Shahin spent 12 years living and being brought up in Kuwait. Shahin demonstrated talented vocal ability at a young age. Her mother who is a classical singer and her teachers, encouraged her to take classical music lessons. During this time she developed a blend of Indian and Arabic vocal styles used as a foundation for her music today. 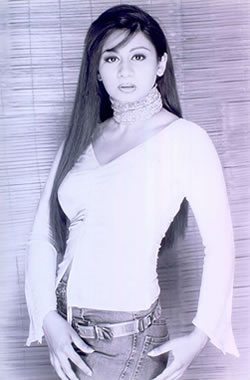 Shahin’s first album ‘Destiny’ was a British Asian release produced by UK  music producer Kuljit Bhamra.  Shahin’s love grew towards music with non-formula songs and productions. This attracted her to sing and collaborate with very different types of bands, producers and artists around the world.

The most recognised hit for Shahin is the controversial but huge hit Smack My Bitch Up with the number one UK band Prodigy, released in 1997.

Watching Prodigy performing on a pop show on television prompted her desire to work with them. Although her mother did not ‘understand’ the music, Shahin got to work with Liam Howlett of the Prodigy and performed her vocals on their smash hit number one single.

The single, part of their blockbuster album, Fat of  The Land, reached the number the one spot in the UK, USA and twenty-one countries in total. In 1997, it achieved Double Platinum, clocking over 600,000 sales. It also entered into the Guinness Book of Records as the fastest selling album at the time.

Shahin believes in trying things that are of a different perspective musically and likes the challenges of writing and recording songs that push her creativity. She says, ‘I love something that is off the mark… I go looking for something different.”

Hence, the outlook to work with all sorts of different producers especially of the Electronica, Breakbeat, Dance and World music genres. She also enjoys performing on Asian music recordings including Bhangra and Bollywood as long as they appeal to her style. 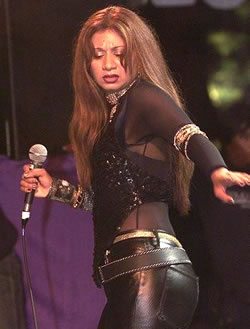 Shahin’s collabration with Tim Deluxe on the House stomper ‘Mundaya’ was chosen as ‘Essential tune of the week’ by BBC Radio 1 DJ Pete Tong.

Her vocals have already featured in more than 30 Hollywood and Bollywood films including Academy BAFTA and Golden Globe Award nominated Closer,  Academy Award nominated Charlie’s Angels and Shyam Bengal’s Zubeidaa. US sitcoms North Shore and Kevin Hill are also on the list.

Highlights of her career to date include being part of the Prodigy success, supporting US rapper 50 Cent on his tour in Lebanon with award winning producer Guy Manoukian at the Biel in front of over a twenty thousand strong audience; working with Oscar winning AR Rahamn, an invite to perform with chart topping Turkish artist Mercan Dede in Germany and a live appearance with Joi on the famous ‘Later with Jools Holland’ music show on the BBC (see video below).

On a personal note, after battling with a serious illness, Shahin has recovered and is back on the music scene working hard on lots of collaboration projects. Also, she is looking to settle down at some stage. Ideally with someone who understands and respects her music and career.

Here are some of the awards won and nominations earned by Shahin Badar:

DESIblitz caught up with Shahin Badar during her busy schedule and asked her about her life, music and future plans in an exclusive two part video interview.

Her album ‘ Laila’  features 18 tracks with edgy, tripping and hypnotic beats and chants. Tracks like Doleh Reh, Laila and Andheri Raat are just some of the hot tracks on the album. She says to the people who do not know her or her music,”Go out there and research, and then value me and my work.”

Shahin Badar is a determined female artist who has proven herself as a mainstream crossover singer as well as keeping a staunch name in the British Asian music scene. She is most likely the only British Asian female singer who has accomplished such recognition, and we know that there is a lot more to come from this versatile, elegant and energetic artist from London, UK.

Below, you can see a special photo gallery of Shahin Badar.

Gallery photos credits include photos by Eron, Shahin Badar with The Prodigy; Indian Ropeman; Tim Deluxe and Dopebuzz. All other photos by Vintage Creations for DESIblitz.com.

Filming by Vintage Creations for DESIblitz.com.