Same-Sex Couple slams TikTok for taking Down their Video

A same-sex couple from the United States received a lot of support after they slammed video-sharing app TikTok for taking down their video.

"so the rumours about homophobia are true."

A same-sex couple from New York City criticised TikTok for taking down their video.

Anjali Chakra and Sundas Malik first hit headlines when their photoshoot went viral. Anjali, from India, and Sundas, from Pakistan, were seen laughing and kissing under a rain covered umbrella in traditional outfits.

The couple then shared an innocent video of the two dancing on the video-sharing app.

However, the short clip was removed as per TikTok’s community guidelines. The couple did not stay silent as they slammed the company for pulling their video.

Anjali uploaded the same video on Twitter on December 1, 2019, after finding out that TikTok had removed the original video.

In the video clip, Anjali and Sundas are seen wearing loungewear and slowly dancing before jumping and clicking their fingers.

At that point, their casual clothes turn into glamourous outfits and their dancing becomes more energetic.

On December 6, Anjali posted: “TikTok deleted this for ‘violating community guidelines’ so the rumours about homophobia are true.”

She added: “TikTok you wanna explain why this got taken down.”

TikTok deleted this for “violating community guidelines” so the rumors about homophobia are true https://t.co/cjI5zHNAHx

The Twitter post received over 4,500 likes and many users supported the same-sex couple for openly criticising the social media company.

“I read the TikTok community guidelines and in no way the video violates it!! It is just so disappointing!!”

Later Anjali informed her followers that the video was re-instated.

She shared a series of messages between her and a technology reporter. Anjali revealed that TikTok put the video back up without her knowing.

Technology reporter Ivan Mehta, of Indian Idle, told her that he questioned TikTok on their reason for removing the video while bringing up a point about their alleged bias against LGBTQ and disabled people. 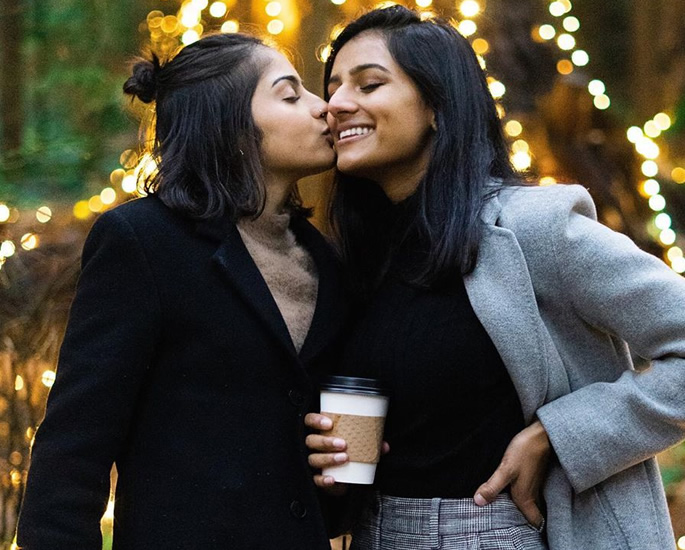 TikTok’s initial removal of Anjali’s video came just days after they admitted to a set of policies that had suppressed the reach of content created by users assumed to be “vulnerable to cyberbullying.”

The policy listed people with facial disfigurement, autism and disabled people as users who are “susceptible to bullying or harassment”. Other communities include LGBTQ.

The admission came after German site Netzpolitik reported that TikTok asked moderators to watch short videos and decide if the creator looked like the type of person that others might want to bully.

If so, moderators were told to flag the accounts of “vulnerable” users.

This would stop their videos from being shown to audiences outside their home countries. In some cases, the flags would prevent people’s videos from appearing in other users’ feeds.

Flagged users included people with and without disabilities, plus-sized people and people who identified as LGBTQ.

Those at TikTok who created the policy may have felt that it was a way to reduce online bullying.

However, the policy has not been welcomed, with users calling it “discriminatory.”

Dhiren is a journalism graduate with a passion for gaming, watching films and sports. He also enjoys cooking from time to time. His motto is to “Live life one day at a time.”
Watch Dogs: Legion – Hacking Your Way across London
Luxury Yachts owned by Indian Business Tycoons