The Queen’s Platinum Jubilee marks 70 years on the throne and it has begun with the Trooping the Colour ceremony.

“I continue to be inspired by the goodwill shown to me"

Britain has embarked on a four-day weekend to mark the Queen’s Platinum Jubilee.

The once in a lifetime event will see members of the monarchy, celebrities from the UK and across the globe, and people from all parts of the UK gather to recognise the Queen’s legacy as she marks 70 years on the throne.

The Platinum Jubilee celebrations mark a momentous occasion when on this day Her Majesty, The Queen was crowned in Westminster Abbey in 1953.

Street parties and social gatherings across the UK are all celebrating and commemorating the reign of the Queen over the last 70 years.

Crowds gathered along The Mall in London as the celebrations began with the traditional Trooping the Colour ceremony.

The opulent military parade involved more than 1,000 troops and hundreds of horses.

But for the first time, the Queen did not inspect the troops and receive the “royal salute” on the ground herself. 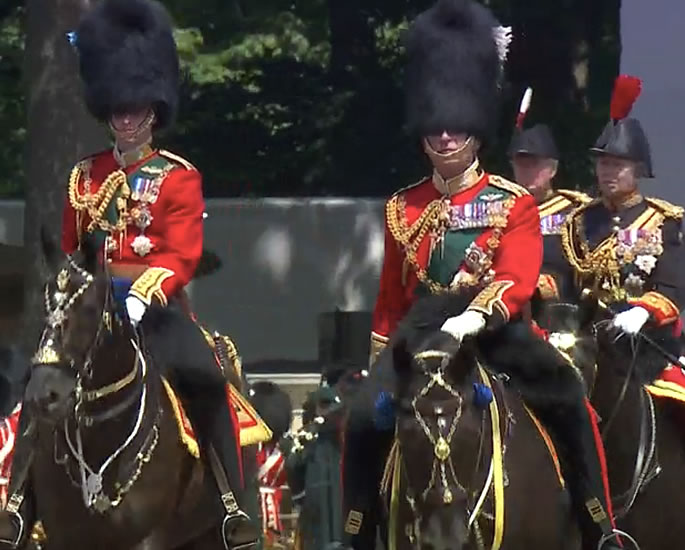 Now aged 96, the monarch has suffered from ill-health including what the palace calls “episodic mobility problems” in recent months, cancelling a slew of events at short notice.

Instead, Prince Charles received the salute.

Charles rode on horseback and wore his red Colonel of the Welsh Guards uniform. He was joined by Prince William and Princess Anne, also in uniform and mounted. 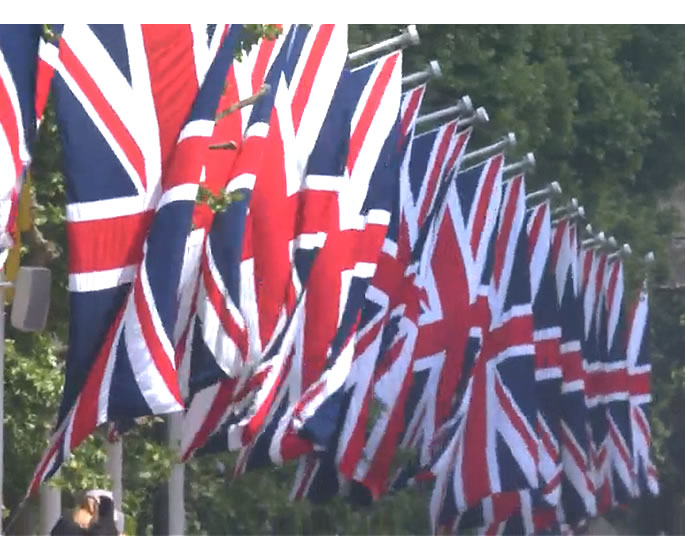 But crowds erupted into cheers when the Queen emerged on the royal balcony at Buckingham Palace for the first time.

She appeared alongside her cousin the Duke of Kent, Colonel of the Scots Guards.

She wore an Angela Kelly outfit, comprising of a dusky dove blue Charmelaine wool dress embellished with pearl and diamante trim around the neckline and cascading down the front of the coat.

It was completed with a hat in matching dusky dove blue Charmelaine wool with a turned-up brim embellished with a pearl and diamante trim.

The Queen also wore the Guards’ Badge on her coat. 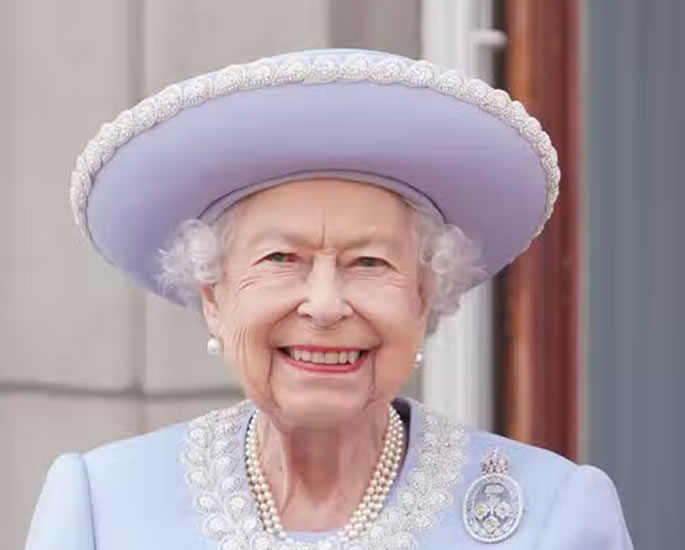 The Trooping of Colour parade did not disappoint as the monarch was seen smiling throughout the procession.

A six-minute flypast featuring more than 70 aircraft, including The Red Arrows, later soared over Buckingham Palace.

The display included helicopters from the Royal Navy and the Army and RAF aircraft recently seen responding to events in Kabul and Ukraine and the coronavirus pandemic. 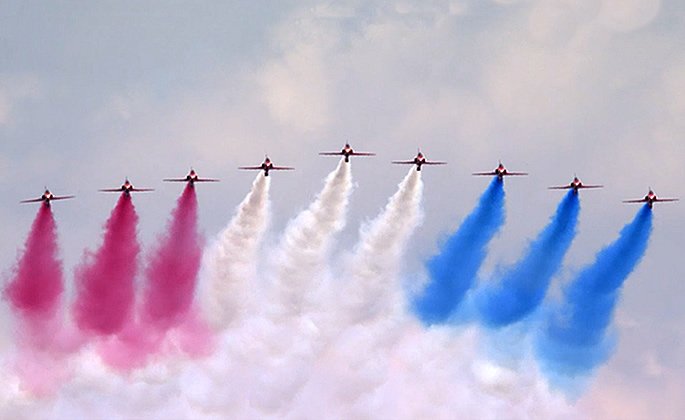 The flypast also included highlights from the history of the RAF, with Puma and Chinook helicopters flying over the palace followed by the Lancaster, three Spitfires and two Hurricanes, all operated by the RAF’s Battle of Britain Memorial Flight.

To celebrate the occasion, the King’s Troop Horse Artillery fired the 82-gun salute from Hyde Park.

The salute followed the Trooping the Colour. 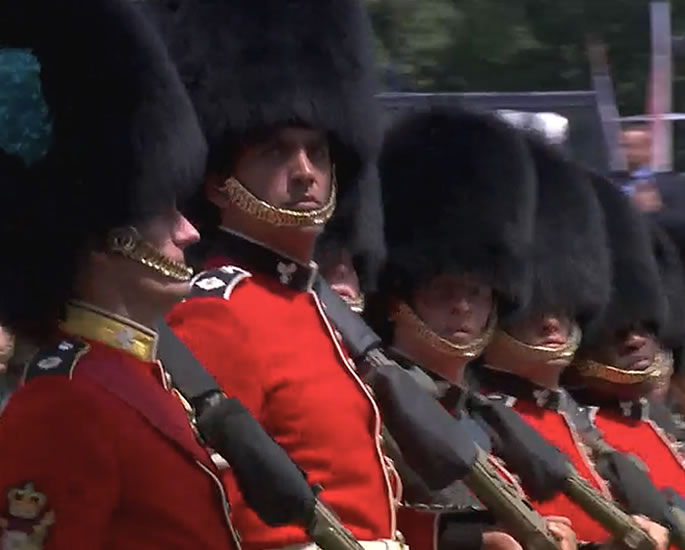 A salute was also fired from Edinburgh, Gibraltar, Stonehenge, Portsmouth, Stirling and onboard the HMS Prince of Wales, as well as many other locations.

Prior to the Platinum Jubilee, the Queen said: “Thank you to everyone who has been involved in convening communities, families, neighbours and friends to mark my Platinum Jubilee, in the United Kingdom and across the Commonwealth.

“I know that many happy memories will be created at these festive occasions. 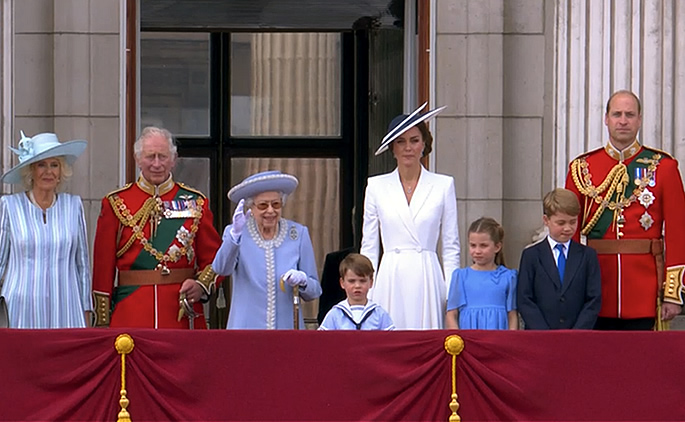 “I continue to be inspired by the goodwill shown to me, and hope that the coming days will provide an opportunity to reflect on all that has been achieved during the last seventy years, as we look to the future with confidence and enthusiasm.”

Working members of the Royal family including Prince Charles, Camilla, Prince William and Kate Middleton later joined the Queen on the balcony as well as Prince George, Princess Charlotte and Prince Louis. 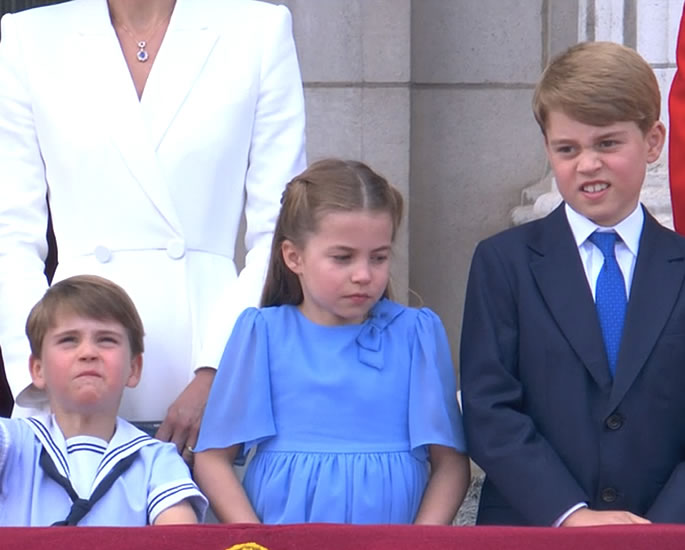 The Platinum Jubilee celebrations demonstrate the love and admiration for Her Royal Majesty, The Queen, and everything this remarkable woman has represented throughout history.

Dhiren is a journalism graduate with a passion for gaming, watching films and sports. He also enjoys cooking from time to time. His motto is to “Live life one day at a time.”
Asians on Queen’s Birthday Honours List 2022
US Indian Woman killed whilst Parasailing with Children