June 2012 marked 60 years reign of Queen Elizabeth II of the UK. Events up and down the country took place to celebrate this wonderful occasion. In particular, many events were held to celebrate the Queen’s Diamond Jubilee ‘Asian Style.’

"the festivities reveal a sense one 'oneness' of all cultures"

The Queen’s Diamond Jubilee celebrated her sixty years in reign during the first weekend of June 2012. All over Britain, people were celebrating turning out in hundreds wearing red, white and blue. An estimated million people turned up at Buckingham Palace alone to see the Queen, greeting her at her balcony with waving British flags in her honour.

Crowds of Royal colours flooded the streets of Britain this weekend, in particular London. The Asian communities in the UK also played their role in celebrating this auspicious occasion with many Jubilee activities taking place up and down the country in honour of the Queen.

Over 5000 people turned out at the biggest street Party Lancashire ever saw. For the residents of Victoria Street, Blackburn, the weather was glorious on 4th June for this street party, and the crowds enjoyed the sunshine, exotic foods and the fun activities for children. The money raised on the day went to the East Lancashire Hospice. 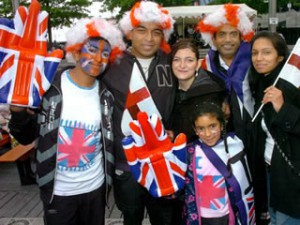 Hundreds attended the Khidmat Centre in Bradford for colourful celebrations organised by the Council for Mosques. It included an outside performance of traditional Asian music featuring folk singer and dancer Bashir Lohar, playing a chimta and wearing a colourful costume, and accompanied by hand drummers Mohammed Younis.

Aisha Khan, who brought her three teenage children to the event, said: “We wanted to be part of the Queen’s Jubilee, we are really proud and it is an historic day.”

Council for Mosques president, Mohammed Rafiq Sehgal, said: “Everyone here feels part of Britain. They live here, this is their country and they believe in what the Queen does. She represents the country really well and we all want to celebrate her.”

Everywhere there were people celebrating, of all ages, various cultures and faiths, braving the cold miserable weather to pay tribute to the Queen in a series of events throughout the weekend. 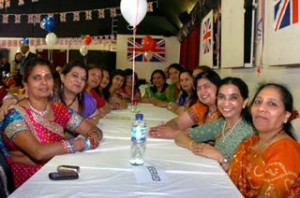 Thurrock Asian Association joined in with the event spirits and celebrated the Queen’s Diamond Jubilee with great enthusiasm, holding a ceremony on Sunday 3rd June at the Beehive Resource Centre, and again on Monday 4th June at the T.A.A Resource Centre. At the Beehive Centre, the residents were entertained by many different performers. A famous Asian Group from Ilford sang and danced, performing songs by the Thurrock Asian Adult Music Group, dancing by the Thurrock Asian Bollywood Dancing Class.

It followed onto a cake being cut by the Mayor of Thurrock. At the T.A.A, there was also dancing and music, with the audience getting involved and participating. A DVD of Buckingham Palace was shown and refreshments were prepared specially for the event by various communities living in Thurrock.

Bhangra and Dhol maestro King Gurcharan Mall from Birmingham tweeted to Twitter and Facebook that he had uploaded a video of himself performing a song written specially for the Queen’s Jubilee. 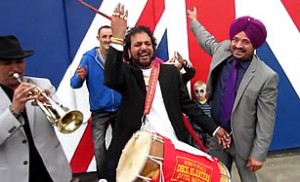 Down in Sandwell, celebrations were breaking out strong, which included the spectacular highlight of the ‘Oneness, our Commonwealth’ event with bhangra drums and dance street procession, drawing large crowds to join together to Sant Nirankari Mission. Following the procession was the raising of the Union jack and the national anthem played by the Salvation Army in Wednesbury, on Saturday 2nd June.

The event was organised by Sandwell Multi-Faith Network, together with the Sant Nirankari Mission, and there was something for all ages and interests.

Children enjoyed face painting, a bouncy castle and a host of fun games with an amazing chance to look inside a West Midlands Fire Service fire engine.

Harmohinder Singh Bhatia, from Sant Nirankari Mission UK, said: “Just as Commonwealth represents the unity and diversity of many countries coming together under one banner, the festivities reveal a sense one ‘oneness’ of all cultures for one mankind. Such community events show a sense of unity.” 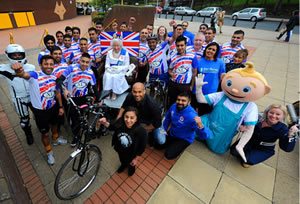 As far as the events were going, it wasn’t just parties with music and dancing. Punjabi Wolves celebrated the Queen’s Diamond Jubilee in a unique fashion, undertaking a traditional bike ride with a ‘Punjabi’ twist. Punjabi Wolves completed the XL Associates sponsored Rickshaw and Bike Ride from the ‘Golden Palace’ (Molineux Stadium) to Buckingham Palace on the 1st and 2nd June 2012.

The celebrations have now closed to an end, after many charities, families, parties and neighbourhoods have enjoyed the break and paid their tribute to Her Majesty The Queen, we too can say Congratulations for her sixty year reign.

As part of the senior DESIblitz team, Indi is responsible for management and advertising. He especially loves producing stories with special video and photography features. His life motto is 'no pain, no gain...'
Are British Asians losing Respect?
Changes to the UK Immigration Test