Pakistani Father arrested for Raping his Young Daughters for Years

A Pakistani father has been arrested for raping and sexually his young daughters after the mother submitted video evidence of the horrid crime.

"Mother, father does wrong things with me"

A Pakistani father from Thokar Niaz Baig in Lahore was finally arrested after a police raid for raping and sexually abusing his daughters aged nine and five for many years.

The arrest was ordered by the Chief Minister Punjab, on October 2, 2018. Led by officers IG Shehzad Akbar and SP Saddar Moaz Zafar, a house on Katarband Road was raided and the father was taken into custody at Hanjarwaal Police Station.

The arrest took place after compelling evidence of video clips showing the rape and sexual abuse of two young girls recorded by their mother secretly and handed over to a reporter at The Nation, a Pakistani news outlet.

Using a hidden mobile phone camera, the mother was forced to record the vile and harrowing sexual abuse of her young daughters by their father because when she reported the rape and assaults to police two years ago, he was arrested but then freed from Chuhang Police Station due to “unavailability of solid proofs against him”.

The mother initially went to the police after she learnt about the sexual abuse from her daughter, saying:

She then confronted her husband at that time:

“I was then speechless and I tried to ask him, but he instead started torturing me. And after that I went to police.”

Therefore, as hard as it was the mother was determined to free her daughters from the shocking sexual attacks they were enduring at the hands of their own father by recording the evidence to get the justice she desperately needed.

The distraught mother revealed that her husband had been raping his nine-year-old daughter for over five years, indicating the sexual assault started when she was only about four years old. The younger daughter, aged five, he had been raping and sexually abusing for over a year too.

Horrid and vile scenes of sexual molestation, rape and even torture of the minor girls were witnessed by police on the stealth recordings made by the brave mother.

The footage shows the young children in despair and seen crying with shivers and begging him to stop.

The mother told police that her husband had been using sexual enhancing drugs as well when he abused her daughters.

The couple got married about eight years ago and have five children. The husband whose permanent address is a village near Burewala moved to Lahore over ten years ago with no ties back home.

They were now living in a rented house on Katarband Road, Thokar Niaz Baig for over two years and this is where the sexual abuse took place.

The mother was also violently and domestically abused by her husband on a regular basis. He stabbed her with scissors in her tummy and broke her bones many times she told police, saying:

“He ties my mouth shut all night and uses all brutal techniques of torture.”

The girls and she were kept in a room which is where they lived with a small kitchen and bathroom adjoined to it.

The mother was fortunately helped by a neighbour who learnt of the abuse. She borrowed her the mobile phone because the mother could not afford one or even have one in fear of her husband.

When the mother finally managed to give the video evidence to the media and police, she pleaded with them that the father was alone with her daughters at home. 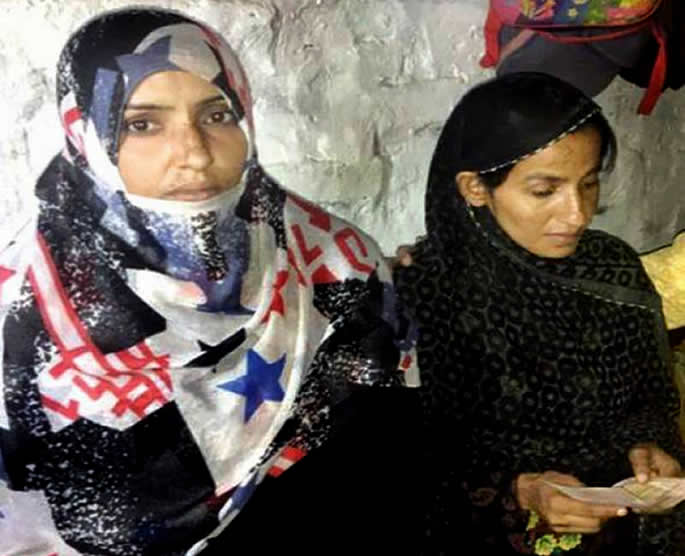 After seeing the shocking scenes, the matter was brought to the immediate attention of Chief Minister Punjab Usman Buzdar. He reacted promptly and ordered the arrest.

Upon the raid, the father denied all accusations and blamed his wife for trying to frame him.

The mother was also taken to Hanjarwal Police Station for a statement. Whilst she was there, her husband threatened her from his cell saying:

“You installed secret cameras and handed over clips to media. I will not forgive you.”

However, at the same time, he begged for mercy and promised he would change, saying:

“Give me last chance to become a good person.”

Whilst in custody the father eventually admitted and confessed to the charges of raping and sexually abusing his young daughters.

In reaction to the arrest, the Chief Minister Punjab said:

“I will follow the case personally. The investigation will be properly done and swift, and will be monitored at the highest levels. Children of our country will be protected by all the strength we have in us, they will be given justice and protection under the full ambit of the law.”

Since the arrest, the mother has still feared for the welfare of her daughters and their safety with a huge worry about their future.

To help, the Chief Minister Punjab has given Rs0.5 million in assistance to the mother along with assurances for their education.

The distressed family has been offered alternative free living accommodation and have been visited by the Child Protection Bureau team.

The girls will be seen by qualified psychologists to help with the horrific trauma and mental damage they have endured.

One psychiatrist stated that this case is of an extreme nature and it will take a very long time for the girls to recover from the long-term sexual assaults by their own father and it will certainly impact them in the future.

The mother has appealed to the Chief Justice of Pakistan that her husband should be given the death penalty for what he has done to her daughters.

Images courtesy of The Nation