A notorious tax fraudster who built a ‘palace’ in Pakistan has been released from prison, despite still owing £3 million.

he had secretly paid for a £2.3 million mansion

An infamous Birmingham tax fraudster who built a ‘palace’ in Pakistan has been released from jail, despite still owing more than £3 million in crime proceeds and interest.

The scam was exposed after police searched his Moseley home and found plans for his own ‘Buckingham Palace’ in Pakistan, complete with library, cinema and servant quarters.

In 2016, the fraudster’s sentence was increased by 10 years when he failed to pay a £2.2 million confiscation order.

Khan has since been released after serving half his default sentence.

The fraudster still has not repaid the £2.2 million order nor the additional £1 million interest.

It is believed Khan is still living in the same house he lived in when he was jailed.

The property is subject to a financial restraint order which was obtained by the CPS.

In non-payment cases, eight per cent interest is added annually to the original sum, meaning Khan now owes a total of £3,221,034.

“Our progress to date has been slower than we would like in this case.

“It is the obligation of Mr Khan to pay the confiscation order and remains so, despite having served the default sentence.

“There are a number of significant complications surrounding the recovery of the Birmingham assets.

“We have, however, acted on intelligence from the community and we conducted a warrant at the house in Moseley on 30 May. No weapons were found.”

The statement added the Crown Prosecution Service and the force “fought strongly to get this confiscation order, we continue to work together as we remain fully committed to enforcing it and getting back what we can as soon as possible.

“Our work continues, however, much of it has to remain in the background for now.

“We appreciate this is frustrating for people who want to understand more, but it doesn’t mean we aren’t doing anything.”

“I can confirm that on 10 April 2015 Birmingham Crown Court made a confiscation order for £2,209,090 against Mohammed Suleman Khan.

“The court gave him six months to pay the order and fixed a period of imprisonment of 10 years in default of payment of the confiscation order.

“On 4 February 2016 Birmingham Magistrates’ Court activated the default sentence of 10 years to run consecutive to the period of four years imprisonment for the offence of Cheating the Revenue.”

The CPS confirmed the outstanding unpaid money but did not say how it plans to recover it.

The original tax fraud case heard Khan had lived in a £500,000 house and drove a BMW, but had no obvious job.

The home belonged to relatives and only small amounts of money went through his bank accounts.

Despite concealing his wealth, detectives found he had secretly paid for a £2.3 million mansion to be built in Pakistan. 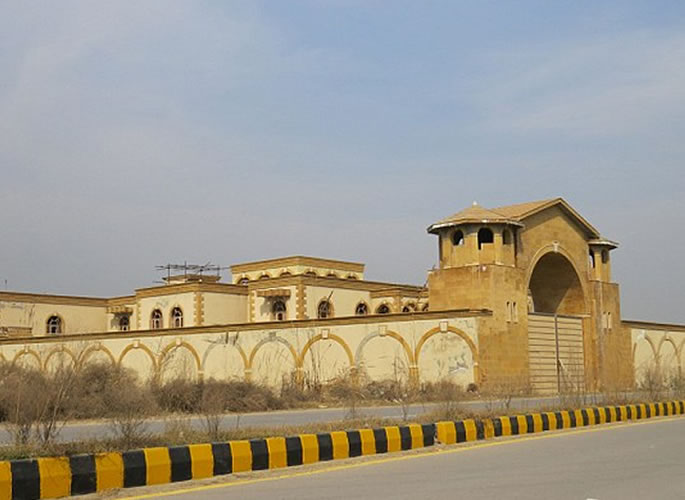 In court, his defence said he was a legitimate businessman who had earned around £400,000 over a nine-year period from debt collecting and other business interests in the UK and abroad.

However, police found no evidence of a legitimate debt collecting company.

Instead, they found he made over £1 million, without paying the required tax and National Insurance.

A search of the fraudster’s home found plans for the ‘palace’ in the Attock region.

The building’s outer shell and roof had cost Khan £893,000. Once completed, the property would have been valued at £2.3 million.

Khan did not say anything apart from “guilty” when he admitted cheating the public revenue at Birmingham Crown Court in November 2013.

Judge Menary QC had agreed that Khan was living beyond legitimate means.

He said of the ‘palace’:

“It is enormous with dozens of rooms, a library, servant quarter, cinema, underground parking and guard rooms.”

“It is the size of Buckingham Palace.’’

At the time of the fraud case, police said:

“The sentence handed out sends a clear message to all members of the community that evasion of tax and National Insurance are serious criminal offences.

“No matter your standing within the community, police and other agencies such as Her Majesty’s Revenue and Customs will seek to investigate and where appropriate prosecute individuals who are perceived or seen to be living a lifestyle or own property inconsistent with legitimately earned income.”