A nine-year-old Indian-Australian boy has made the final of one of the children’s categories of Australia’s most prestigious art competitions.

"I love nature and vibrant colours.”

A nine-year-old Australian-Indian boy has become a finalist in one of Australia’s most famous art competitions.

Viraj Tandon, from Sydney, is one of 10 finalists in the 9-12 age category of the 2021 Young Archie competition.

His turban is prominent, giving a nod to the Sikh identity and Tandon’s Indian roots.

Viraj painted his Nanu in a garden of flowers, birds and fruit.

The piece took Viraj Tandon almost three days to complete, and it blends both his Australian and Indian identities.

Viraj’s write up alongside the painting read:

“This is my Nanu and his secret garden which is tucked away at the back of his house.

“It is an enchanted garden full of beautiful fruit trees, colourful flowers and fragrant herbs that he loves to grow and share with us.

“Even the cockatoos love it so much that they often visit to feast on the figs and other fruit.

“I always laugh when he chases the birds away.

“I look forward to picking the chillies and lemons so that my grandmother can make chilli-lemon jam!”

Speaking of his process of painting his grandfather, nine-year-old Viraj said:

“I studied some photos of his, but mostly painted him from memory. He was very happy to know I became a finalist, and couldn’t stop hugging and kissing me!

“I observed the garden over many months. I love nature and vibrant colours.”

Viraj’s Nanu also expressed his pride in his grandson’s work.

“I think he’s done a good job – his portrait is a very close likeness of me.”

Speaking of his grandson’s love of nature which inspired his painting, he said:

“It’s the first place he goes when he comes over. He loves the fruit trees and the veggie patch.

“He’ll pick a fig or a lemon or some herbs, bring it to the kitchen and chop up for us neatly.” 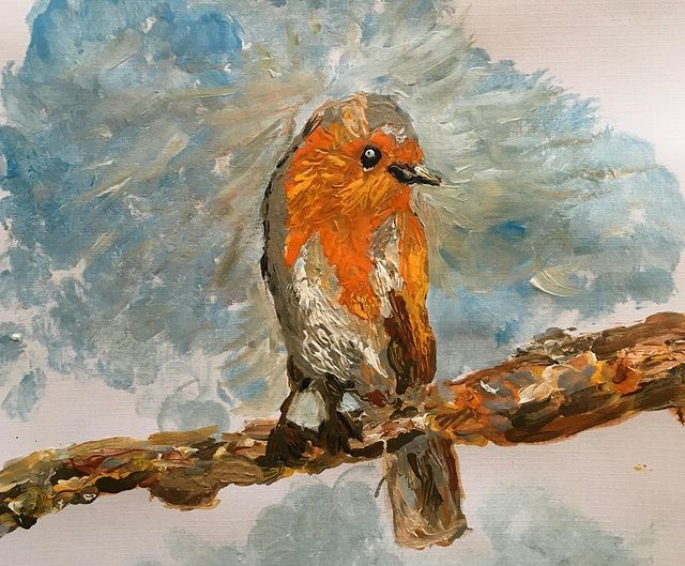 Viraj Tandon found his love for art at just four years old. He taught himself to work with watercolours, charcoal and acrylics.

Talking about the inspiration behind his work, Viraj said:

“I love animals. My first piece was an elephant in the jungle. I’ve made cockatoos, crabs, crocodiles, and I really like MF Husain’s horses.”

According to Viraj’s father, Rohit Tandon, Viraj’s talent only excelled during the Covid-19 pandemic.

He said: “We were schooling and working from home.

“I spent so much time with him alone as my wife Mandeep is a doctor and worked extra long hours.

“Painting was a way really to keep him busy. I got him loads of supplies and let him do what he wanted.”

Since setting his eyes on some mounted canvasses at the shops one day, Viraj Tandon’s love for art grew.

In just six months, he painted 40 pieces, some of which are larger than himself.

Viraj Tandon’s work has been picked up by the likes of National Geographic, ABC and the NSW Parliament.

The nine-year-old paints almost every day, and reads about artists who came before him such as Michelangelo and Da Vinci.

However, as shown by his love of colour, Viraj’s preferences lie with Picasso and Frida Kahlo. 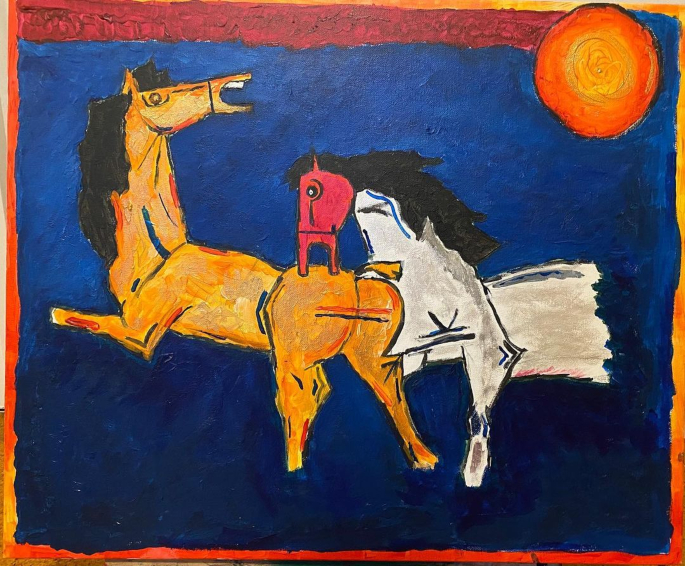 According to Viraj’s mother, Mandeep, he should be left alone to develop his own style.

She wants to nurture her son’s gift of art and says that he is a good self-learner.

“He picks up techniques from YouTube. Once he wasn’t quite getting the eye right for a particular portrait.

“He said ‘Mum, can I photograph your eye and study it?’”.

Now, Viraj Tandon is aspiring to paint for the ‘big’ Archies in the future.

As for the 2021 Young Archies, he already knows what he will do with his portrait. He said:

The artwork for the Young Archie competition is on the Art Gallery of New South Wales website.