Natalia Janoszek will join the likes of Nargis Fakhri and Amy Jackson to make her mark on Bollywood in a Hindi film, Flame (2015). DESIblitz has more.

“I am here to stay and want to do many Bollywood movies in the coming years.”

She will make her Bollywood debut in Flame (2015), a story about a simple woman who transforms into a confident person and fights for her belief, love and humanity.

Even before its release, the film has already bagged nine nominations for the International Film Festival Awards.

The former Miss Poland is super hyped about her first Bollywood film role.

She says: “The movie is a perfect vehicle for my entry into Bollywood. I have always wanted to be part of Bollywood as I am a dancer at heart. 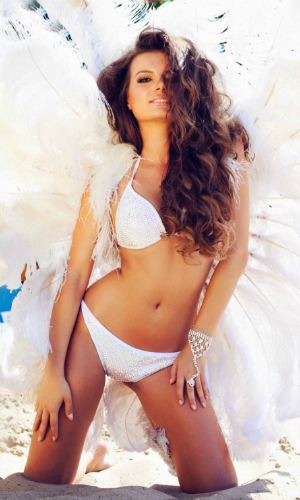 “Bollywood is the right platform for me to showcase my talent. I am here to stay and want to do many Bollywood movies in the coming years.”

Natalia is not just a pretty face. She has been a dancer since three years old and performed in dance festivals around the world.

She went on to win the World Champion title in solo freestyle at the World Dance Championships 2010 in Tokyo.

Producer Varun Singh says: “We needed an international artist for the role.

“When we were looking for a suitable face from Hollywood, we found Natalia Janoszek, a Polish actress in China where she had won the Miss Bikini Universe 2013 contest.”

He adds: “Natalia has immense potential to prove her mettle here in Bollywood and she fits the role better.”

The Polish hottie has been seen in US thriller, Coachella Massacre (2013). She will now join the likes of Nargis Fakhri and Amy Jackson in making her mark on Bollywood.

Scarlett is an avid writer and pianist. Originally from Hong Kong, egg tart is her cure for homesickness. She loves music and film, enjoys travelling and watching sports. Her motto is “Take a leap, chase your dream, eat more cream.”
Faran Tahir to star in Supergirl as ‘The Commander’
Indian Actor dates 365 Women in a Year