A murder investigation is underway after a mother and her three-year-old son were discovered dead by police in their London flat.

"Poorna and Kailash had been dead for some time."

A mother and son were found dead in a London flat on October 6, 2020, prompting a murder investigation.

Poorna Kaameshwari Sivaraj, aged 36, and three-year-old Kailash Kuha Raj were found at the address in Clayponds Lane, Brentford, shortly before 1 am.

Police forced their way into the London flat and also found a 42-year-old man with stab injuries.

He was treated by paramedics but was pronounced dead at the scene.

The man was later identified as Kuha Raj Sithamparanathan, Poorna’s husband and the father of Kailash.

“Although we are in the infancy of this investigation, it appears that Poorna and Kailash had been dead for some time.

“This is a murder investigation and my team will work diligently to establish the sequence of events that led to their murders and the death of Kuha Raj Sithamparanathan.

“Our initial enquiries have established that Poorna and Kailash had not been seen or heard from for some time, perhaps since around September 21.”

The incident is now believed to be a case of murder-suicide. Police say Kuha took his own life when officers forced their way into the flat.

DCI Harding continued: “We know the family often walked their dog, a poodle crossbreed, in and around the local area and I would ask anyone who saw them at any time in the last month to contact police so we can begin to build a full picture of their lives.

“I know I speak on behalf of all the officers in my team that words cannot sufficiently sum up the devastation that this horrific incident will have on the families of those involved.

“However, I can reassure them that we will do all we can to provide them with the answers they need about what has happened here.”

It was reported that their pet dog was also killed in the incident.

Officers had initially been called on October 4, 2020, by a family member raising concerns about Poorna’s welfare.

In the early hours of October 5, they went to the address “several times” but did not get a reply. After speaking with neighbours, officers decided to force entry.

The Directorate of Professional Standards has made a referral to the Independent Office for Police Conduct over the incident.

Next of kin have been informed and post-mortem examinations are set to begin on October 8.

Neighbours were shocked at the news and said the couple, who married in 2015 in Kuala Lumpur, was “lovely” and “very friendly”. 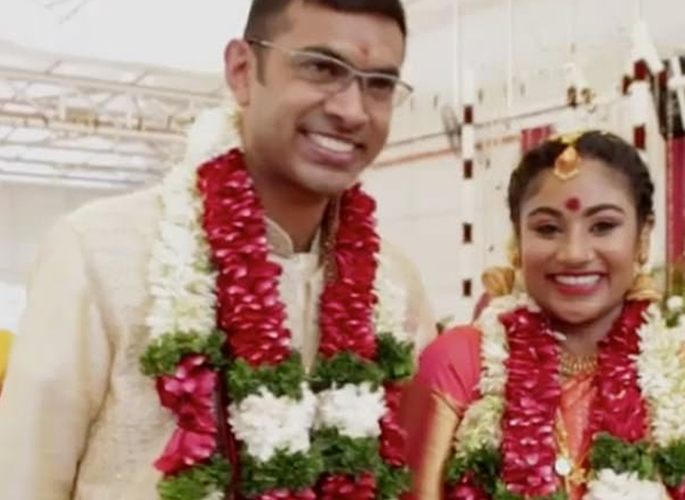 Jamila, who lives in a neighbouring block, said: “It’s tragic. They loved their dog and I’d see them all the time taking him out for walks. They were a lovely family and none of this makes any sense.

“The officers told me that there was blood all over the flat and that the dog had also been killed.”

One resident on the fifth floor of the London flat revealed they had heard the couple arguing “a lot”.

They said: “I could hear her screaming at her husband, telling him to take his medicine.

“Then on another occasion, he threw them out of the window, and I looked down and could see them on the ground.”

“This horrific incident has understandably caused enormous shock and concern among local residents and across the borough; all our thoughts are with the family and friends of those affected.

“I would like to thank our officers and paramedics from the LAS (London Ambulance Service) who worked tirelessly and professionally under extremely traumatic circumstances in responding to this incident.

“Our officers in the West Area Command Unit are doing everything they can to support colleagues in Specialist Crime as we work to understand what has led to this terrible incident.

“Local residents can expect to see officers at the scene and patrolling the local area to provide reassurance, and if they have any concerns, I would urge them to speak to our officers.”

Dhiren is a journalism graduate with a passion for gaming, watching films and sports. He also enjoys cooking from time to time. His motto is to “Live life one day at a time.”
US Indian Woman jailed for Forced Labour on Overseas Workers
Businessman to hand over £10m amid Laundering Allegations