Malaika Arora showcased her recent look at the Golden Glory Awards 2021. She flaunted her figure in a gold metallic mini dress.

Malaika set the internet on fire with her sultry poses.

Malaika Arora took to Instagram on December 23, 2021, to share her gorgeous look from the Golden Glory Awards 2021.

Before making an appearance at the event, Malaika took part in a photoshoot where she posed in a metallic, jacquard-patterned, gold mini dress.

Sharing the photos with her 14.2 million Instagram followers, Malaika Arora looked ready to party in a gold, metallic dress designed by Dundas.

The one-shoulder body-hugging dress was adorned in ruffle details at the sleeve and the neckline.

The gold dress featured one full sleeve and was covered in intricate ruched detailing all over.

Made in Italy, the mini dress concealed a zip fastening at the side and ended just above Malaika’s thighs.

Malaika accessorised her look with black ear studs and a silver ring from the house of Anmol Jewellers.

For footwear, she opted for a pair of classic gold pointed-toe stilettos. 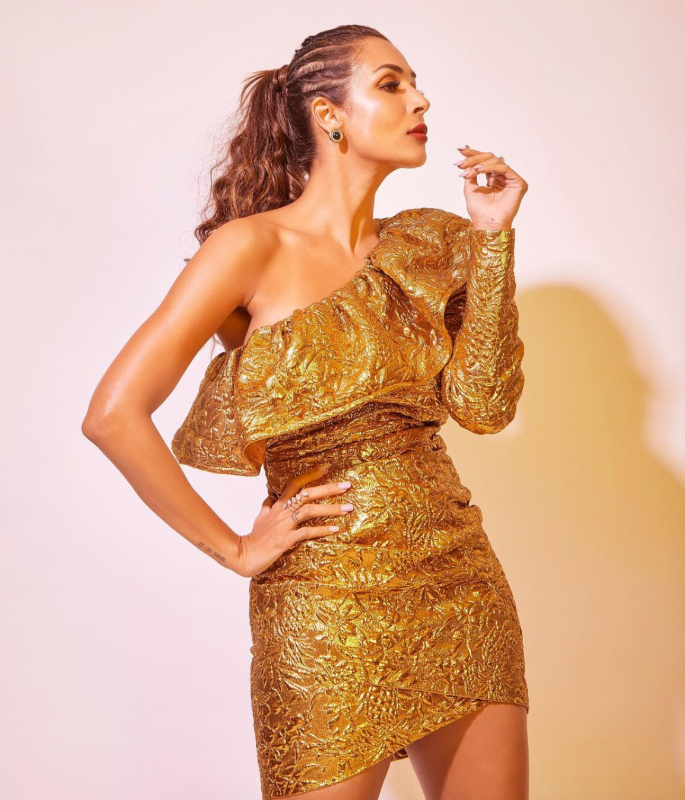 Styled by celebrity fashion stylists Tanya Ghavri, Esther Pinto and Hritika Naik, Malaika’s brunette hair was styled with small braids at the scalp and was tied in a high ponytail that featured soft waves.

Malaika set the internet on fire with her sultry poses. Her post amassed over 74,000 likes. 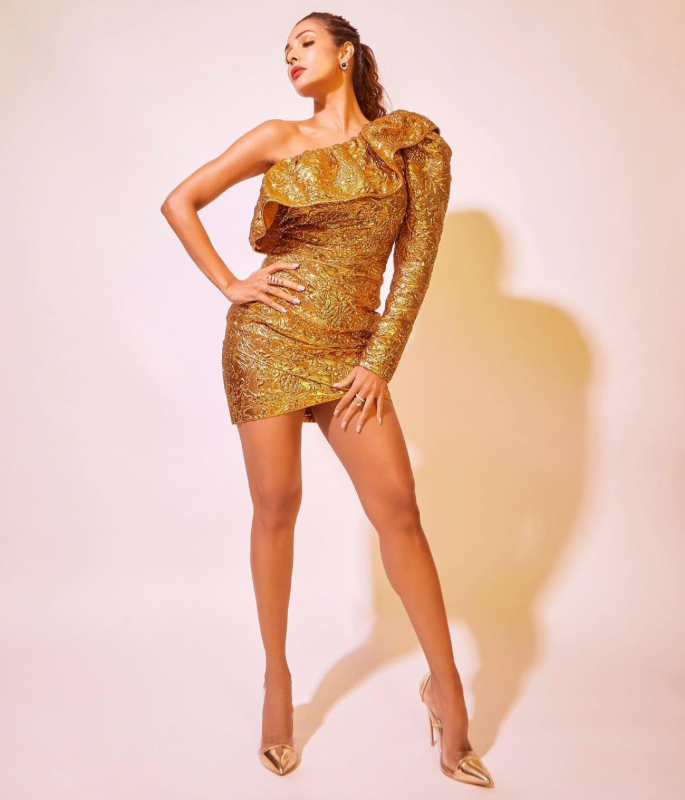 The Golden Glory Awards were held on December 22, 2021, at The Leela in Mumbai.

Malaika attended the awards show as a celebrity guest.

In other news, the Bollywood actress was recently brutally trolled for her walk.

In a video in which she wore a side-cut sequinned green dress with a deep V-neck, netizens couldn’t help but comment on her walk.

One user wrote: “What’s happened to her?”

Another added: “The glitter has gone into her brain.”

A third commented: “Why does she always walk so weirdly?”

Meanwhile, on the work front, Malaika Arora is currently seen as a judge on the popular reality show India’s Best Dancer 2 alongside Geeta Kapur and Terence Lewis.

The Bollywood diva shared a short video on Instagram on December 23, 2021, in which she could be seen dancing with her co-host Terence Lewis.

Ravinder is a Journalism BA graduate. She has a strong passion for all things fashion, beauty, and lifestyle. She also likes to watch films, read books and travel.
7 Top Bangladeshi Fashion Models You Need to Know
Deepika Padukone brings Hollywood Glamour in Velvet Gown