Historical and precious artefacts of the Indian leader, Mahatma Gandhi, have been sold under auction in the UK. The artefacts include letters, sandals and blood samples.

“If someone doesn’t spend a lot of money on preserving it, it will molder away."

May 21, 2013 saw a London auction of former Indian leader and hero, Mahatma Gandhi’s blood and other items profiting £300,000 in total.

Two blood specimens, preserved between microscopic slides, were initially thought to fetch between £10,000 and £15,000.

Only one blood slide went on sale along with a pair of Gandhi’s sandals, shawl, and a two page will from 1921, which is written in Gujarati.

The microscopic slide of blood only managed to generate £7,000 in total. The will auctioned well over the guide price at £55,000. The hand woven shawl made of linen which was reportedly hand spun by Gandhi himself, fetched an impressive £40,000, while the sandals fetched £19,000.

In addition, a rare signed photographic print of the leader holding his hands in prayer, sold at an unexpected £40,000.

These are just a few of the valuables belonging to Mahatma that have been auctioned over the last few years in the UK.

In April 2012, several items were sold at Ludlow Racecourse in Shropshire. The artefacts raised £100,000 in total. Among these items included a pair of the leader’s spectacles, bought by an optician in Gloucester for £34,000. 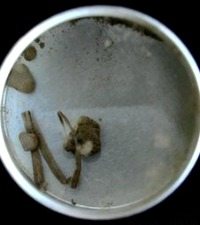 Soil and blades of grass that were spotted with what is thought to be the leader’s blood were sold for £10,000. The samples were taken from the scene of Gandhi’s assassination.

Earlier this year, in February, a letter typed by Gandhi while in prison, sold for a record £115,000. The letter is a plea for his release, and is considered to be a rare insight into Gandhi’s secret mission in vying for his nation’s freedom from British forces.

It is one of the most important historical artefacts from the leader, and was originally in the possession of a man in India who was a freedom fighter alongside Gandhi.

Mullock’s Auctioneers, who have been responsible for selling most of the Gandhi memorabilia, insist that the items are sold by close friends and well-wishers of Gandhi, and have been passed down through the family.

Those sold in Tuesday’s auction were from the offspring of an Indian family that cared for Gandhi while he was suffering from an illness in 1924. As expected, they drew in a considerable sum of money.

Mullock’s auctioneer, Richard Westwood-Brookes said: “The specimen of blood was given with his permission to the family because they regarded it as sacred.”

“To Gandhi devotees, it has the same status as a sacred relic to a Christian. It is an artefact which is revered by disciples of Gandhi, particularly in India and therefore that is the sort of person who would go for it.”

Unsurprisingly, the auction in the UK has caused some controversy among Indian’s worldwide. Many believe that such historical artefacts are Indian national treasures and thus, should be protected by the Indian state.

Notable Gandhi expert and writer, Giriraj Kishore has expressed his concern over the lack of action by the Indian nation being taken to keep Gandhi’s valuables intact.

Following the first auction in 2012, Kishore wrote a strong letter to the then President, Prahtibha Patil and Congress President Sonia Gandhi, urging them to do something to save these precious items. While he received a positive response from both parties, nothing as yet has been done to safeguard the artefacts.

Auctioneer, Westwood-Brookes is adamant that auctions are much better safe houses than museums:

“Not all museums are as secure as other museums, or as well looked after. If someone has spent £115,000 for a letter, we know that they are going to look after it,” he said. 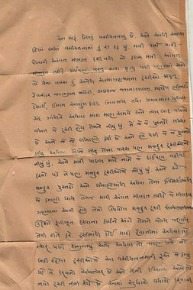 “If someone doesn’t spend a lot of money on preserving it, it will molder away, I’m certain about this,” he added.

Of course, Indians already have a long turbulent history with Britain following the British Raj over India. Stemming from the colonial period, numerous Indian national treasures were taken by Britain and still to this day, remain in their possession.

Notably, India’s Koh-i-Noor, which is now part of the British Crown Jewels, has caused much outcry among Indian nationals who believe the extravagant diamond worth millions belongs to their nation alone.

The British government however, has maintained an adamant stance that they will not return the precious diamond to India.

With such occurrences in mind, one wonders whether Britain has crossed yet another delicate line. Do they have the authority to sell and auction them as they please, or is it the right and responsibility if the Indian state to protect the valuables of its most-loved and admired leader?

Unsurprisingly, Tuesday’s auction has seen a split with the leaders devotees; those who brought their deep chequebooks and generated a record £300,000 on the one hand, and the dire-hard Gandhian’s both in the UK and India against the selling of such sacred relics on the other.

Aisha an English literature graduate, is a keen editorial writer. She adores reading, theatre, and anything arts related. She is a creative soul and is always reinventing herself. Her motto is: “Life is too short, so eat dessert first!”
Popular Cities to visit in Pakistan
Who was Bulleh Shah?