The world has become more integrated than before. Men and women from all backgrounds are forming interracial relationships. Love-struck Desi and British white individuals are falling in love, getting married, and having children. But, it all comes with struggles.

Many South Asians who stick to their own, still hold a great love. Elders traditionally have a strong influence, causing younger voices to fade out.

The younger generation may be understood by loved ones. If not, they face going in a different direction and ultimately not caring about the consequences.

Four love-struck Desi interracial couples share their love stories with DESIblitz, speaking of their unique unions and how they came together, despite the differences and challenges. 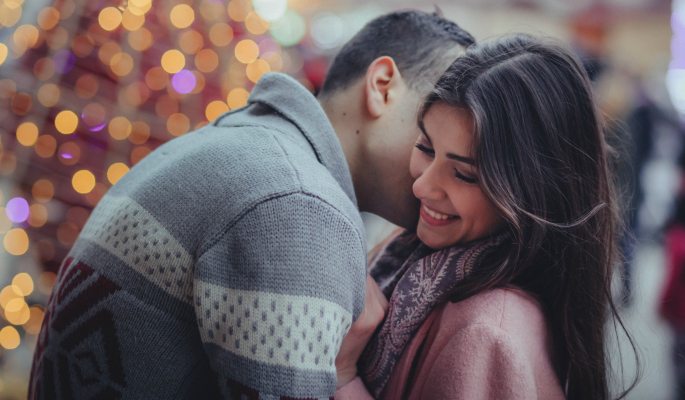 There are many couples who struggle to survive in a world surrounded by cultural differences. Young people living in the UK must fight to be with the one they love, or they give up to follow their family.

“I met Peter online a few years ago. We’ve known each other for a long time before we became a couple. We spoke over the phone every day and finally decided to meet.  On our first date, we spent the whole day together. I realised how strong I felt for him and I wanted to see him again. He wanted to as well.

“After two weeks, Peter asked me out because he didn’t want to wait. As a long-distance couple, we weren’t sure when we would see each other again. I have been with him ever since and I have no regrets.”

Marina and Peter hope everyone will accept their relationship.

They knew it was love at first sight. But, for Marina, it would be difficult to reveal this to her family:

“Don’t get me wrong, I love my family. But I got on edge when Peter came to see me. That’s why I decided to only see him where he lived and stay away from Wolverhampton. I feel more relaxed,” she says.

“My father doesn’t mind it. But, my other relatives will have plenty to say. I don’t want their judgement because I have fallen for someone different. I am from many cultures and my family need to accept that,” she tells us.

Is it right to restrict love?

Marina believes that: “Love shouldn’t be restricted, people shouldn’t ruin it. That’s taking something that’s vital to us as human beings. It shouldn’t matter on race or gender or age. When you know, you know. Love can’t be explained, it needs to be understood.”

Marina also mentions that people should always be themselves with those they love: “I’m still trying to understand love. I cannot describe it, but I am in love with the idea of love.”

However, both new and long-term couples still hide because they are afraid. The younger generation struggle with acceptance of multicultural relationships due to heritage and family values.

Being in a love-struck Desi interracial relationship can be tough. Some break, but many stay strong no matter what. 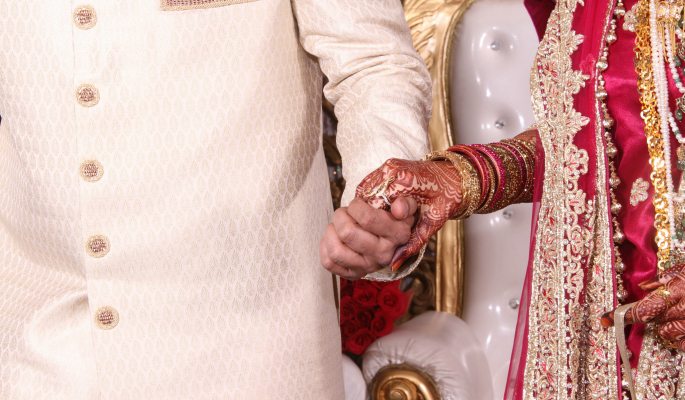 Another love-struck Desi couple from the West Midlands, Amir and Sinata, married two years ago.

They managed to find the balance between cultural differences. Amir tells DESIblitz how he met Sinata:

“I met Sinata through work. She sent me a friend request on Facebook. For a week, we talked through Messenger. But I got impatient with that being the only way to communicate. I then asked for her number.

“After a few promises I got her number and we spoke regularly. I asked if we could meet and she agreed. We went on several dates before we became a couple. We were together for over a year before she decided to call it off. She believed there would be no future for us. Her family would not agree to her having a boyfriend.

“Therefore I took it upon myself to try the traditional route and set up an arranged marriage. I managed to get hold of her auntie’s details. Then I asked my auntie to represent me. It’s common for Muslims to ring around and make families aware that they are planning their child’s marriage. My wife’s auntie decided to pass on my information to Sinata’s parents who agreed to meet mine.

“Several meetings between the families took place. They then agreed to the marriage if their daughter agreed. During this time Sinata and I acted as if we were strangers. We acted to only know of each other through work.”

“A date was confirmed for the wedding and now here we are.”

Many families are now allowing their children to marry into another race or religion. Elders may not agree. But, if the immediate family are happy, then most of the time multi-cultural relationships are born.

Amir believes that love means many things. But he says: “I’m still learning my way”. He plans to provide a better future for his family. Love is keeping him motivated.

There are many UK couples that can mix their cultural traditions into the modern world, without any problems. But, not all love-struck Desi couples have that advantage. 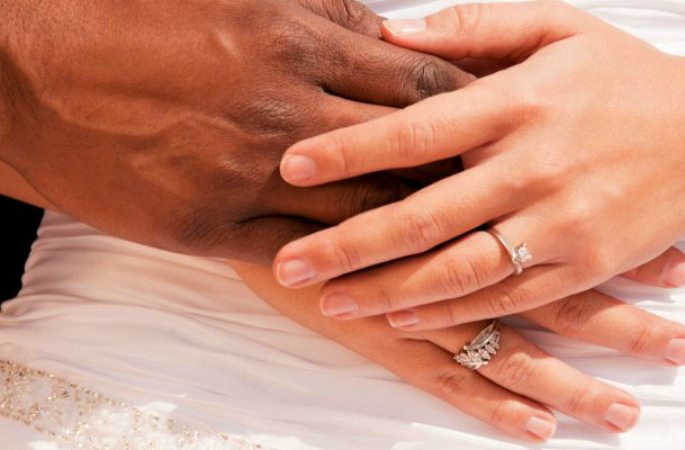 Aniz, also from the West Midlands, told DESIblitz how he met his wife Rachel.

In 1997, the girlfriend of Aniz’s brother, went to college to study nursing, where she had met Rachel. And, knowing Aniz was newly single, she wanted to introduce them to each other. She hoped things would work out:

“I met Rachel when I went to my brother’s house. I would go there often because I wanted to spend time with my niece. We spoke and hit it off straight away. We started to date. Then we moved into our house which we bought and we have been married ever since.”

Aniz and Rachel have been married for 20 years. They now have a little girl.

Sounds sweet and pretty simple? Well, Aniz and Rachel have both faced problems and hardships:

“We have always had problems. Especially marrying outside culture. She’s white and I’m Pakistani.

“Even now it’s still a problem. She doesn’t accept things. That’s why now it’s on the rocks and I’m fed up.”

Aniz says he wouldn’t get married and commit to anyone again. But, is it right to restrict love?

“You shouldn’t be restricted to marry in your own culture. However, it’s down to immediate family and personal experiences.”

“It’s all about differences and upbringing. Many Asians would go out with other cultures. However, when it comes to marriage, if their parents say ‘You’re marrying your own’, they will have no choice but to leave their current relationship.”

Aniz also mentions to be truthful and commit to the person. Accept one another as they are and who they are.

Unfortunately, Aniz and Rachel’s relationship is straining due to cultural differences, including faith. Aniz lost faith in love through his personal experiences. 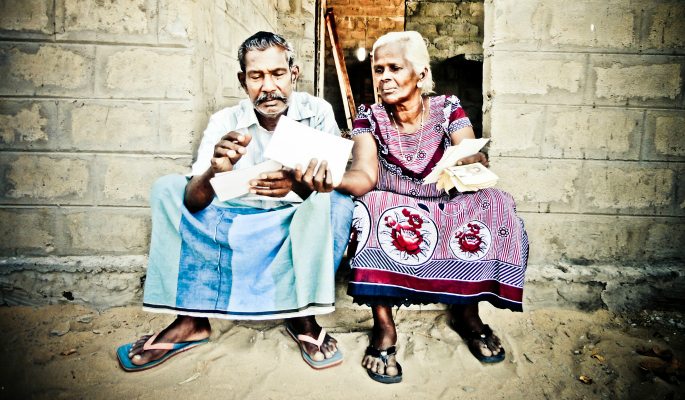 Society has dramatically changed since the older days. There was a time when family members took over decisions, such as marriage arrangements.

Mohammed and Meesha, originally from Pakistan, but now live in the West Midlands, had a traditional arranged marriage.

In 1965, Mohammed travelled to England to live and work. However, his family wanted him to marry and have children. So back in Pakistan, his mother and father decided to find him a wife.

Five years later, both Mohammed and Meesha’s parents came together. Upon agreeing to the marriage, it finally took place. However, they didn’t meet until their wedding day. But, from there, they fell in love.

Three months later, they came back to the UK to live and settle. They have been married for over 40 years and still going strong:

“I have love here and that’s why it keeps going,” they tell us.

Over the years, Mohammed and Meesha have had four sons and five grandchildren.

So, is it right to restrict love?

“Love is love. It makes you happy. But it is better to stay in the same culture,” say Mohammed and Meesha.

The older generation has a different view of love and marriage. They prefer to stick to their own.

Many love-struck Desi couples fight for love. But, there are those who stop believing or give up. Family members and friends end up controlling their lives.

However, nowadays, multi-cultural relationship stand a powerful ground. Just like others who stay within their own culture.

Rianna is a Broadcast Journalism graduate who enjoys reading, writing, and photography. As a dreamer and realist, her motto is: “The best and most beautiful things cannot be seen or even touched, they must be felt with the heart.”

Images Courtesy Of: CNN and brunel.ac.u.