"Call me smart before you call me hottie."

Titling the video ‘If Bollywood Songs were Rap’, Lilly created three music videos and performed her own rap renditions of popular Bollywood tracks.

Her post was captioned: “I love Bollywood music and I love rap so I thought I’d combine the two.”

The first was an adaptation of the famous song ‘Choli Ke Peeche’ from the 1993 film Khal Nayak.

The original track saw an iconic dance performance by Madhuri Dixit and at the time of its release, it was deemed controversial.

This was due to the central lyrics translating to ‘What’s behind your blouse’.

But in Lilly Singh’s rap version, the comedian sports a yellow lehenga as her lyrics highlight the need to know a woman’s personality rather than noticing her beauty.

As the instrumentals play, Lilly begins:

“Every rapper talking about the shape of her body.

“Every movie plot about her wedding, that’s her shaadi.

“Call me smart before you call me hottie.”

While the original track was set in a brightly-lit venue, Lilly opts for the more modern setting of a club complete with pole dancers.

Throughout her original song, Lilly emphasises the strong woman who uses intelligence and ambition to get noticed rather than her sexuality.

The video transitions into a classroom setting as Lilly Singh creates a rap version of the 3 Idiots track ‘Aal Izz Well’.

Now in a classroom, Lilly raps the film’s plot, which explored the stress of student life, marriage, money as well as the main characters’ backstories.

She opens her track: “My life gets so out of control.

“Got 20 problems I made up in my head. Anxiety sleeps next to me in my bed.”

The music video concludes with Lilly and the backing dancers holding buckets as they lip-sync:

The dance performance is similar to the one by Aamir Khan, R Madhavan and Sharman Joshi in the 2009 film. 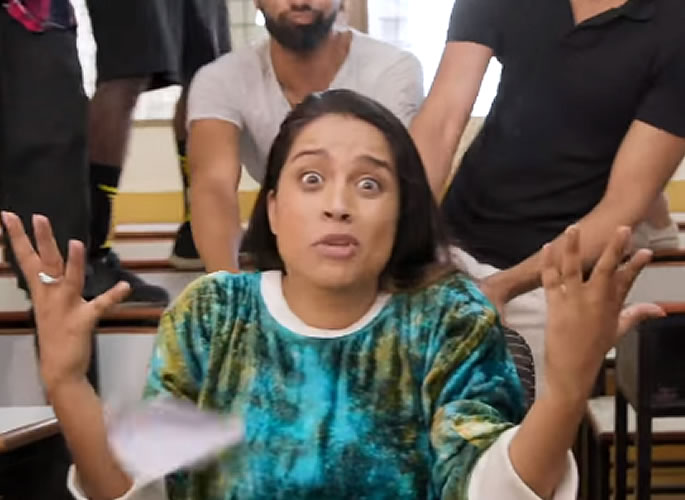 Lilly Singh’s final track was an adaptation of ‘Aankh Marey’ from the Ranveer Singh and Sara Ali Khan film SIMMBA.

In her version, Lilly mimicks Ranveer as she sports a black vest whilst on a basketball court.

She then notices the referee and is immediately attracted to him.

Lilly remains focused on the referee instead of the game but then a female referee with bright purple hair walks in and Lilly falls head over heels with her.

“But then a queen winks at me.

“She rock my world. This stunning girl. You see her hair, that effing hair.”

While Lilly remains distracted by the new referee, she also hopes that she notices her.

Her lyrics display all the things Lilly would do to win the female referee’s heart. But she remains focused on the game.

Then, as the popular ‘Aankh Marey’ music plays in the background, Lilly expresses her romantic interest in both referees but neither seems interested in her.

The fun rap recreations prompted a lot of love from fans, with many praising Lilly’s rapping abilities.

One said: “Lilly what can the world do without you, I wonder. The lyrics issa banger! Well-coordinated.

Another commented: “Wow, you sound great. You’re a natural rapper love the way you mixed it up.”

A third said: “You are incredible Lilly! Thank you! Much love and blessings!”

Dhiren is a journalism graduate with a passion for gaming, watching films and sports. He also enjoys cooking from time to time. His motto is to “Live life one day at a time.”
Bigg Boss 15’s Umar Riaz releases New Single ‘Mera Suffer’
Kriti & Akshay Fall in Love in ‘Meri Jaan Meri Jaan’