Netflix series ‘The Big Day’ show LGBTQ South Asian marriages and how they are adapting to centuries-old marriage traditions.

"he wanted to be the one to first receive any awkwardness"

LGBTQ South Asian marriages are being shown on the Netflix docu-series The Big Day and it highlights that they can have their dream weddings too.

One of the most memorable couples on The Big Day was Tyrone Braganza, from Goa and German-born celebrity makeup artist Daniel Bauer.

Viewers watched how the couple organised their wedding so that it honours the tradition of Tyrone’s Goan family, Daniel’s German ancestry and the South Indian culture of Daniel’s Chennai-born grandfather.

Although same-sex marriage is still prohibited in India, the wedding was widely covered in the Indian media.

The show also introduced the viewers to the couple’s parents, both of whom were initially apprehensive but eventually came around to support the couple.

Away from The Big Day, even US South Asians with supportive parents say there are often anxieties when it comes to the extended family. 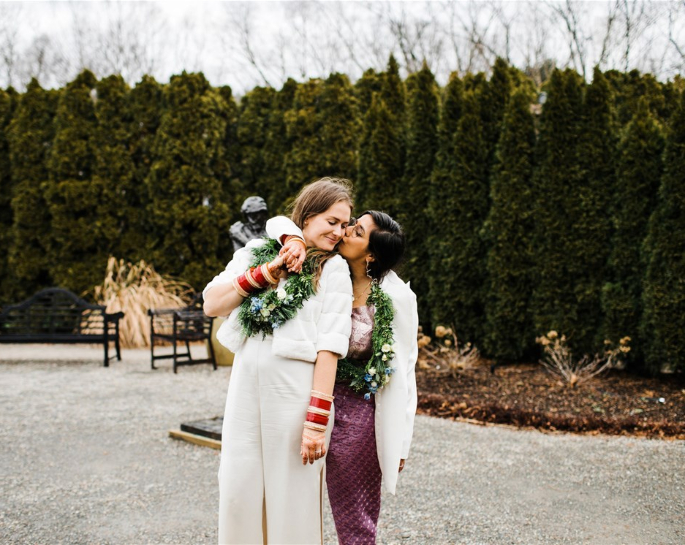 When Pallavi Juneja came out to her parents as a teenager, they quickly embraced her identity.

She explained: “My dad took a trip to India and went to every family member’s house with a box of sweets and personally invited them to our wedding.

“He did that not only because it’s a personal and kind thing to do, but also because he wanted to be the one to first receive any awkwardness or discomfort.”

The extended family welcomed the marriage and many had planned to travel to the US for the wedding.

However, the Covid-19 pandemic resulted in a smaller ceremony in January 2021.

Pallavi said: “They’ve been very supportive and have been really happy to meet Whitney Rose, even though it’s only been on FaceTime.”

According to Sapna Pandya, a Washington DC-based pandit, Pallavi’s story is a typical one.

When Sapna told her family she wanted to marry her partner Sahar Shafqat, her parents were initially hesitant about a public ceremony.

Sapna recalled: “They were just apprehensive about it and asked: ‘Who’s going to come to your wedding? Why would you put yourself out there in such a vulnerable way?'”

However, their fears were gone after seeing the support the couple received.

“They got to see how many people were actually there to celebrate us.”

When working with couples to plan their weddings, she looks back on the lessons she learnt from her grandfather, a priest.

She said: “I used to go to weddings with him and observe. And I think when he passed, I just felt like I wanted to be able to carry on that legacy.

“He did it for his community, which was the Gujarati community here.

“I wanted to do it for my community, which is the South Asian queer community.”

Sapna is also aware of adapting centuries-old wedding traditions in an affirming way firsthand, given that her wife was born in Pakistan.

She explained: “We wanted to make sure that we were integrating both Muslim and Hindu traditions. So we wrote our own ceremony, essentially.”

Their wedding included Hindu traditions but it also had Muslim traditions.

But despite making the changes, many LGBTQ couples have spotted just how narrow certain rituals can be.

Pallavi and her mother worked to adapt the rituals so that it would include both brides.

For Pallavi and Whitney Rose, they were both draped in shawls by their mothers.

Pallavi said: “My mom used the one that she was given by her mother-in-law, and she then gave that to my wife.

“And then the shawl that was given to her by her own mother was then lent to my wife’s family, and they gave that to me.”

The Big Day viewers hope that the positive portrayal of same-sex marriage will result in further acceptance of LGBTQ South Asian people.

He recalled: “My cousins were like, ‘Have you seen the gay wedding episode?'”

He married his husband Stephen Shinsky in May 2019 in a ceremony that highlighted Indian traditions.

“I think being able to see other people on TV or reading about them helps normalise it and takes away some of the stigma that we have in our culture.”

Dhiren is a journalism graduate with a passion for gaming, watching films and sports. He also enjoys cooking from time to time. His motto is to “Live life one day at a time.”
Tadap: Suniel Shetty’s Son makes Debut
Netflix Indian animation ‘Bombay Rose’ an Oscar winner?