During an event for her film Judgementall Hai Kya, actress Kangana Ranaut got into a heated argument with a journalist who was present.

"This is not the right way Kangana, you cannot intimidate a journalist"

Bollywood actress Kangana Ranaut got into a heated row with a journalist during the launch event for the song ‘Wakhra’, which is from her upcoming film Judgementall Hai Kya.

She was there alongside producer Ekta Kapoor and choreographer Bosco Martiz, as well as the lead actors such as Rajkummar Rao.

The film has not been released yet and it has seen a fair share of controversies. The original title of Mental Hai Kya was changed after the Indian Psychiatric Society objected it and wrote to the Censor Board.

In their letter, they claimed that it violated many sections of the Mental Health Care Act 2017. The title was later changed.

At the song launch event, Kangana got into an argument with a journalist and accused him of writing negative reviews about her film, Manikarnika: The Queen of Jhansi.

The actress told him: “You are bashing my film Manikarnika, have I done a mistake by making a film?

“You are calling me a jingoistic woman for making a film on nationalism. Is it my mistake?”

The reporter then stopped her and firmly denied writing anything negative about her film.

He said: “If I may, with your permission, I did not even tweet anything about Manikarnika.” 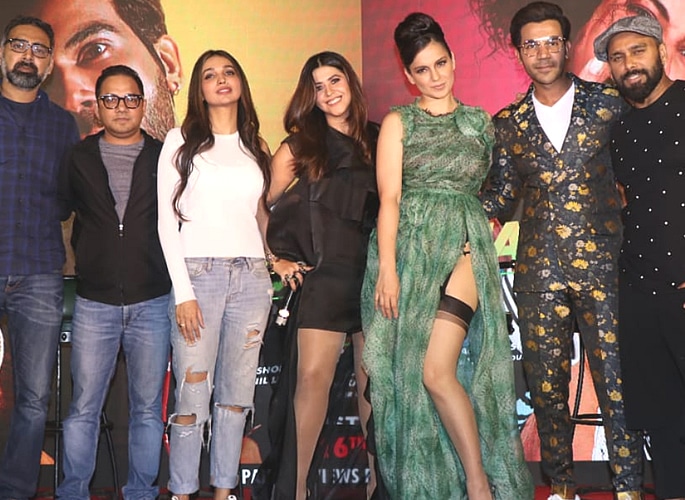 The journalist then went on to say: “This is not the right way Kangana, you cannot intimidate a journalist because you are in the position of power.”

Following the comments, the event host, RJ Suren tried to calm the situation before taking away the reporter’s microphone.

This caused the situation to escalate and it led to another reporter becoming enraged. He shouted at the host for taking the microphone away and called the situation unfair.

The event managers from the PR firm spoke to the reporter and stated that they will address the situation.

When the situation calmed down, Kangana added:

“And I didn’t mean to intimidate anyone, I am just being very candid, that is how everyone is talking here.”

The actress then spoke to the reporter:

“You came to my van and we had lunch together. We’ve had an interview together and after that, of course, there are things that have been happening so don’t say that I am intimidating.

“You spent at least three hours in my van, okay so you are a friend. In that context, after you came out of my van, things have changed drastically.

“I know you personally so don’t try and tell me that I am intimidating.”

The reporter continued to call the actress unfair and denied ever having lunch with her.

The row between the reporter and the actress continued until her co-star Rajkummar stepped in and tried to handle the situation.

Judgementall Hai Kya is directed by Prakash Kovelamudi and is set to release on July 26, 2019.

Dhiren is a journalism graduate with a passion for gaming, watching films and sports. He also enjoys cooking from time to time. His motto is to “Live life one day at a time.”
Actress Nusrat Jahan marries Nikhil Jain with Grand Reception
Yasir Hussain proposes to Iqra Aziz at Lux Style Awards 2019