Jasmin Bhasin exuded elegance and walked the ramp with confidence as she made her debut at Indore Times Fashion Week 2022.

"I just felt so happy wearing this outfit"

Jasmin Bhasin slayed as she made her ramp debut at Indore Times Fashion Week 2022.

She was a showstopper in her outfit as she wrapped up Day Two of the finale show.

Wearing an extravagant gown from fashion designer Samant Chauhan, Jasmin oozed confidence as she strutted down the ramp.

It was a vibrant outfit that lit up the room and prompted huge cheers from those in attendance. 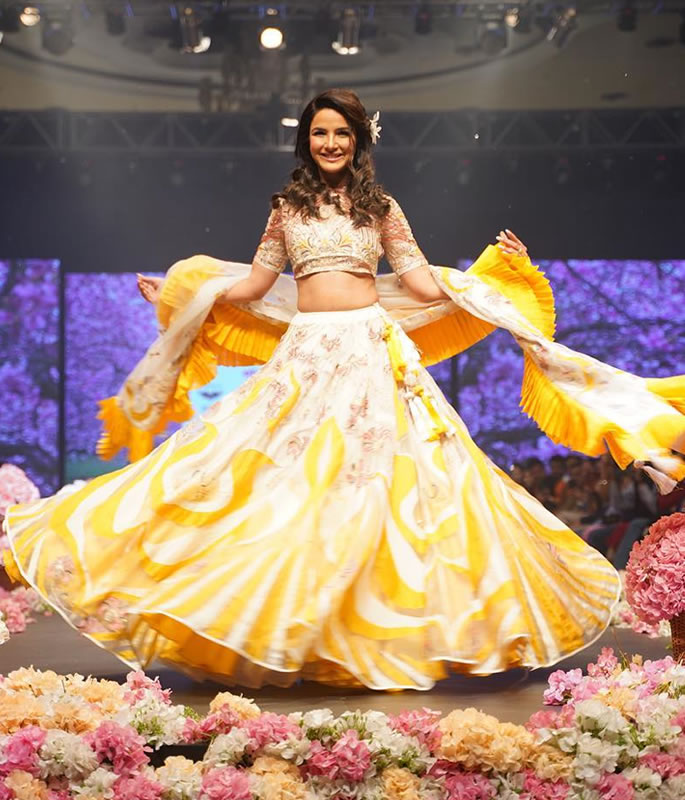 Jasmin opted for a few dainty rings and bracelets for added class but ensured that her outfit was the centrepiece.

Her brunette hair was styled into classic curls and she aptly chose Jasmine flowers to go in her hair.

It may have been Jasmin’s debut but she made it look easy as she smiled and twirled for the crowd.

Baskets of flowers graced the ramp and Samant later came out, prompting pink confetti to fall.

The pair thanked the crowd and cheered as they closed the event. 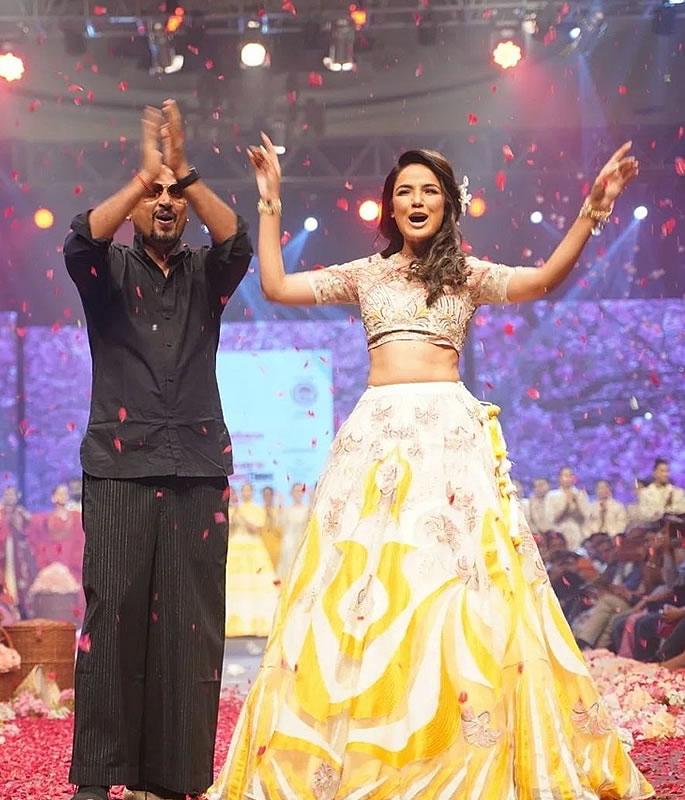 Speaking about his collection and Jasmin’s outfit, Samant said after the event:

“I’ve never done this kind of show before because I believe in very spontaneous ramp walks.

“This was the first choreographed show and I just loved it and what about Jasmin, she just stole the show.” 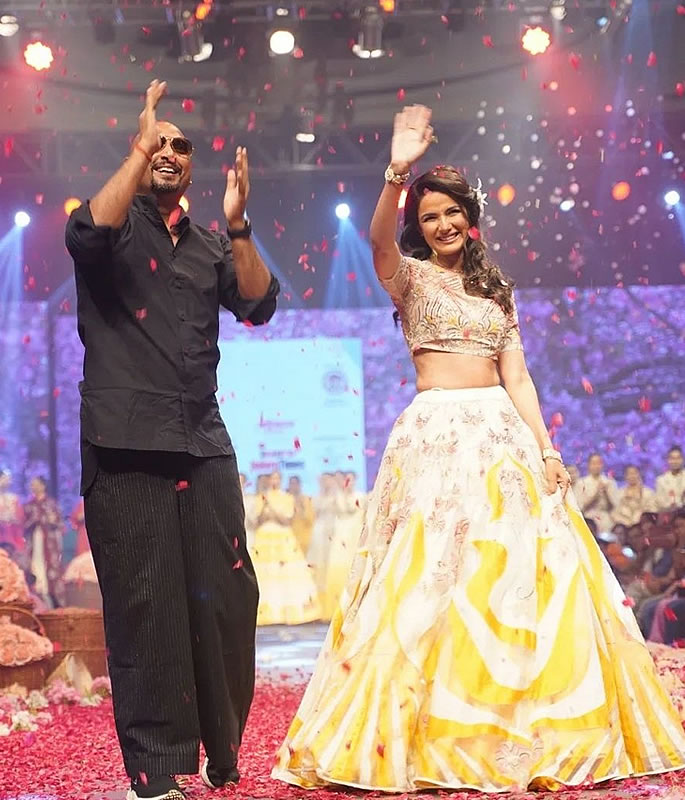 Jasmin added: “That’s so sweet of you, I just felt so happy wearing this outfit, it is full of happy colours, it was just the energy that was coming out of me.”

“It was fabulous the way she walked and the crowd cheering for her, it was amazing, unbelievable.”

On her walking the ramp, Jasmin said:

“I thought I’ll get nervous but I didn’t. I tried my best because I was wearing such an amazing outfit, I wanted to do justice to it because I think it is really beautiful, amazing, lively colours and very comfortable also.” 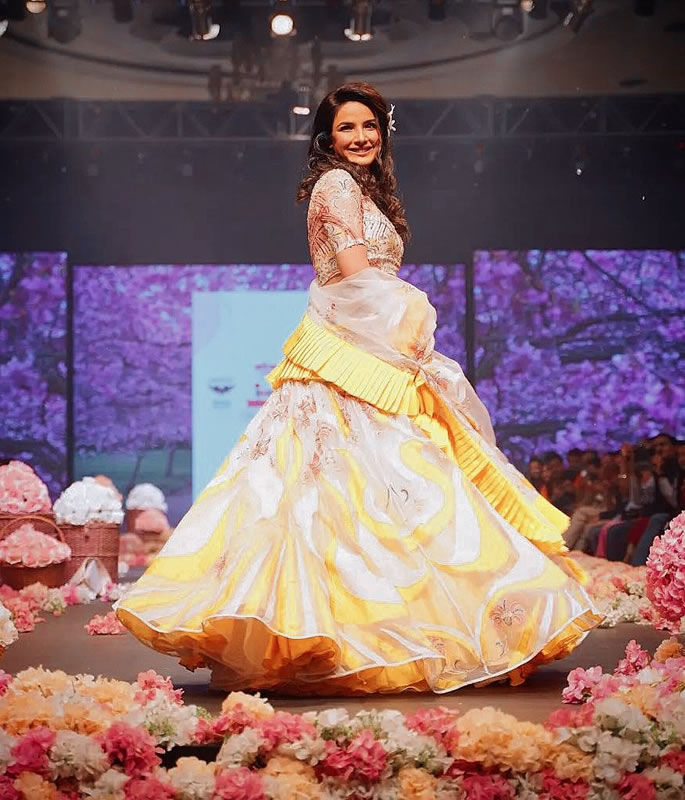 Jasmin went on to discuss her personal sense of style.

She said: “I think I always put comfort first and then I just love dressing up, I love dolling up sometimes so whatever my mood is, I dress accordingly.”

Pointing at her outfit, she added: “This is very much my style because it is comfortable, you can walk around and dance in it.”

Jasmin confessed that prior to big events, she eats a lot because if she is happy, she can “conquer anything.” 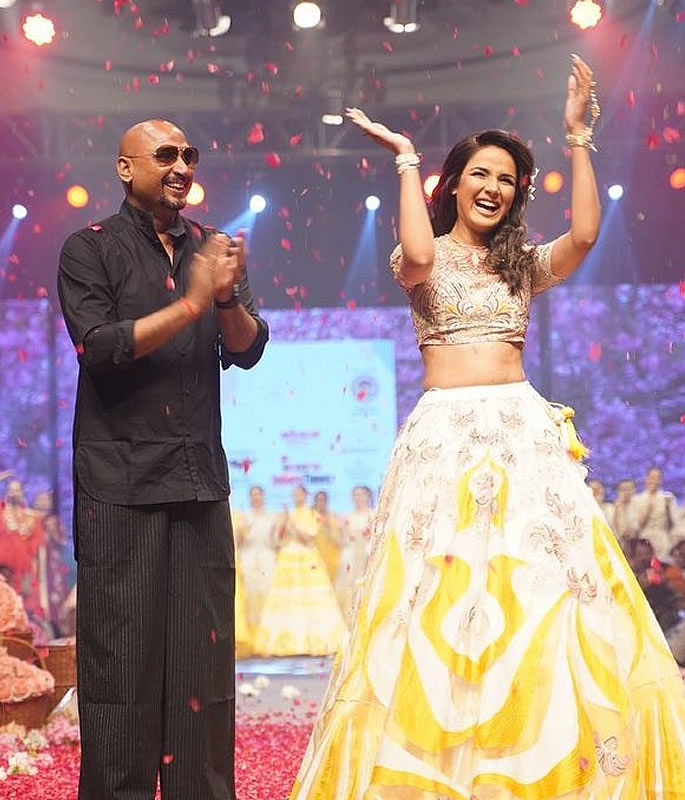 Jasmin also revealed how much effort she puts into her looks.

She said: “I believe as artists, the way we look is an asset and adds a lot of confidence.”

On her beauty secret and how she takes care of her mental health, Jasmin concluded:

“Happy girls are the prettiest, be happy, do whatever makes you happy. Just be happy and you will always be pretty.

“My pets are my therapy, for my mental health and happiness.”

On the work front, Jasmin Bhasin is gearing up for the release of Punjabi film Honeymoon, which also stars Gippy Grewal.

Dhiren is a journalism graduate with a passion for gaming, watching films and sports. He also enjoys cooking from time to time. His motto is to “Live life one day at a time.”
19 Iconic Bollywood Costume Ideas for Halloween
Poonam Pandey quotes Picasso along with Sultry Pics