A group of Indian women have been arrested for operating a honey trap sex racket in the cities of Indore and Bhopal, Madhya Pradesh.

"I will get money and you will get a government job."

A group of Indian women and a man have been arrested for running a honey trap sex racket in Madhya Pradesh.

They had targeted Indore Municipal Engineer (IMC) Harbhajan Singh after Aarti conspired with the group.

According to the police, she befriended Shweta Vijay Jain and saw her and her accomplice’s luxury lifestyle. Aarti also wanted to have such a lavish life.

When Shweta introduced her to Singh, Aarti came up with a plan. She initially tried to trap him directly and sent several WhatsApp messages to him.

She also met him in a cafe and at a restaurant in Indore. When she felt it was difficult to make a video, she included Monica.

Aarti convinced Monica that Singh was rich and later told her: “I will get money and you will get a government job.”

Aarti also believed that when the honey trap video went viral, her reputation would not be disgraced.

Monica and Aarti planned to meet Singh at a hotel on August 30, 2019, and had gone with Rupa Ahirwar.

Police officers later found out that she was not involved in the honey trap scheme as she went there to pick up something before leaving for work.

However, the two Indian women were unaware that the police knew about their operation and were waiting at the hotel. Monica and Aarti were soon arrested.

Officers seized several fake Aadhaar cards as well as the money from Singh.

It was revealed that Aarti’s brother studied at a college in Indore and had attended his sister’s hearing on September 22, 2019.

Shortly after her arrest, her brother messaged Singh and requested him to get his sister released.

On September 23, 2019, Aarti and Monica claimed they were feeling unwell. They were taken to the hospital for a medical checkup before returning to police custody. Both have been remanded until September 27, 2019.

Two petitions were filed at the High Court. One petition demanded that all video footage, CDs, mobiles, computers and laptops related to the case be taken under the supervision of the court.

The petition stated that the evidence could be tampered with if it is not done. 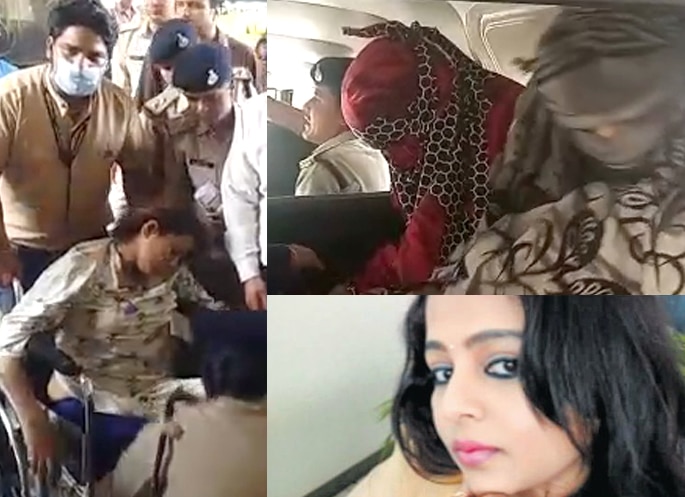 The second petition stated that the engineer should be named as an accused. As a result, Singh was suspended as the incident has harmed the IMC’s reputation.

“The IMC official getting trapped in the racket is shameful and has dented the civic body’s image.”

In order to extend the remand of Aarti and Monica, the police said that they both blackmailed big personalities in the past.

They created bogus Aadhaar cards and many videos in various hotels.

As well as the two Indian women being sent to prison, the driver Omprakash was also jailed until more evidence has been acquired.

Police officers identified Shweta Vijay Jain as the leader of the group after she made a video of a person in the past.

She was supposed to blackmail him but the person was able to expose her by filming her and uploading the footage. She had contacted the Bhopal Cyber Cell and requested for the video to be deleted.

Shweta was later arrested along with the other suspects. The investigation is continuing.

Dhiren is a journalism graduate with a passion for gaming, watching films and sports. He also enjoys cooking from time to time. His motto is to “Live life one day at a time.”
Beauty Blogger Amna Atiq abused in Marriage commits Suicide
Indian Husband married Multiple Women using Matrimonial Sites