The intense flavours of Indian cuisine can be incorporated into different dishes including pasties. We have a selection of delicious pasty recipes to try.

it has the exotic flavours of a delicious curry.

There are many types of pasties to try out but Indian pasty recipes definitely add a Desi twist to traditional pasties!

Pasties are mostly associated with Cornwall, England. The pasty is made by placing meat and vegetables on one half of a flat shortcrust pastry circle and then folding it in half to seal and bake it.

It uses similar ingredients to a pie but with a pasty, it can simply be picked up and eaten.

While the most traditional is the Cornish pasty, variants have made its way across the world and that includes India.

It is a popular food in the country and the flavours have been elevated with the inclusion of spices.

As more people are willing to try out new flavour combinations, we have seen classic Indian dishes incorporated into a pasty as well as Indian twists on traditional types of pasty.

With this selection of recipes, some will take more time as the pastry is made fresh as opposed to other recipes which use ready-made pastry. 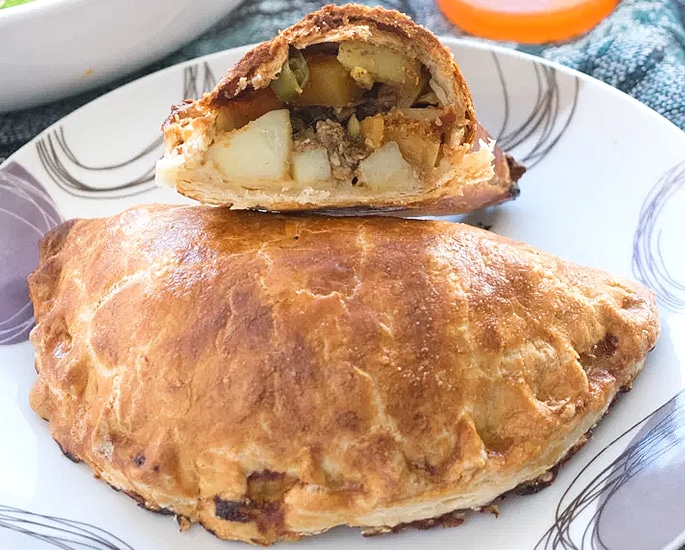 The Cornish pasty is a massive favourite in the UK but as more people are willing to experiment with flavour combinations, it is no surprise that there is an Indian version.

This pasty recipe looks like a traditional Cornish pasty but it has the exotic flavours of a delicious curry.

The mixture of beef, potatoes and swede makes for a filling dish but the addition of Indian spices add an extra level of heat.

All of this is folded into a pastry which becomes crisp and flaky when baked.

This recipe was inspired by Halal Home Cooking. 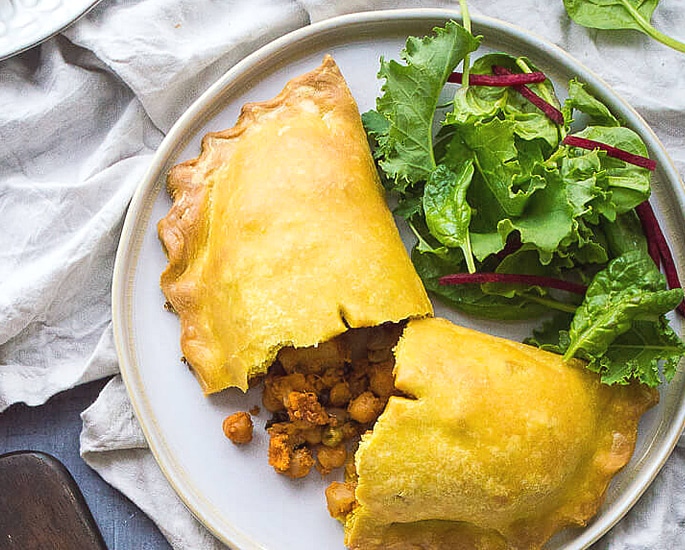 As there is a lot of vegetarian food within Indian cuisine, it is only natural that there are vegetarian pasty recipes.

This particular recipe is suited for vegans as alternative ingredients are used. For example, dairy-free margarine and soya milk are used when making the pastry.

The filling contains a mixture of vegetables along with a plethora of fragrant spices.

This recipe was adapted from Domestic Gothess. 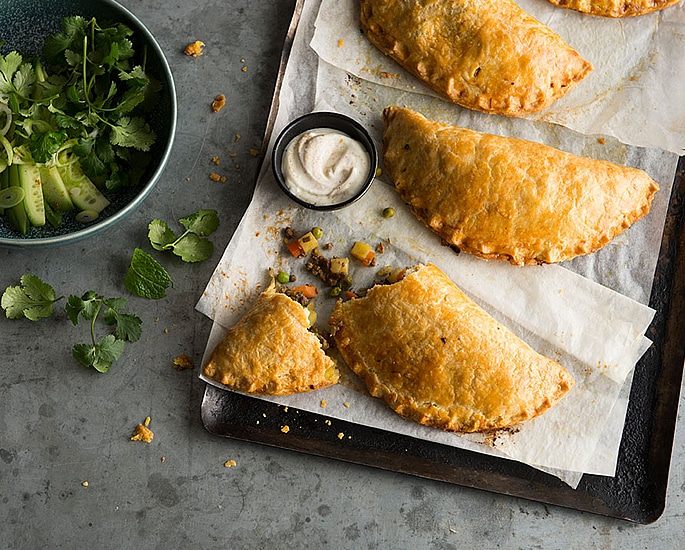 Mince is very versatile as it can be made into a variety of dishes. It is no surprise that spicy lamb keema pasties are one of them.

This pasty recipe is similar to the traditional Cornish pasty but it is made with lamb mince instead of pieces of beef.

Along with the spices, potatoes and carrots are added to give the pasty more body, making it much more filling.

This recipe was inspired by SBS. 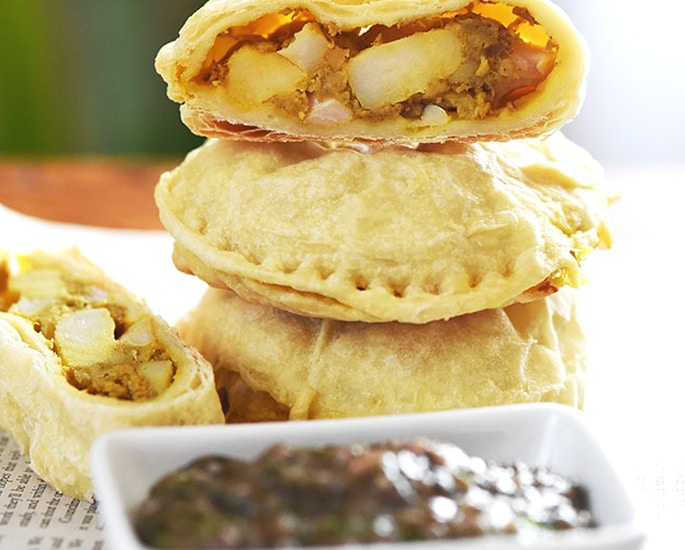 This pasty recipe blends together pastry and the Indian classic aloo gobi.

The variety of textures from the potatoes and cauliflowers is a delicious addition to the flaky puff pastry.

Unlike other pasty recipes, this one takes far less time as it uses readymade puff pastry but you can make your own if you prefer.

This recipe was adapted from Mighty Mrs. 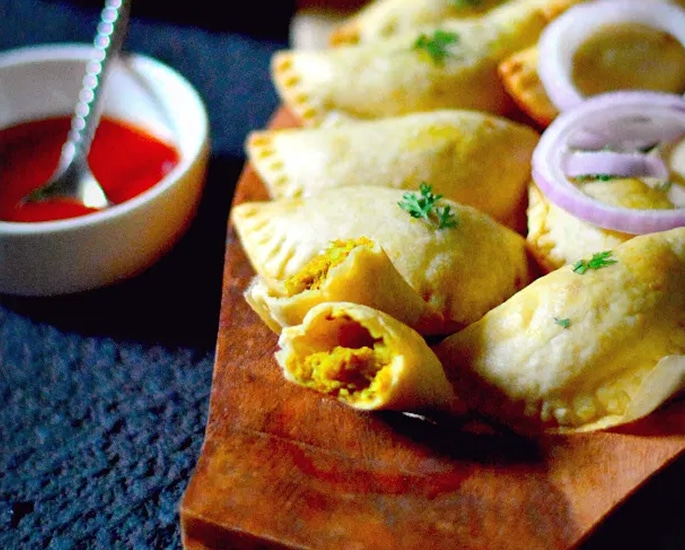 This fish pasty recipe is a healthier alternative to meat pasties but they are just as delicious. It is also much lighter meaning that it makes for an ideal snack.

The exterior is flaky and buttery pastry that is golden in colour while inside contains pieces of delicate fish along with a range of aromas coming from the different spices.

This recipe can be tailored to your preferences as any fish that you like can be used, just make sure that it is boneless.

It may be a surprising filling to go for but it will be a tasty alternative to other pasties.

This recipe was inspired by Saffron Streaks. 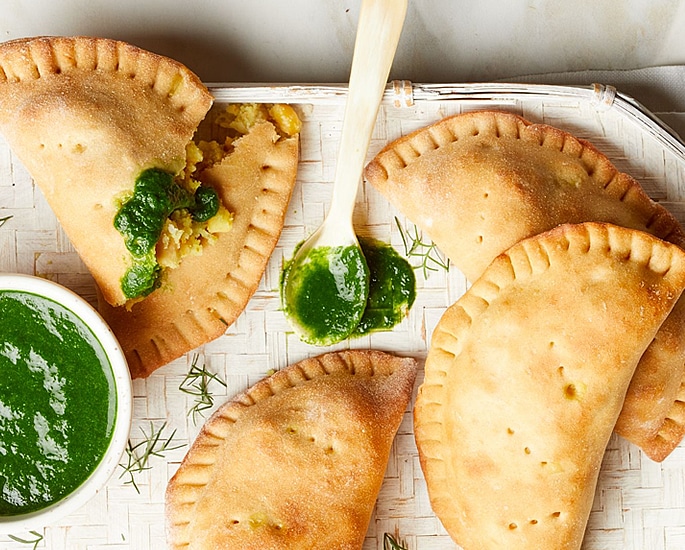 This recipe is also an Indian favourite merged into a pasty.

While the flavour is evident, it is all about the texture as the chunks of potato and peas add a unique contrast to the pastry. The potatoes are soft but still hold their shape.

When making this dish, it requires care as you want to make sure that you don’t mash the potatoes.

A mixture of meat and vegetable pasties mean that there is something for everyone.

All use a range of spices to give it a flavour that is synonymous with Indian cuisine.

While these step-by-step guides will help you make perfect pasties, feel free to adjust the quantity of spices to your taste preference.