Indian fashion has transformed  through the years, harnessing both the traditional and cosmopolitan look. As the many new trends develop in India, there is no doubt that its fashion will change with it.

In the last few years Indian Fashion is witnessing a rapid growth with each passing era. In fact, there is a shift in fashion and trends nearly every six months. This has been a prominent part of the Indian fashion industry that is rising by leaps and bounds. 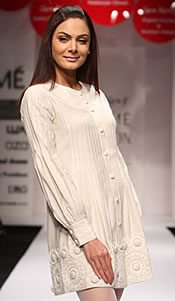 The existing gush of economic growth in India has had a major impact on the changes in fashion. The awareness and purchasing power of the middle class has resulted in a sudden boom. The influx of the IT industry has brought a rapid change in work and culture. There is a striking need for comfortable clothing during the long working hours that have led to a change in the overall demand for office wear (which includes casual clothing as well). Evolving work standards and patterns increases the scope of varied fashion in the country.

The global scenario in the economic perspective is yet another influence that has altered Indian fashion. International brands entering the Indian market and selling at economical prices is improving the growth of brand awareness in India in a big way. Specialised gym and sportswear like Reebok and Nike are expanding rapidly, having taken their racks in big malls and fashion stores. 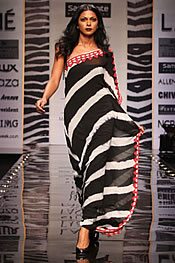 The Indian change in attire has also managed to target the clothing for ‘plus sized’ where the demand is remarkable. The market for plus sized is gaining importance and the demand is growing day by day. This could be possibly the off-shoot from changes in diet too, possibly more akin to the West in some ways such as more burger bars, pizza houses and eateries opening. The variety in the wardrobe rises swiftly from this increasing urbanisation. The country today is witnessing a rapid growth in many sectors thus bringing in the need to dress well and appear presentable.

The western influences on Indian culture has paved the way for a difference in style. Tattos, body piercing, nail art etc are in plenty. There is a constant desire for change as the Indian youth advances in the fast growing environment. However, the prominence is more on the agelessness as well. A pair of jeans can be worn and adorned by a 15 year and a 50 year old with ease and no huge reflection on suitability.

The growing influence of budding designers studying abroad to bring in a global perspective, has helped the fashion progression of the country.

From the fashion weeks becoming admired and popular in India, to Indian designer labels becoming fashion icons globally, India is fast evolving in time and speed. In the years to come, its quite evident that the Indian market will have an identity of its own principally because of globalisation – yet the core or the essence will remain the same with the likely use of materials and fabrics that still reflect India in their design in some way.

Here is photographic insight into some of the changes in Indian fashion making their way on the catwalk and beyond.

The photos show Indian fashion has transformed  through the years,  harnessing both the traditional and cosmopolitan look. And it is surely set to develop itself more with time, adopting many new trends to meet the expectations of the new India.

Yogitha is a fashion designer, writer, stylist and a choreographer who adores the world of fashion in India. Her motto: 'The fashionable woman wears clothes. The clothes don't wear her.'
Mirror Fashion
Trendy Winter Accessories