Huma Qureshi has revealed her first look as Geeta from her Hollywood debut film ‘Army of the Dead’ which releases soon.

Bollywood star Huma Qureshi is all set to make her Hollywood debut in Army of the Dead.

Huma Qureshi will feature in the movie as Geeta.

The actress has taken to social media to share her first look from the action-horror.

Alongside the poster, she captioned the post: “Another reason to stay at home.”

Huma captioned the image in regards to the current situation in India due to the Covid-19 second wave in the country.

Through her picture, she has emphasised people to stay at home.

The actress also issued a detailed statement on Covid-19.

Huma Qureshi expressed her grief and concern for the crisis that India is currently facing. She said:

“My heart bleeds as my country and my fellow Indians fight personal loss, hurt, pain and devastation every day because of the Covid-19 pandemic.

“I stand alongside them in sharing every bit of it with them.”

She further explained that despite the crisis, she is sharing her first look from the movie as she is professionally obliged to share her work with the fans.

“With a heavy heart, however, in keeping with my duties as a professional, I share my work for all of you to view.”

She ended her statement, urging people again to follow the safety precautions in these devastating times. Huma Qureshi wrote:

“Urging those who are safe to continue staying safe and follow every possible regulation in these torrid times, while dedicating my work to those who have encountered the wrath of this pandemic and wishing them health and peace.” 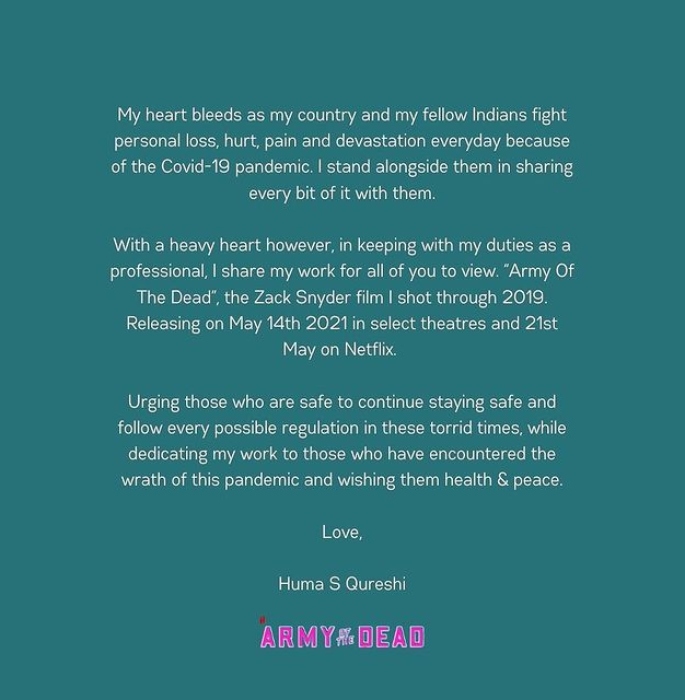 Army of the Dead

Filmmaker Zack Snyder is the director of Army of the Dead, featuring Huma Qureshi as Geeta.

The film’s plot revolves around a zombie outbreak that leaves Las Vegas in ruins and walled off from the rest of the world.

Meanwhile, a gang of mercenaries take a gamble by venturing into the zombie-infested Las Vegas for the greatest heist ever.

However, the details of Huma’s character, other than her name, are not disclosed.

The film is set to release in select theatres and on Netflix on May 21, 2021.