“It's an honour and privilege, absolutely excited and looking forward to this great journey.”

In what is a major milestone for women in sport, and indeed British Asians in sport, football agent, Shehneela Ahmed will be heading to America to help build a team for LA Galaxy’s next season.

LA Galaxy has only recently acquired the hugely talented No. 8, Steven Gerrard to lead the club to glory in Major League Soccer (MLS), and Ahmed will be looking to find the right players to support him.

Speaking about the incredible privilege, Shehneela says: “[I’m] absolutely excited to be given this great opportunity to work alongside LA Galaxy.

“It’s an honour and privilege, absolutely excited and looking forward to this great journey.”

Shehneela was specially picked as the woman for the job by LA Galaxy’s Director of Soccer Operations, David Kammarman, and will be assisting the American club in their all their footballing activities:

“I just want to thank David and his team at LA Galaxy for trusting me and giving me this unique and wonderful opportunity, I shared the news first with my team and my family before sharing it with you all,” said Shehneela.

Shehneela Ahmed has long been waving the baton of equal opportunities in football under her Sports Management Group, Platinum FA.

The British Asian from Rochdale made history by becoming Britain’s and World’s first Asian female football agent for the English FA.

And now she has done it again: “It’s a great opportunity for women in football making history globally,” Shehneela says.

“This journey full of opportunities which I have achieved is a result of the good team who I have behind me! They are my guardian angels without them and without my parents none of this would had been possible.”

Shehneela Ahmed admits that she is feeling both excited and overwhelmed by the incredible opportunity before her, and is looking forward to helping Liverpool legend, Steven Gerrard, and the LA Galaxy club go on to further greatness: 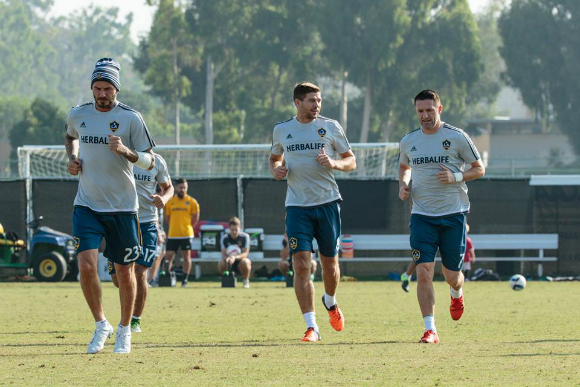 “I’ve not had time to reflect back on the last 2 years let alone digest LA Galaxy opportunity.

“It’s been one hell of a roller coaster ride and journey for me, an opportunity to be working with such a big club, I’ve been assisting scouts and managers here in England, I never imagined the MLS clubs.” she adds.

Part of America’s answer to the Premier League, MLS, LA Galaxy has enjoyed numerous footballing heavyweights in the past. Not least is football superstar David Beckham played for the club in 2007 and made it popular in the UK.

Now Gerrard, who signed to the club in January 2015, is hoping to bring the team to the level of prestige of the Premier League in the future.

And that is where Shehneela comes in. The Football Agent will be working closely with Premier League managers and other clubs in England and dealing with transfers and new signings for LA Galaxy.

Aside from all that, Shehneela Ahmed will be living out her Hollywood dream. Congratulations Shehneela!