Faryal Makhdoom says she has ‘Every Right’ to Live Off Husband

Faryal Makhdoom has said she has “every right to live off” her husband Amir Khan as the pair celebrated their ninth wedding anniversary.

Faryal Makhdoom and Amir Khan celebrated their ninth wedding anniversary, however, she also used the time to hit out at her critics.

The couple both took to Instagram to share throwback pictures and a glimpse of their activities to mark the occasion, which saw them enjoy a spa day and a lavish dinner.

But Faryal seemed to anticipate criticism over their relationship.

She took to her Instagram Story to send a strong message, stating that she lives off her husband, who is worth £30 million.

Alongside a picture of the pair, Faryal wrote:

“Fun fact – yes I live off my husband. Yessss I have every right tooo. 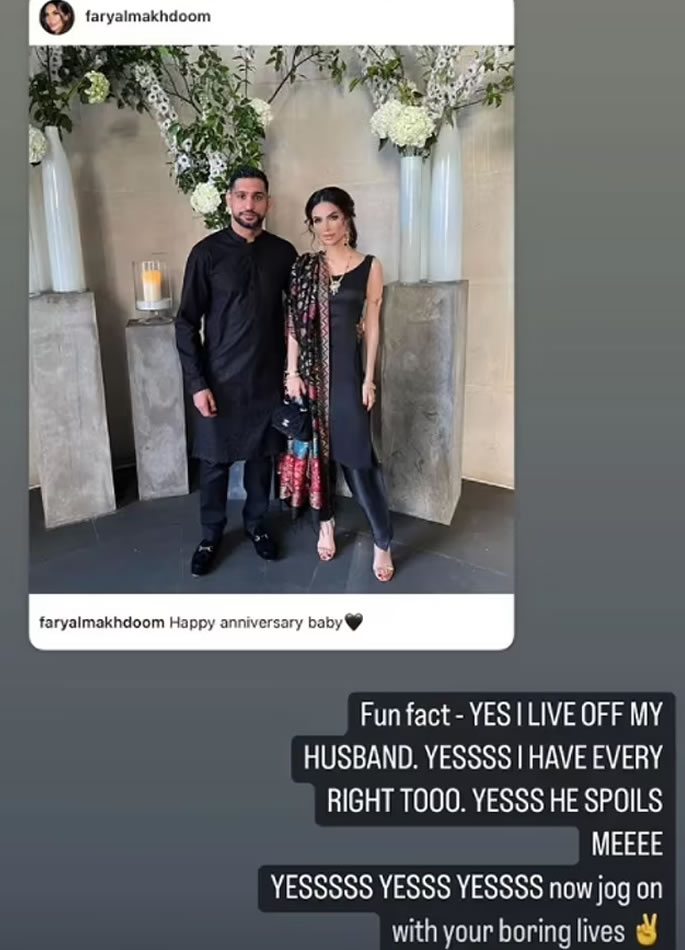 Faryal had originally shared a picture with her husband and had captioned it:

Amir also paid tribute to their anniversary with a throwback shot. He wrote:

The pair began their celebrations at the spa. Amir later shared a picture of himself tucking into a grand meal at Nusr-Et Steakhouse in London.

Amir and Faryal got married in 2013 in front of 400 people at New York’s Waldorf-Astoria Hotel in Manhattan, with the couple’s big day reportedly costing $1million.

However, Faryal Makhdoom admitted she would do things very differently. She said she would like a smaller ceremony to renew her vows on their 10th anniversary in 2023.

On Meet the Khans: Big In Bolton, Faryal said:

“I wish I could change everything about my wedding.

“I’d changed the way I dressed because I’m more in fashion now and I’m definitely more confident to be who I am and be in front of the camera all the time.”

When asked if she would renew her vows, she said:

“Maybe on my tenth anniversary [which is] in another year.”

“I think I would just do a beach wedding with a hundred people you know rather than four thousand people that you barely even know, and really enjoy it.”

But he has been floating around the idea of exhibition bouts, with the Bolton boxer calling out Floyd Mayweather for one.

“We saw the event today, I think Floyd needs a real challenge.

Dhiren is a journalism graduate with a passion for gaming, watching films and sports. He also enjoys cooking from time to time. His motto is to “Live life one day at a time.”
Man Sexually Assaulted Teen in Cab after Bribing Driver
Asians on Queen’s Birthday Honours List 2022