"I think there is something rare about this movie because [Milkha Singh] is a rare individual."

Bhaag Milkha Bhaag is Farhan Akthar’s first biographical film and is based on the life of former Indian athlete Milkha Singh. The film also stars Sonam Kapoor and Pakistani actress, Meesha Shafi. Directed by the talented Rakeysh Omprakash Mehra, Bhaag Milkha Bhaag is expected to be one of the biggest films of 2013.

This highly anticipated film, which is set for release July 12, has touched the hearts of many. The film has been described as being about the struggle and perseverance of Milkha Singh’s life.

In the film, Farhan who plays Milkha, enlists in the army as a young boy. He is guided by his coach (played by Prakash Raj) who teaches Milkha important life lessons about survival. It is during this army training that Milkha learns the necessary discipline and hard work needed to be a successful individual. It is from here that he goes on to become an Olympic athlete. 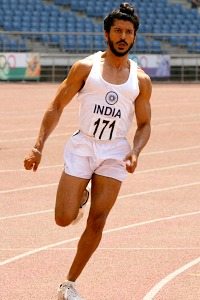 Milkha Singh has had an extraordinary athletic life, and still continues to inspire future generations. Born October 17 1935, Milkha is known as The Flying Sikh, having been a gold medallist three times and representing India in many races and bringing home awards and medals.

He was awarded the Padma Shri, India’s fourth highest civilian honour for his achievements in Sports and is married to the former captain of Indian Women’s Volleyball team, Nirmal Kaur.

Post-retirement, Milkha holds the title as Director of Sports in Punjab, and has recently penned his autobiography titled The Race of My Life with his daughter. This is to be published August 2013.

Bhaag Milkha Bhaag also marks the first Hindi film for Pakistani actress-singer Meesha Shafi. She made her debut with Mira Nair’s The Reluctant Fundamentalist (2012). She is playing the role of Perizaad, who is the best friend to Akhtar’s onscreen character of the iconic sportsman.

Meesha says: “Our cultural heritage and stories are deeply rooted that it’s natural to relate to cinema being made here. Bollywood has a huge audience in Pakistan and Pakistani music has a vast listener-ship in India.”

In the trailer, we see Farhan embodying the spirit of Milkha, through running on a train, training with the army, flirting with Sonam’s character to being slapped by a fellow soldier! In order to get the perfect physique, Farhan had to undergo rigorous training, which allowed him to feel like a real athlete. 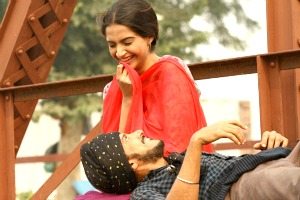 When speaking about his experience on the film and Milkha, Farhan said:

“I think it’s just important to understand the essence of him, the spirit of him and then channel it through your own imagination and draw from your own life’s experiences of when things like that resonated with you. So to make it more believable for a person who is looking in.”

He then expresses: “I think there is something rare about this movie because he is a rare individual, and it reflects in the film.”

To celebrate the film and what Bhaag Milkha Bhaag represents, fans are being given the chance to run with Farhan in a marathon, and seeing him in character. The 3km-5km marathon will be hosted in four cities: Delhi, Chandigarh, Ahmedabad and Jaipur.

A spokesperson from Viacom 18 Pictures said: “The curiosity to see Farhan running a marathon is at its highest. He has been able to transcend boundaries and has become the Milkha Singh of celluloid.”

“Ever since the promotions started, everyone has been asking Farhan about the practice that went into playing the role of Milkha Singh. That’s why the makers have decided to give the audiences a chance to watch him run a marathon and participate with him.” 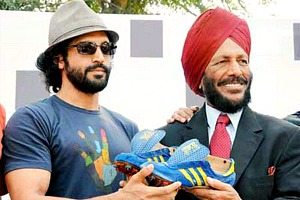 Those who have been selected will get the lucky chance to run along the talented actor: “Many school and college students will be running with Farhan. They were selected via contests held by the makers recently,” said a source.

Bhaag Milkha Bhaag also stars the stunning Sonam Kapoor, who plays Farhan’s love interest, Nirmal. Even though her role is only small and takes up 15 to 20 minutes, she plays a very pivotal part in the film. Sonam says she is very proud to be part of the film and feels honoured:

“For me the reason I did Bhaag Milkha Bhaag was because it was an outstanding script, I wanted to work with Farhan Akhtar and I wanted to again work with Rakeysh Omprakash Mehra.

“My role is a pivotal role, and it was an honour to play the part. I love Rakeysh Omprakash Mehra. For me, he is somebody who gave me a lot of confidence and helped me open up,” she added.

Bhaag Milkha Bhaag is very special for Sonam. At the trailer launch she said: 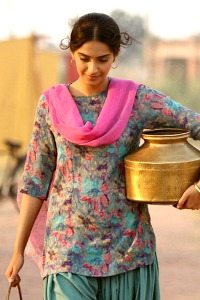 “The promo shows the blood, sweat and toil of everyone who has worked on the film. This is why I started crying. You guys have seen the trailer and you must have understood the kind of work we have done in the film.”

The music has been composed by the brilliant music directors, Shankar-Ehsaan-Loy. They have created a great mix of songs, perfect for every mood.

The first song of the album is a soulful yet short ‘Gurbani’ song sung by Daler Mehndi. The next number, ‘Zinda’, is a high energy number sung by Shankar Mahadevan’s son Siddarth. One of the more popular songs, ‘O Rangrez’ is a semi-classical love song, sung by Javed Bashir and Shreya Ghoshal and has been composed using tablas, harmoniums and harmonies with the violin.

Bhaag Milkha Bhaag is expected to do very well at the box office, and seeing Farhan and Sonam for the first time as an onscreen jodi makes fans very eager to watch the film.

The actors, producers and the whole team are hoping to inspire the young generation to get involved with sports through the film. Bhaag Milkha Bhaag is the stepping stone for those passionate about sports!

Meera grew up surrounded with desi culture, music, and Bollywood. She’s a classical dancer and mehndi artist who loves everything connected with the Indian film and television industry and the British Asian scene. Her life motto is “do what makes you happy."
Bhaag Milkha Bhaag ~ Review
Shahrukh Khan brings home baby AbRam