Esha Gupta raised temperatures on Instagram as she shared a braless selfie in front of a mirror whilst in Dubai.

"you are increasing the heat, Madam Esha Gupta."

Esha Gupta got her fans excited as she shared a braless picture on Instagram.

The actress is known for sharing bold pictures of herself and this one might be her hottest one yet.

Esha had been in Dubai shooting for a project when she posted the image in her hotel room.

In the picture, Esha is standing in front of a mirror wearing an unbuttoned oversized pink shirt, showcasing her toned abs.

She paired the look with leather shorts.

Esha posed with her hand on her hip, accentuating her figure.

As Esha posed for the sultry picture, she cheekily left several lingerie sets on the bed. Meanwhile, the Dubai skyline can be seen in the background. 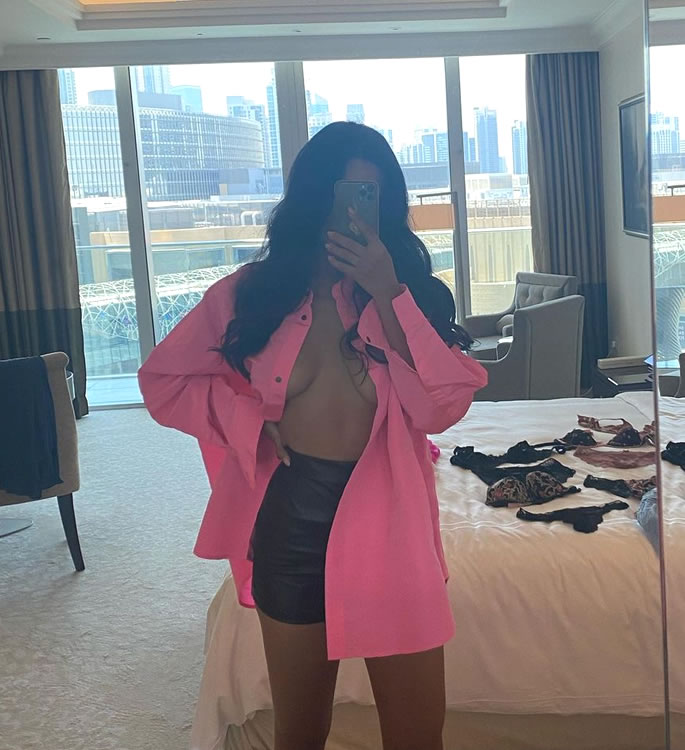 Her look was appreciated by her fans.

One person wrote: “It is already getting less hot in Dubai, which you are increasing the heat, Madam Esha Gupta.”

A third commented: “This lady is very perfect, never get bored seeing her pictures.”

Many others posted heart and fire emojis, expressing their love for Esha’s post.

Esha Gupta has 7.9 million Instagram followers and she recently completed 10 years in Bollywood.

Speaking about the achievement, Esha said:

“It’s surreal and still feels unreal. Sometimes, I still cannot believe that I’m such a lucky girl to be an actor in the Indian film industry.

“God truly works in mysterious ways, and the universe has so much in abundance for all of us.

“A girl from nowhere, making it to the big screen, and people knowing my name!”

“I cannot be more grateful and thankful for you to be who I am and for the love, I’ve earned from the audience and the industry.

“There is not a thing I would change in my life, some are achievements, and some are lessons.”

Esha Gupta made her debut in 2012 with the film Jannat 2, which starred Emraan Hashmi.

She went on to collaborate with Emraan later that year in her next film, Raaz 3D.

Their on-screen chemistry was liked by the audience.

Esha has also appeared in the likes of Rustom, Baadshaho and Commando 2.

She has two projects in the pipeline. They are Desi Magic and Hera Pheri 3.

Dhiren is a journalism graduate with a passion for gaming, watching films and sports. He also enjoys cooking from time to time. His motto is to “Live life one day at a time.”
Are Ranveer & Deepika expecting their First Child?
Saba Ali Khan reacts to Trolls criticising nephew Taimur