"I don't believe in good guys"

Deepika Padukone, in a sun-kissed and feisty avatar. With her fine figure, dark eyes and beautifully curled hair, the character Serena Unger is deadly and incredibly desirable.

D J Caruso is no stranger to directing action films. Remember, I Am Number Four and Eagle Eye?

His direction in Return of Xander Cage is average. Whilst there is a good flow, the film’s screenplay could have been tighter. But Russell Carpenter’s cinematography turns out to be decent.

The film centres on action and high-octane stunts, many of which we’ve seen in several other movies before. Especially, with sequences like the motorbikes turning into jet skis, it’s quite reminiscent of even Bollywood films like Dhoom 2.

Nevertheless, one action scene where the main protagonists and antagonists are combatting each other on an upside down plane is quite innovative and engaging. Plus, the upbeat score by Brian Tyler enhances the pulsating atmosphere during the action sequences. 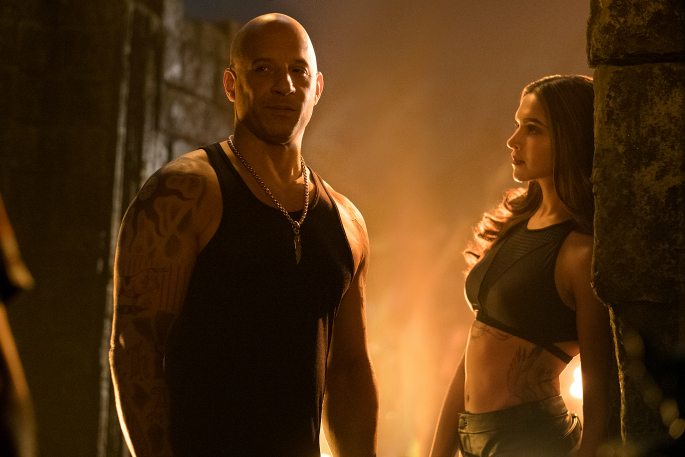 While the action is satisfactory, the storyline is quite ordinary. F. Scott Frazier and Chad St. John attempt to pen a story which promises to be a novel and edgy action-thriller, sadly it falls prey to the “been there, done that” formula.

The appealing factor in Return Of Xander Cage is its exotic locations in various countries. Whether it’s a beach or an island, these are perfectly suitable for the style of the film.

Fortunately, the performances of the main cast are up to the mark.

Vin Diesel returns to the action-packed series after the first instalment. There is a smooth continuation of his character. Xander Cage is the same thrill-seeking guy as he was in the 2002 hit. Vin’s comic timing, style and screen presence are thoroughly entertaining.

Deepika Padukone is perfect for the role of Serena Unger. Her eyes pierce your heart and her smile will leave you smitten. Her chemistry with Vin Diesel is quite exquisite.

A scene where the two first look into each other’s eyes, holding weapons against each other, Vin mentions: “I’m not a bad guy.” Deepika sharply responds: “I don’t believe in good guys.” Murder is clearly on her mind.

As we’ve seen action-packed avatars of Deepika in movies like Race 2 and Chandni Chowk To China, she is graceful and at ease whilst portraying this role. Furthermore, it’s nice to also see that Deepika has not changed her accent to suit the American role. 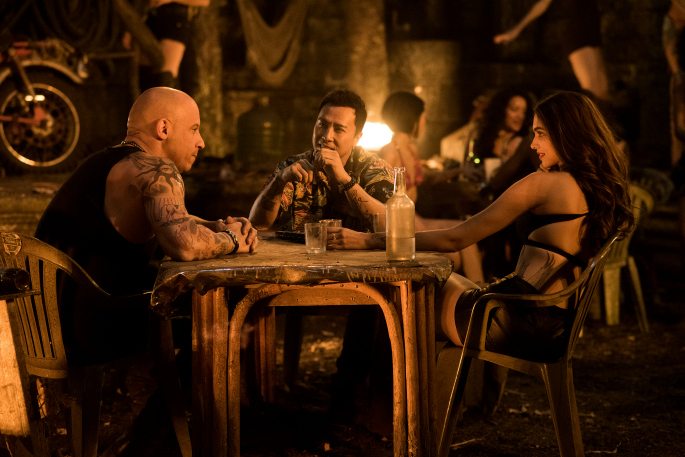 However, the two leading protagonists are incomplete without their trusted team of ‘the good, the extreme and the completely insane’. Ruby Rose as Adele Wolff, the sharp-shooter, is good. Her sarcastic sense of humour in this film strongly resembles her character in Orange Is The New Black. Rose is truly kick-ass.

Kris Wu as Harvard ‘Nicks’ and Rory McCann as Tennyson alias ‘The Torch’ exhibit quirky traits which work well. The most impressive during the comedy portions is Nina Dobrev. She plays Agent Becky Clearage, who is in awe of Xander Cage. Nina’s comic-timing is natural.

Donnie Yen is considered to be one of Hong Kong’s top action stars. He was impressive in Star Wars: Rogue One and delivers another fine performance. He proves it again with his suave and subtle demeanour. Toni Collette as the sturdy Jane Marke is also fab.

Samuel L Jackson steps in (once again) as Augustus Eugene Gibbons. Compared to the other Triple X films, he hardly has anything to do in this one. It’s a real shame we couldn’t see more of the talented actor!