Dangerous driver Adeel Khalid has been jailed after he drove at speed on the A34 before crashing into a nursing student’s car.

"The front of his vehicle went into the side of her car."

Dangerous driver Adeel Khalid, aged 21, of Rochdale, was jailed for two years after he crashed into a nursing student’s car.

The collision on the A34 in Newcastle left the young woman with life-changing injuries.

Khalid was driving 31mph over the speed limit half a second before his Vauxhall Astra hit the side of the victim’s Vauxhall Corsa at approximately 4 am on March 4, 2018.

Prosecutor Laura Culley explained that the third-year nursing student at Keele University dropped off some friends at 4 am on March 4, 2018.

She was driving back to her student accommodation when the collision occurred.

Miss Culley said: “She approached the junction of Victoria Street and the A34 London Road. The road has a 40mph speed limit.

“The defendant’s Vauxhall Astra was in lane two going north and collided with her. The front of his vehicle went into the side of her car.

“The defendant was taking three of his friends to McDonald’s. He had something to drink earlier that evening. A back calculation showed he was around the alcohol limit at the time.”

Accident investigators discovered Khalid was travelling at 71mph half a second before the crash and his speed at the point of impact was 57mph. 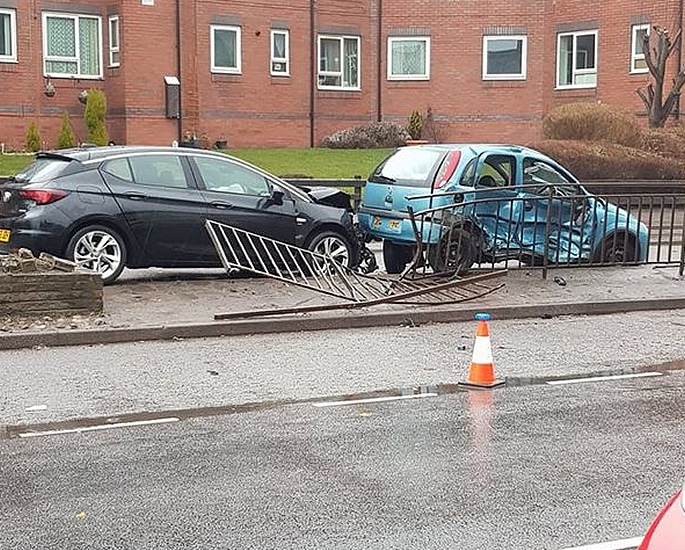 The young woman suffered serious injuries including multiple contusions to her brain, a fractured skull, multiple rib fractures and a pelvic fracture.

The victim now suffers from short-term memory loss and has no memory of the accident. Stoke-on-Trent Crown Court heard she is still undergoing speech and language therapy.

The student had secured a nursing job at the Royal Stoke University Hospital but has been unable to take up the position.

Khalid, who was set to graduate with a First Class degree in Psychology, pleaded guilty to causing serious injury by dangerous driving.

Tom Gent, mitigating, said Khalid is sorry for his actions.

He said: “It was a terrible mistake. There is not a day or night that he does not think about what happened and the effect it has had on the victim and her family. It will haunt him forever.

“He accepts that he should not have driven that night. He accepts he was driving far too quickly and it was dangerous to do so.

“It is clear he did react to her car entering the carriageway but because of the excess speed he could not avoid the collision.”

Mr Gent said that Khalid has stopped driving and has sold his car.

“No doubt she felt she had ample time to carry out the manoeuvre. What she could not have legislated for is the fact you were travelling so much in excess of the speed limit and you had been drinking alcohol.

“Your ability to drive safely would have been impaired. Your vehicle smashed into the side of the Corsa.

“The effect on the victim was devastating. She received life-changing injuries.”

“Your speed was ridiculously high for the speed limit and the road conditions.”

Adeel Khalid was jailed for two years. Judge Glenn also banned the dangerous driver from driving for three years and until he passes an extended test.

The Stoke Sentinel reported that the ban comes into effect once he has been released from prison.

Dhiren is a journalism graduate with a passion for gaming, watching films and sports. He also enjoys cooking from time to time. His motto is to “Live life one day at a time.”
Pakistani Man aged 60 arrested for Trying to Marry Girl aged 12
English Test Scammers jailed for Systemic Cheating