The inaugural Asian Woman Festival made history at the New Bingley Hall in Birmingham, recognising Asian female talent from across the UK.

“Being an Asian woman means being outspoken"

AWF made history as over 800 people came to celebrate the inaugural event at New Bingley Hall, Birmingham.

Guests came from as far as Germany to revel in several intellectual discussions to “smash stereotypes” and “empower Asian women.”

Shay Grewal from BBC WM was the festival host. A grand line up of guest speakers and panellists from across the nation voiced their opinions during various discussions. 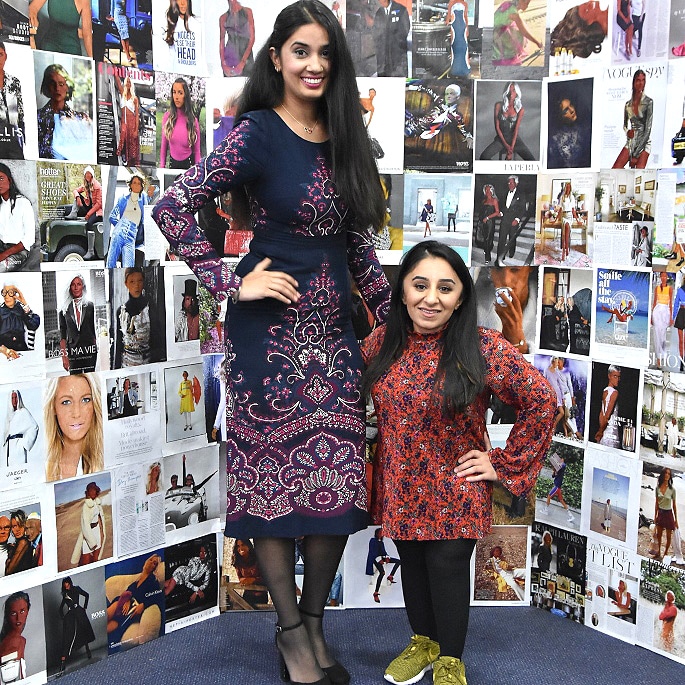 Earlier highlighting the importance of confronting stigmatised issues amid a restrictive culture, she stated:

“There are still massive taboo issues in our community and the Asian Woman Festival will be a safe space to tackle these subjects, giving attendees the skills to confidently navigate their way through society whilst celebrating the ever-vibrant culture and traditions of being Asian.”

DESIblitz highlights the event, including the performances, discussions and festival bazaar. 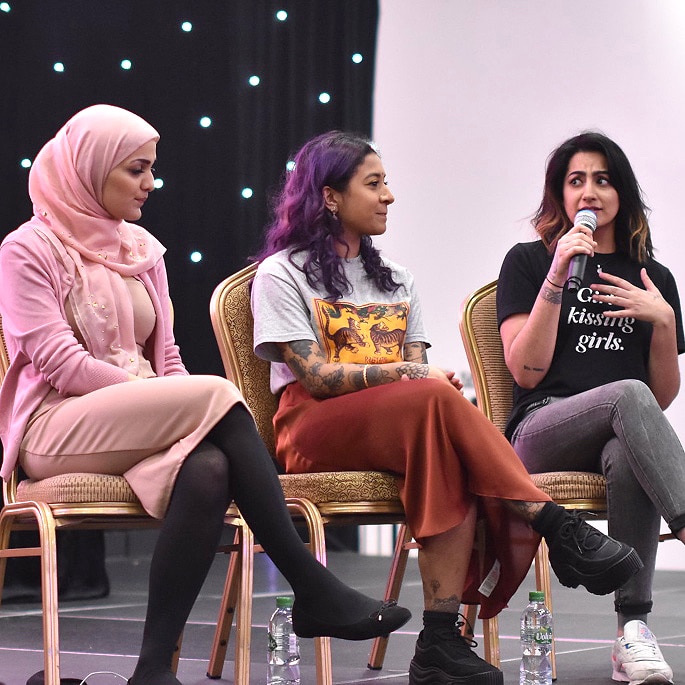 The historic event opened with an intimate performance by singer-songwriter and Sarangi player, Amrit Kaur. She has previously dazzled audiences, whilst touring USA, Canada, Europe and Asia.

Amrit focused on what she does best – eloquently fusing Punjabi music with Western soul beats.

The British born musician stunned the crowd with her immense talent. This was the best way to kick off the day.

The burning question, “What does it mean to be an Asian woman?” was presented to the panellists –  Sharan Dhaliwal, editor of Burnt Roti magazine, tattoo artist, Heleena Mistry and stand-up comedian and writer, Sadia Azmat.

The trio examined their identities as Asian women, all reflecting on their unique lifestyles in doing so. Sharan said:

“I think it’s quite a nuanced answer.”

She then astutely pointed out:

“Being an Asian woman means being outspoken, being queer, being Punjabi, being so many things.

“It needs to be dissected. That term kind of isolates that group of people, within class, within sexuality, within everything.

“That term in itself doesn’t mean much to a group of people, it means something different to everybody.”

“There are so many different ways to be Asian. We come together because we share experiences.

“When I was younger I hated being Asian…now all of a sudden everyone’s getting fake tans and bindis. It’s ‘cool’ to be Asian now.”

She was then asked on whether others are able to see past Sadia’s ethnicity and her choice to cover her hair. She facetiously remarked: 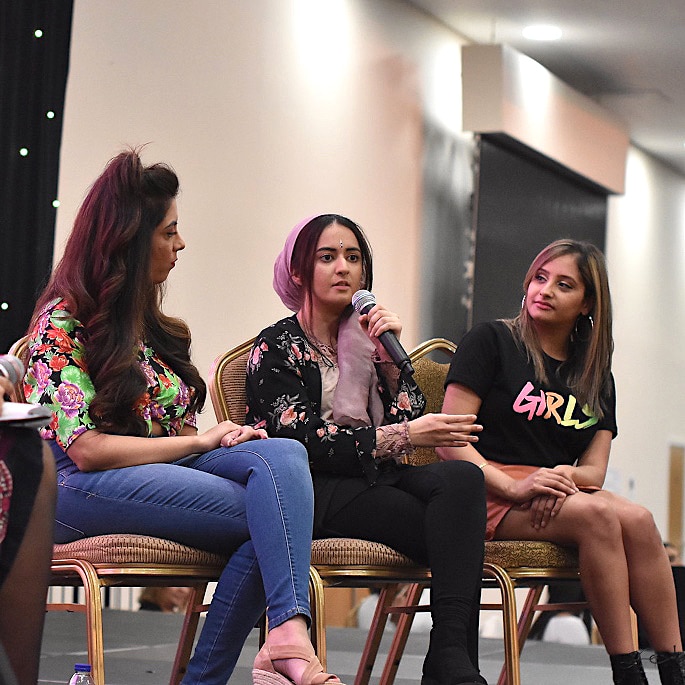 Compelling issues were revisited throughout the day, with the Chai & Chat discussion focusing on the Asian stigma with disability.

Another gripping speech was given on the main stage by poet and teacher, Jaspreet Kaur. She granted us access to the Asian diaspora struggle through her award-winning spoken word poetry.

Dressed entirely in opulent Indian attire, Jaspreet graced the stage with her presence, moving the audience with her powerful piece, That’s not my name.

She also motivated guests with her mantra: “I am strong. I am powerful. I am worthy.”

Panel topics became weightier as the day progressed, with Taboo No More on the main stage in the afternoon.

DESIblitz was part of this discussion, along with BBC Asian Network presenter, Noreen Khan and award-winning blogger, Taran Bassi.

The panel dived into the taboos affecting the Asian community and in particular, why they exist.

All topics were brought to the table, from sex to mental health, as well as insightful questions from the audience.

“How do you face backlash from the community?” asked one curious audience member.

The panel expert from DESIblitz responded:

“I often tell myself if I don’t confront this, who will?”

Possibly one of the most popular panels of the day came after Taboo No More.

The speakers waded into the delicate theme of colourism and the desire to be fair – and its close connection with anti-blackness and racism within the Asian community.

The three women offered a fresh and candid view on sex in Asian communities – with each sharing their personal experiences and also highlighting the dangers of online pornography.

In the midst of such heavy issues, the trio entertained the crowd with their hilarious sexual escapades and their parents’ and community’s views of them being sexually active.

Also on the line-up was nutrition coach Jaspreet Kaur, also known as The Hipster Veggie. She conducted her workshop on female wellness, managing common health concerns amongst women.

Being Brown was another workshop that won over the attendees. 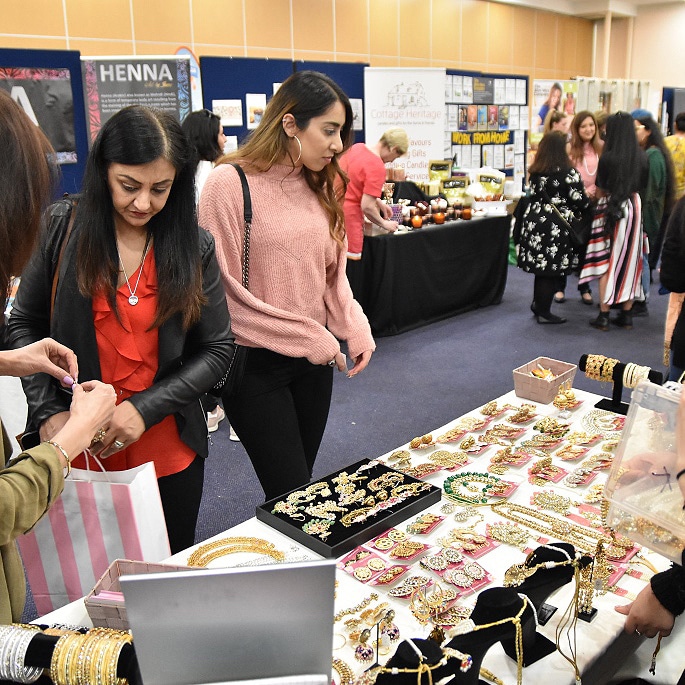 Over thirty homegrown businesses joined the festival bazaar, proving a hit with attendees.

Comedian and Podcast presenter, Sadia Azmat, graced the stage with her stand-up comedy. She had audiences roaring with laughter with her relatable and witty humour.

Though some attendees had reservations with the overall execution of the event, the inaugural AWF indeed made history on March 30, 2019.

Hence, with AWF 2019 paving the way for empowerment, we look forward to many more events for Asian women in the near future.