Art and Anarchy at Banksy’s Dismaland

Marketed as one of the ‘UK’s most disappointing’ visitor attractions, Dismaland Bemusement Park has been a roaring success. DESIblitz visits Banksy’s sinister theme park to find out more.

Banksy clearly knows us all too well - we Brits really do love wallowing in misery.

Welcome to the UK’s biggest and ‘most disappointing’ attraction of 2015: Dismaland Bemusement Park.

For 5 weeks, a grey and unsurprisingly bleak beachfront situated in Weston-Super-Mare has been home to one of the most popular amusement parks dedicated to black comedy.

Boasting a ‘not-so-fun family’ day out, Dismaland offers visitors an experience that they are unlikely to forget.

Not least because having fun of any kind is strictly prohibited. As you enter the Disney-inspired enclosure, your first instruction is to stop smiling and refrain from being happy in any way.

The staff in black hoodies with ironic pink ‘Dismal’ inscribed jackets and Mickey Mouse ears are unsurprisingly gloomy and notably miffed to be there. Opting to be as unwelcoming as possible, it’s a stark contrast to Walt Disney’s, ‘Smile or You’re Fired’ mantra. 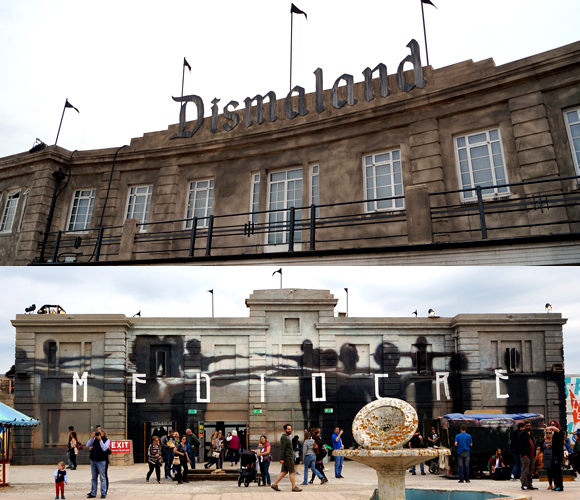 After passing through actual security, you find yourself up against ‘ironic’ security created entirely out of cardboard that hollowly mocks you as you are ushered through.

It’s only once you find yourself inside the fortified compound that you can see the park in all its glory. A burnt Cinderella castle sits in a ruined state complete with a drawbridge that fails to hide piles of trash and garbage on either side.

Inside you’ll find an unsettling reference to Princess Diana’s death. Cinderella’s overturned pumpkin carriage has the Disney princess hanging over the door, supposedly dead, while a dozen paparazzi incessantly capture every image they can.

In front of the castle is a statue of our favourite Disney mermaid, Ariel, who Banksy has contorted so much that it looks like she is in the process of being downloaded from the Internet. 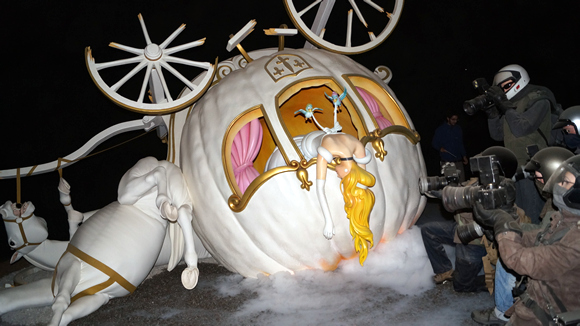 Next to the castle is ‘Water Cannon Creek’, which sees a half-sunk armoured police riot van complete with sniper posts and grenade launchers, as well as a bright green children’s water slide.

On one side of the park, you’ll witness a brightly painted fairground carousel. A flashback to childhood days for most of us, but on closer inspection we see a man with a white mask sitting casually next to cardboard boxes labelled ‘Lasagne’.

Look above them and you’ll tragically see a horse suspended from the roof as though in a butcher’s market – a visually brutal recreation of the horse meat scandal that plagued media headlines for months.

Despite being relatively small to navigate, you will constantly find yourself stumbling over a new satirical take on ordinary life, you can sign up to the Comrades Advice Bureau or enjoy a ride on the ferris wheel.

The park enjoys dark comedic tendencies that border on anarchy, and what you witness is a first-hand commentary on the future dystopia that awaits us. 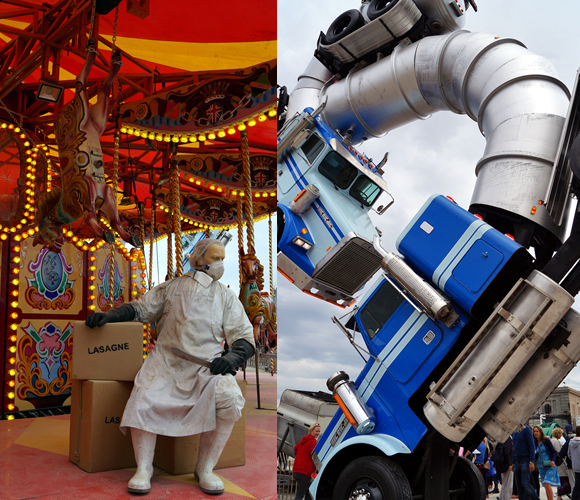 In an interview for the Dismaland website, Banksy explains his intentions behind the bemusement park:

“It’s an experiment in offering something less resolved than the average theme park. We built a family attraction that acknowledges inequality and impending catastrophe.”

Clearly, this is one of Banksy’s strengths. To take something that is so undeniably familiar and transform it into something shockingly real, relevant and doomed.

Much of what you will see at Dismaland will hit close to home, and everything familiar has been battered, deep-fried and dipped in a heavy sauce of ruthless cynicism.

‘Fly Tip Theatre’ by Paul Insect and Bast is a puppet revue show that has been reconstructed atop the contents of Hackney skips. On chains hooded puppets dance under CCTV supervision, with a board that reads: “Move poles up and down … make us dance.”

This eerie sense of ‘Big Brother is watching’ follows you around the park, aided by intermittent announcements that are a hilarious mockery of inspirational quotes heard through loudspeakers across the park.

In one exhibit, you can find an entire miniature city recreated as a police state. Fast Food outlets are trashed and lit alight, signalling a dystopia that seems eerily too close for comfort. 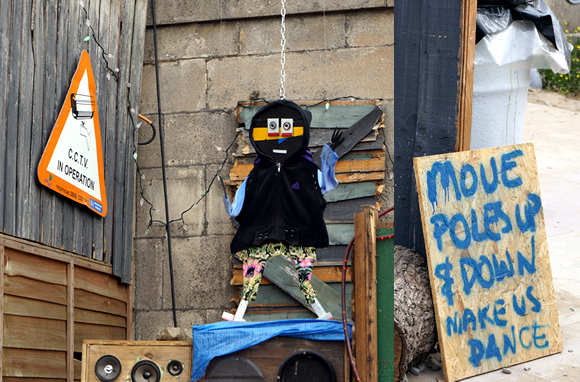 Outside, there is a ‘Pocket Money Loans’ shop that offers loans only to children. Offering a free teddy bear after defaulting for three months, you can also borrow £5 if you agree to pay back £50.

Inside the galleries, you will see the Grim Reaper having the time of his life on a Dodgems car, and a newborn baby in a vending machine that has been stamped with global consumer brands like Coca Cola, Sony and Adidas.

One of the running themes at the bemusement park is ‘inequality’. In one corner you’ll find an exhibit that sees tiny remote-controlled boats circulating a lighthouse. The boats are crammed with refugees eagerly trying to get towards the White Cliffs of Dover. 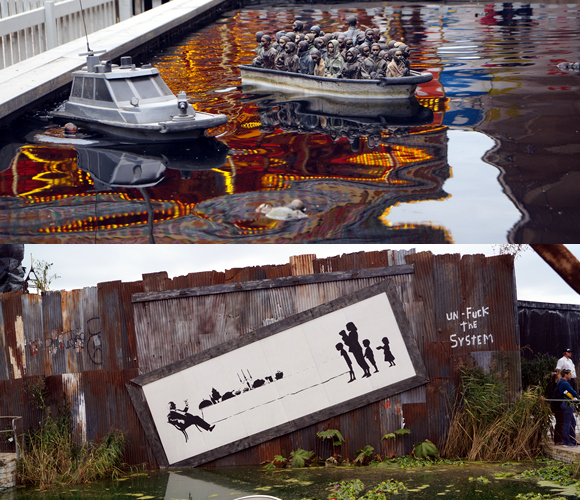 Commenting on poverty and greed, Banksy explains: “In the remote control boat pond it randomly switches the boat you operate – so you have no control over whether your destiny is to be an asylum seeker or a western superpower.”

In Dismaland, you’re inclined to feel that Banksy wants you to be miserable, to suck out your life’s optimism and instead serve you doomed chaos on a grey and wonky platter.

For many of the 60 artists featured in Dismaland, reality is essentially chaos packaged in a ‘family day out’.

But it’s actually had the opposite effect. With the public eagerly queueing each day for a glimpse of the park, as well as online tickets selling at a record rate, Banksy and the artists responsible for this sinister theme park have welcomed a huge success.

Banksy clearly knows us all too well – we Brits really do love wallowing in misery.

Now the artist has decided to send all the timber and fixtures to Calais, to build shelters at the ‘jungle’ refugee camp.

Another 2,000 items from the park will also be auctioned on eBay.

The publicity-shy Banksy is best known for his cutting commentaries on social and current affairs. Is his Dismaland the attraction of the year? We think it might just be.

Check out our gallery of images from Dismaland below:

Aisha an English literature graduate, is a keen editorial writer. She adores reading, theatre, and anything arts related. She is a creative soul and is always reinventing herself. Her motto is: “Life is too short, so eat dessert first!”
Jaipur Literature Festival enjoys success in USA
Rudi Dharmalingam uncovers Theatre and Hamlet