It is reported that Sania Mirza and Shoaib Malik are set to split up soon and several cryptic posts suggest that is the case.

According to reports, Sania Mirza and Shoaib Malik are on the verge of splitting up after 12 years of marriage.

However, reports have said that things are not going well between the couple and they are set to end their marriage soon.

It is speculated that they are living apart and are co-parenting Izhaan.

While the reason is unknown, several media reports have claimed that Shoaib cheated on the tennis star on one of his TV shows.

However, neither Sania nor Shoaib have responded to the claims.

But recent social media posts have fuelled speculation that they have indeed split up.

Sania shared a picture with her son and wrote:

Despite being active on Instagram, Sania Mirza also did not share any pictures from her son’s birthday party in Dubai.

On the other hand, Shoaib did.

The superhero-themed party looked to have been a grand affair, with former boxer Amir Khan among the guests.

Some pictures also featured Shoaib and Sania with their son as he blew out the candles on his cake. 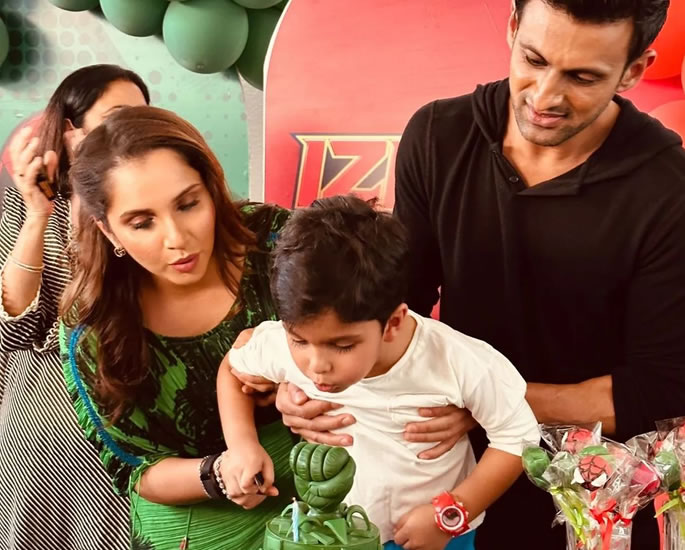 While it appeared as though things are fine, the caption suggests otherwise.

Implying that they are living separately and that Izhaan is living with his mother, Shoaib wrote:

“When you were born, we became more humble and life meant something special to us.

“We may be not together and meeting everyday but Baba is always thinking about you and your smile every single second.”

“May Allah give you everything you ask for Izhaan Mirza Malik. Baba and Mama love you.”

This led to social media users giving their opinion on the alleged matter.

One person said: “If it is true, how long they will stay in fake relationship?

“One day it will be over now that’s time to show fact.

Another said: “He Shoaib Malik betrayed his first wife and got married without divorcing her..how can he live a comfortable life.”

In the Pakistani cricket show Ask The Pavilion, Shoaib was asked about Sania’s tennis academies and where they are.

“I don’t really have proper information about the locations. I have never been to any of those academies.”

Waqar asked: “What sort of husband are you?”

Dhiren is a journalism graduate with a passion for gaming, watching films and sports. He also enjoys cooking from time to time. His motto is to “Live life one day at a time.”
Danushka Gunathilaka arrested for Sexual Assault
Dubai Investors Submit £4.3 Billion Bid for Liverpool FC