Amir Khan and Faryal Makhdoom appeared on ‘Shopping with Keith Lemon’ where they spoke about their terrifying gunpoint robbery.

"We hate shopping together."

Amir Khan spoke about the terrifying moment he was robbed of his watch at gunpoint on Shopping with Keith Lemon.

The ITV2 show sees Keith Lemon interviewing celebrities, asking them questions no one else dares to ask while shopping.

Amir Khan and Faryal Makhdoom were part of the sixth episode of series three.

The trio went to a garden store and looked at gigantic blooms of flowers before heading off to a party centre.

On the episode, they visited Springtime Nurseries garden centre in Enfield, London.

Keith Lemon admits he is excited to meet the former boxer and upon their arrival, Amir says:

“I need some house stuff, I want to get a nice barbeque.”

Speaking about shopping trips, Amir claims that he and Faryal tend to go together, however, Faryal is not sure that is the truth as she asks: “Do we? I don’t know about that.”

She then admits: “We hate shopping together.”

Amir ends up agreeing: “I don’t like shopping with Faryal because she always stops everywhere and wants to look at everything.”

On what he buys the most, Amir explains that it is mostly training equipment before revealing that sometimes he goes “chandelier shopping”.

With a confused look on his face, Keith replies:

Turning to Faryal, Keith asks: “What’s he [Amir] like to live with?”

Amir protests, stating he is easy to live with but Faryal is having none of it. She then states:

“He’s never home actually so I never see him.”

On his annoying habits, Faryal bluntly says “everything”, causing the comedian to burst out laughing.

Amir asks his wife to give him examples, to which Faryal says:

“He asks the same question over and over again.”

Amir justifies this by saying he “gets punched in the head for a living”.

The couple spoke about how they met.

As they make their way around the garden store, they look at garden ornaments. They then come across trees, including a mini one that costs £179.

Amir smirks and says that it is too expensive. Faryal interrupts him and says:

Amir tells her: “Stop showing off.”

When discussing his training camps, Keith Lemon asks if he does not have sex during them and Amir says he doesn’t.

Keith asks why and Amir replies: “It keeps all the energy in. You can’t be releasing all the goodness.” 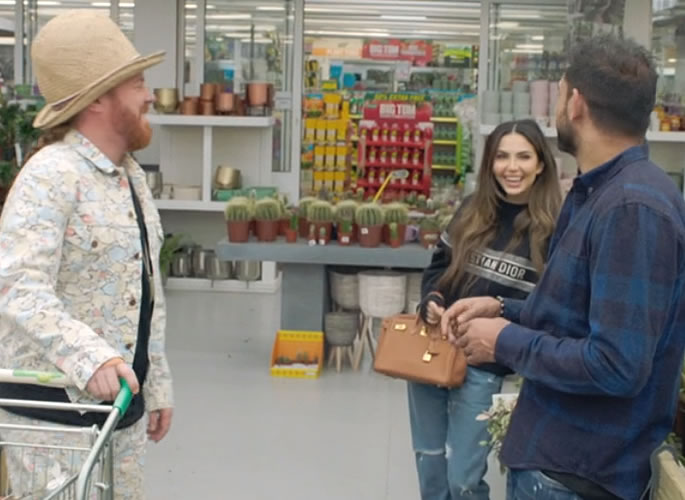 While Keith and Amir laugh at the comment, Faryal has an embarrassed look on her face.

When selecting the barbeque, Amir bizarrely thinks that he has to take it to the till and attempts to lift it.

In the party centre, Amir spoke about being robbed of his watch.

The episode was filmed the day after the gunpoint robbery. Amir begins:

Amir and Faryal had gone out for dinner in Leyton, East London. After leaving the restaurant, they were approached by two men.

“I am literally walking to the car, putting my hand towards it and a guy comes and pushes me.”

Making a gun signal with his hand, Amir continues:

“I remember him putting a gun to my head and saying to me, ‘Take off your watch’.”

Amir initially thought it was someone playing a prank but it became serious when the thug said:

“Give me your watch or I’m gonna shoot you.”

The ex-boxer added: “I literally saw through the barrel.”

Faryal said: “I was a few steps behind.

“I remember going in the middle of the road and screaming for help and going. There’s a gun, there’s a gun’.”

Faryal then confesses: “Last night I couldn’t stop thinking: ‘Imagine if they just shot you’ and you think about your kids, that’s the first thing that goes into your head.”

The episode ends with Amir and Keith at the barber where they are left screaming in pain after having their nose hair waxed.

Dhiren is a journalism graduate with a passion for gaming, watching films and sports. He also enjoys cooking from time to time. His motto is to “Live life one day at a time.”
Did Sara Ali Khan leave Hotel with Shubman Gill?
Karan Johar’s Children troll him over his Singing