An AI-enhanced and colourised YouTube video presented how London was in the 1920s, however, it has attracted racial hate.

London in the 21st century is a completely different place to live compared to the 1920s.

Countries like India and the West Indies that were victims of colonial rule were called upon to help rebuild the city and the rest of the country destroyed by the war.

Where once the men thought they would earn money and go back to their native lands, the migration continued.

As a result, the families of these men were then allowed to join them.

A 1920s portrayal of London in a YouTube video on the channel, Rick88888888, shows a very different picture of London’s landscape.

The video shows its population as predominantly white with a mixture of classes. From the rich to the working class with life taking a very simple form.

One key observation is that there are hardly any immigrants to be seen on the streets of London in the video, hence, showing a very dominant picture of white indigenous British people.

It’s this difference that has sparked racial slurs and hate in the comments section of the video.

The comments in between some of the normal reactions to the video are maligned with how London has gone downhill or how it’s become a cesspit since immigrants were allowed into the city and country.

There are some comebacks to the racial comments, where someone says, immigrants are getting their ‘own back’ after the British had invaded their lands.

Most likely, referring to India, Africa and the West Indies.

Here are some of the comments made by those who are racially inclined in what they had to say.

One person said: “Sorry to say this but London isn’t English anymore.”

Another comment read: “Prior to London turning into a curried fart in a bottle.”

This prompted one user to agree:

“However, my point still stands, invade countries and pay the consequences. Persians, Romans, Greeks all did. It’s UK’s turn.”

A third said: “Didn’t see one person with a rag on their head… Look at it today… nuff said.” 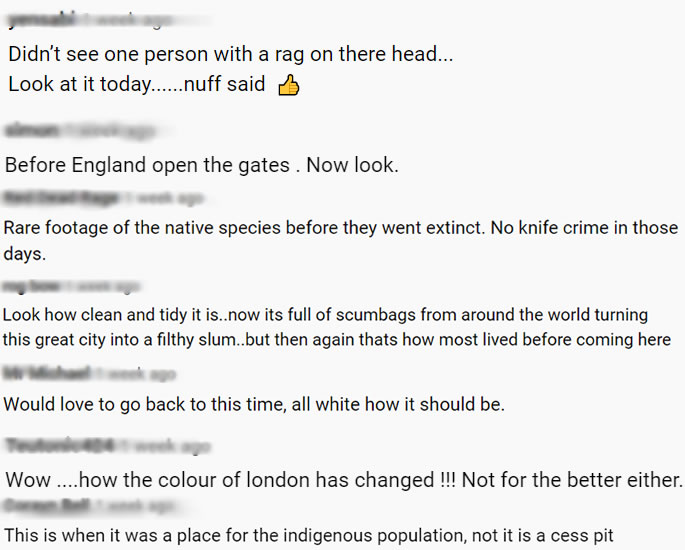 The comments show that even today, there are many living in the UK and cities like London, who cannot and will not accept that people from different cultures can co-exist in a country like England.

There is a blame game that never seems to end when it comes to showing change or progress even in a capital city like London.

London has always been a magnet for immigrants, especially for visits related to trade and business.

In addition, for the desire to work and live in one of the most loved capital cities of the world. Where the migrants participate in workforces and the economical needs of the country.

These keyboard critics tend to forget that immigration has always been the policy of governments that have ruled the country. And those coming into the country are being allowed to come.

They are not ‘invading’ the country compared to the way the British decided to impose colonial rule on countries like India in order to ‘break its back’.

Of course, there is the issue of illegal immigration that is something that most western countries have been dealing with for decades.

But that is a minority versus a majority, legally living in Britain.

Racism can come in different forms.

From monkey chants in football terraces to attempts to cover it up as ‘banter’ in cricket, the fundamental reason for its presence is what needs to be questioned.

Evidently, from these video comments and so many others like these that you see below stories on websites like the Daily Mail, that there is not a shortage of people with this mentality.

It seems, there is also no doubt that there are still many people in Great Britain, who will feel that those of a different skin colour or culture are never to be accepted as ‘British’.

London today is a colourful and vibrant city representing many different types of people who actually are ‘British’ and have a right to equally live in the city.

The mix of cultures and diversity in London makes it a very exciting and interesting place to visit and live in.

But there are many people as we can see from the video comments who still want to live in the past and cannot seem to accept that London is not ‘as white’ anymore.

Watch the Video of 1920s London 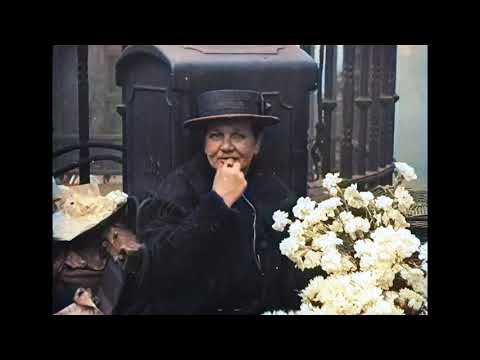 Dhiren is a journalism graduate with a passion for gaming, watching films and sports. He also enjoys cooking from time to time. His motto is to “Live life one day at a time.”
Man jailed for Stealing Car at Gunpoint during Test Drive
How ‘Drink Spiking’ is Impacting British Asian Women