10 Famous Bangladeshi Painters and their Paintings

Bangladesh is a nation, which is enriched with arts and crafts. DESIblitz takes a look at 10 famous Bangladeshi painters originating from the country.

"paintings must express its beauty and fragrance in its own way"

Bangladeshi painters and their artistic work are widely popular throughout the globe.

Bangladesh is famous for beautiful landscapes, exotic foods and home to the longest sea beach in the world, Cox Bazar.

With over 164 million people in Bangladesh, some outstanding painters have emerged and made a footing in the art world.

Many people may not be familiar with the significant and outstanding art movement that links to Bangladesh.

The captivating paintings of Bangladesh have noticeable styles such as folk art to more modernistic approaches. 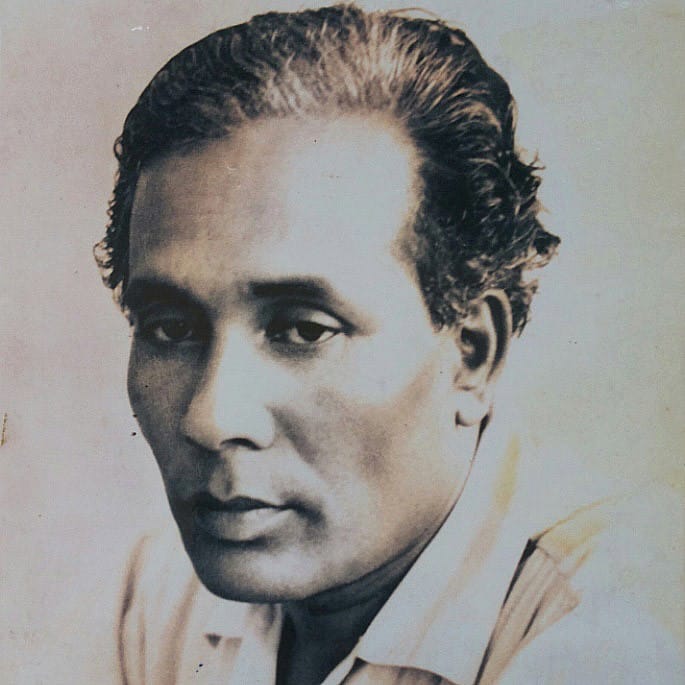 Born in Kishoreganj, the artist took inspiration from the Brahmaputra River, incorporating this into his work.

This soon landed Abedin an award for the ‘Governor’s Gold Medal’ in an all-India exhibition in 1938.

People in his home country recognise Zainul as the founder of Bangladeshi modern art.

After graduating, the artist established the Dhaka Art School in 1948 with the help of a few colleagues.

His untitled painting, Santhal Women (1969) is both aesthetically and visually pleasing.

The strong depiction of these women and the beautiful brushstrokes gives this work a village feel.

It is as if he almost transported his work to another time and place.

Zainul’s ability to capture real life aspects is what gets his paintings and sketches recognised all over the world.

Beauty Regime (1953) is another major work by Abedin. 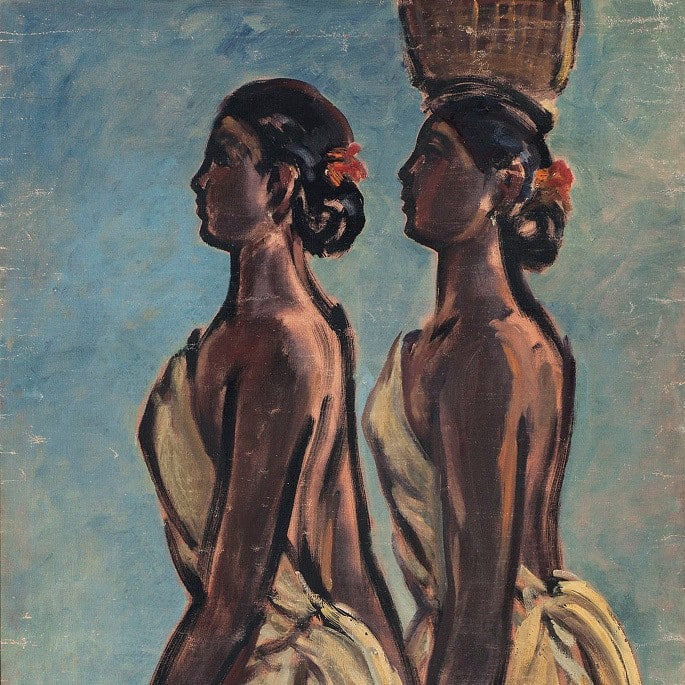 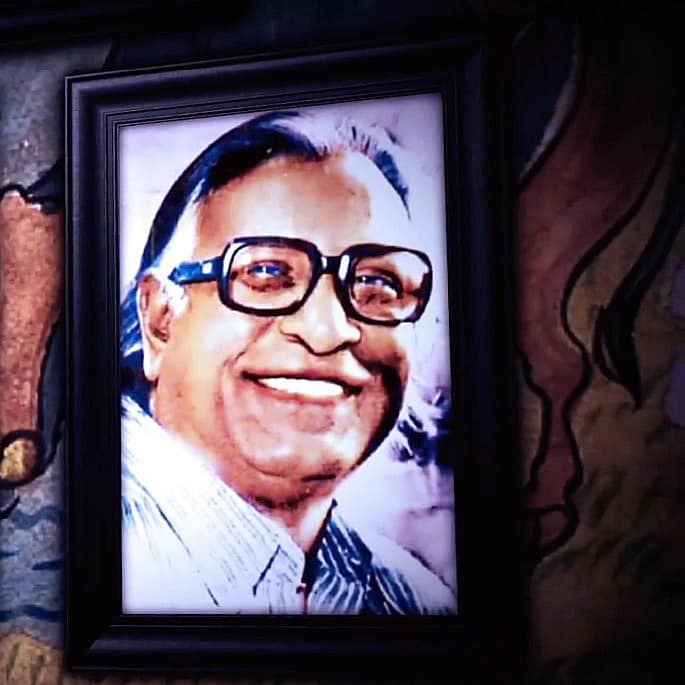 This title was given to him because of his style of painting, which takes a down to earth approach.

Hassan was originally born in Calcutta, India, but had moved to Dhaka and founded the Institute of Fine Arts.

His father was superintendent of a graveyard and did not support the life of art.

But going against his father’s wishes, he attended Calcutta University under the warning that he was to pay for it.

Like Zainul Abedin, Quamrul had also developed his own figurative signature style by taking elements of folk and traditional art.

The artist was also a sketcher and woodcutter.

An untitled painting of his from 1971 depicts a woman surrounded by a captivating blue and green boarder.

Other famous works by Quamrul include Peacock and Parrot (1976).

This captures the sort of style that Hassan had worked within his paintings.

The artist worked in a very geometric approach using shapes and strong lines to create figures and objects.

His style of work is closely comparable to Abedin. This is quite ironic because both were the founders of the Institute of Fine Arts.

But collating his sketches and other mediums, it is evident that Quamrul has a more refining and simple stylisation.

He won numerous accolades including ‘President’s Gold Medal’ in 1965 and the ‘Independence Day’ award in 1979. 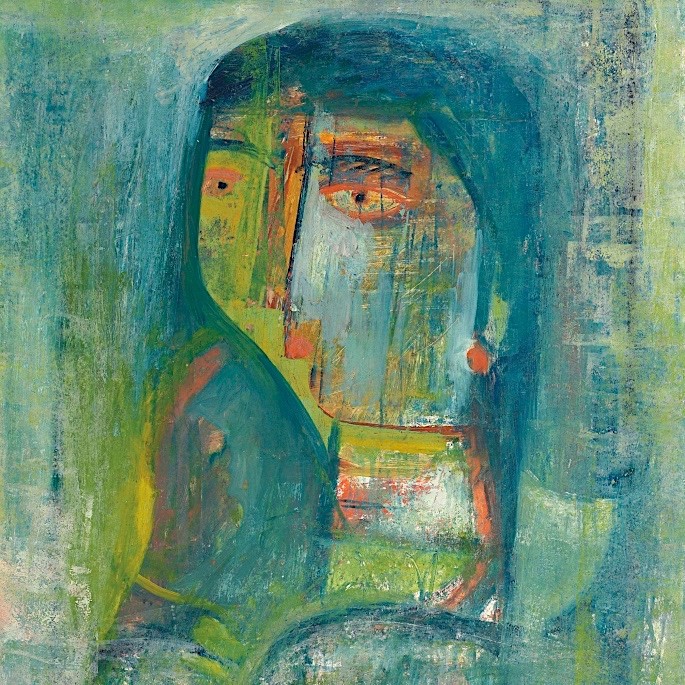 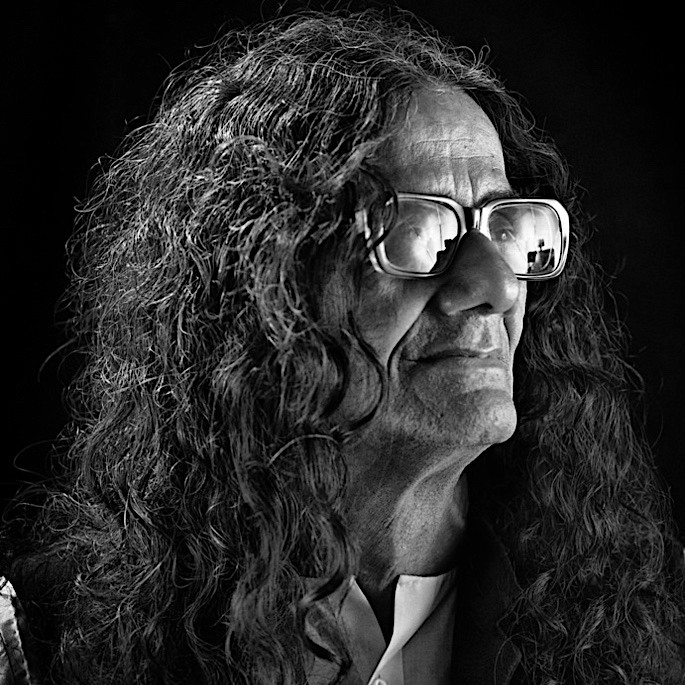 Despite coming from a poor background, Sheikh Muhammed Sultan (August 10, 1923- October 10, 1994) was one of the most influential painters of Bangladesh.

SM Sultan came from a small village in Narail, where his father was a mason.

Having a creative eye, Sultan would draw buildings that his father helped to construct. Thus this experience of his did help him to develop a liking for art.

Leaving school in 1944, the young artist travelled around India and drew portraits of soldiers he encountered along his journey.

Evidently, there are no early records of Sultan’s preservation work due to the indifference of him preserving them.

A landscape painting (1952) of Sultan, which has no name is one of his best works.

It highlights a beautiful scene that reflects the notion of tranquillity.

Sultan later received an ‘Ekushey Padak’ in 1982 which is Bangladesh’s highest civilian award for his contribution in art.

Other awards he did receive include the ‘Sangsad Award’ in 1986 and the 1993 ‘Independence Day’ award. 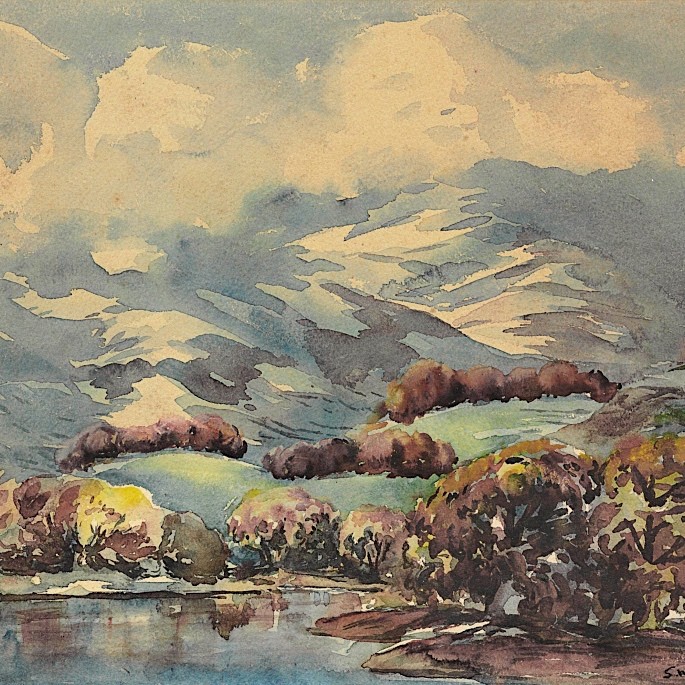 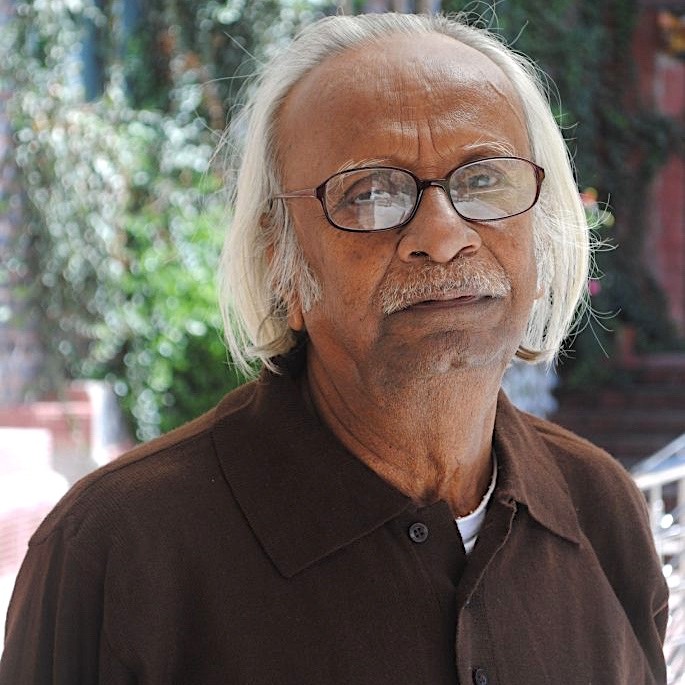 Qayyum Chowdhury (March 9, 1932-November 30, 2014) is known as one of the first generational artists of Bangladesh.

Born in Feni, his father was a bank official who frequently had a transfer. This resulted in Chowdhury living in places like Chittagong, Narail and Faridpur.

Attending the Institute of Fine Arts at Dhaka University, the artist graduated in 1954.

After graduation, he landed himself a job as a lecturer at the university.

The artist later got a job as a chief artist for many published magazines.

Being in and out of teaching and working for magazines and newspapers, Chowdhury had very little time to create paintings.

But when he did get the time, his paintings were extraordinary, especially the piece At the End of the Day (2003).

He also has an untitled painting from 2008, which is very minimal with distinct strokes and structure.

The cubist approach works brilliantly as Qayyum effortlessly depicts the life of a Bangladeshi through effective paintings. 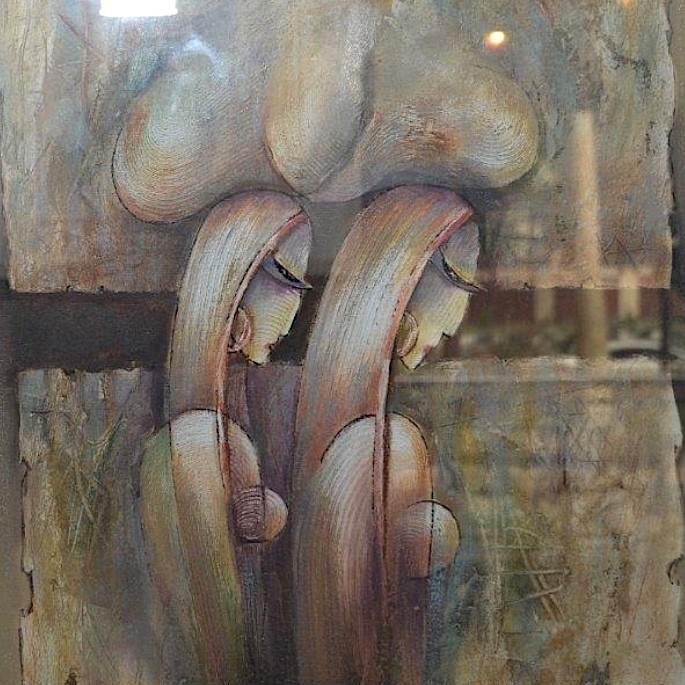 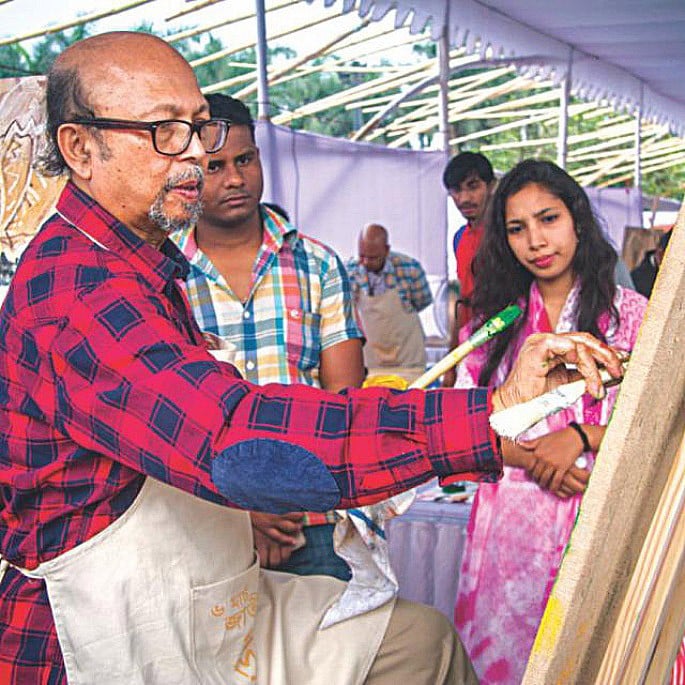 Following graduation from Dhaka University, he became a professor in the arts faculty, retiring forty-four years later in 2007.

The professor-painter takes inspiration from the beauty of Bangladesh.

From a historical perspective, the country was scattered with beautiful landscapes, nature and wildlife.

Khan took these picturesque scenes and translated them into his work.

Hashem focused on the life of Bangladeshis, helping to cultivate the country’s art and culture through paintings.

The colours he used did create an unusual appearance to what is associated with rejoicing.

Hashem went on to receive the ‘Ekushey Padak’ in 1992 and the Independence Day award in 2011. 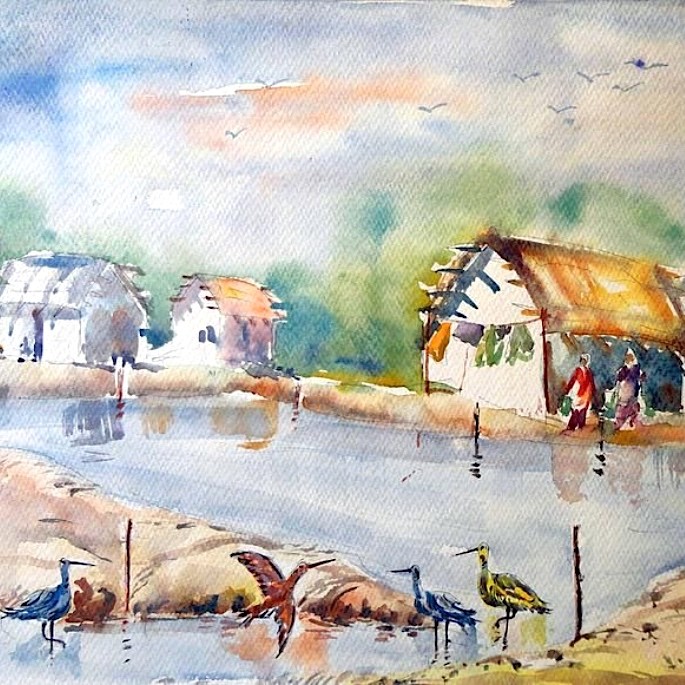 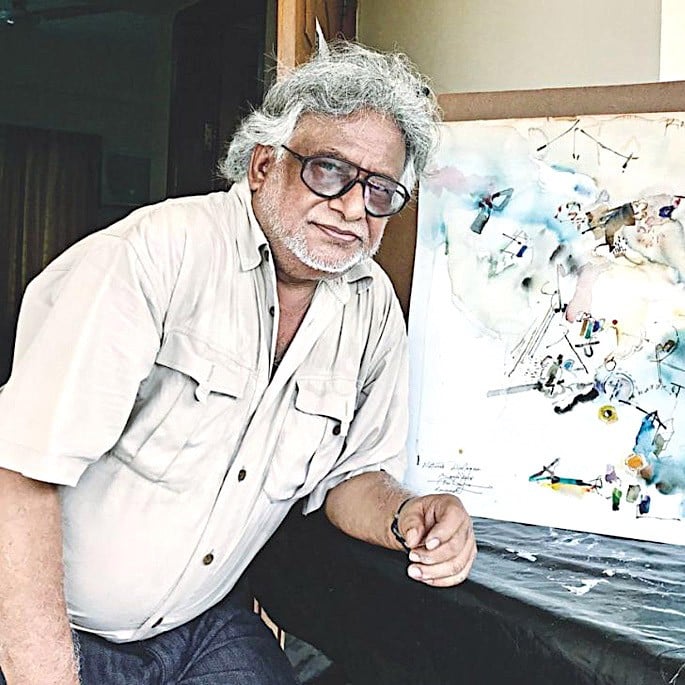 Monirul Islam born on August 17, 1943, is another prominent painter who stands for Bangladesh in art scenes abroad.

Coming from Chandpur Sadar Upazila, Bangladesh, the artist has a minimalistic and avant-garde approach to his work.

Being most notable during the 1960s, fine art critics and experts have been a favourite of this unique artist.

Completing his BA in Fine Arts, Islam went onto receive a scholarship in Spain and has been living there since 1969.

Despite living in Europe, Bangladesh continues to be the main influence on his work.

Developing his own sense style known as the ‘Monir’s School’ in Spain, the painter has been through a 40-year journey.

Perfecting his work, Monirul fuses both artistic influences from Spain and Bangladesh in his paintings.

Throughout his paintings, there seems to be more of a minimalist touch with the essence of mystery and graciousness.

The painting Gone With The Wind (2011) uses a beautiful array of acrylic grey and black tones.

Inspired by Pablo Picasso (ESP) and Salvador Dali’s (ESP) doodles and sketches, he tries to incorporate these lines and shapes into his work.

Islam is a guest lecturer to universities worldwide.

Monirul has won plenty of awards including the 1999 ‘National Award’ of Spain and the ‘Ekushey Padak’ of Bangladesh in the same year.

His artistic journey consists of exhibiting work in places such as the USA, Turkey, Egypt, Pakistan and the Netherlands. 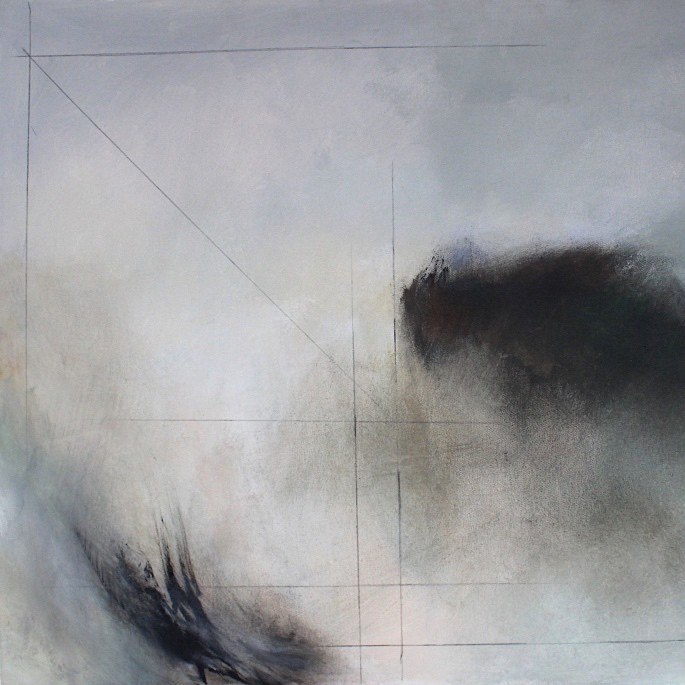 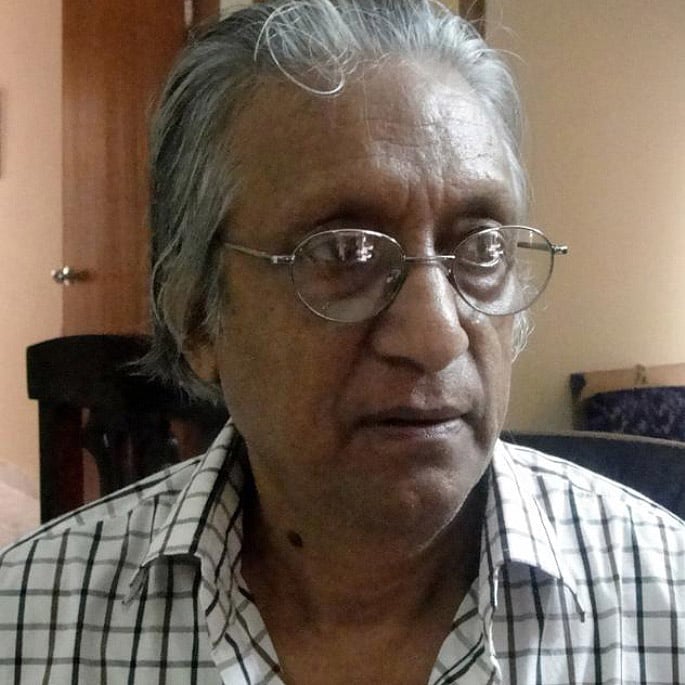 Abdus Shakoor Shah who was born on December 31, 1947, comes from the Bogra district in Bangladesh.

Along with all the other artists of that time, Shah set out to preserve the nation’s language and folklore.

Following the footsteps of the first generation painters of Bangladesh, Abdus has a unique folk style that captivates his viewers.

Some might say that his paintings are child-like and simple, but the painter tells a story through his art.

Being one of the most distinguished Bangladeshi artists, his work consists of expressing traditional Bangladeshi folk ballads.

Shah’s unique use of calligraphy in his work describes the ballads in the paintings.

The painting dating back to 2000, comprises watercolours and drawings.

The child-like paintings of the artist suggest the innocence of Bangladeshi folklore, pairing this with the symbolism in his work.

Shakoor creates something raw and unique by taking these ballads and folklores and making art.

Shah has a distinctive look that sets him apart from the rest. 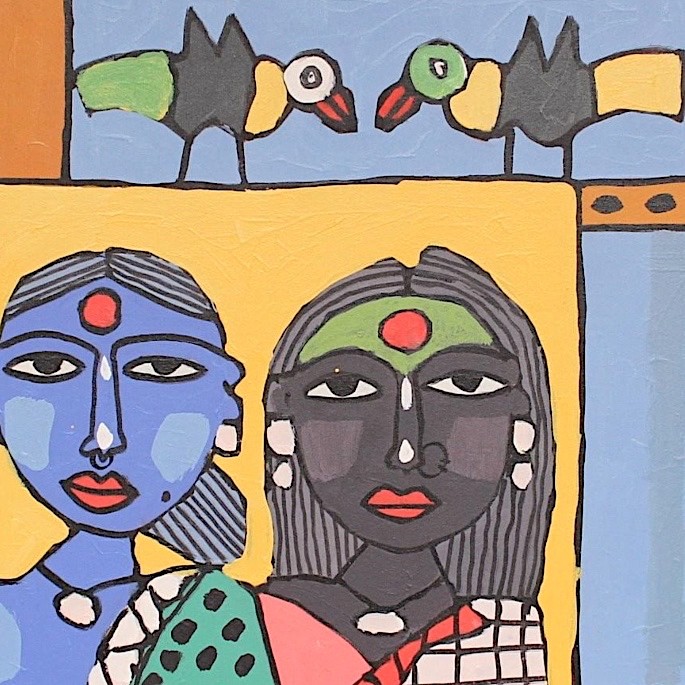 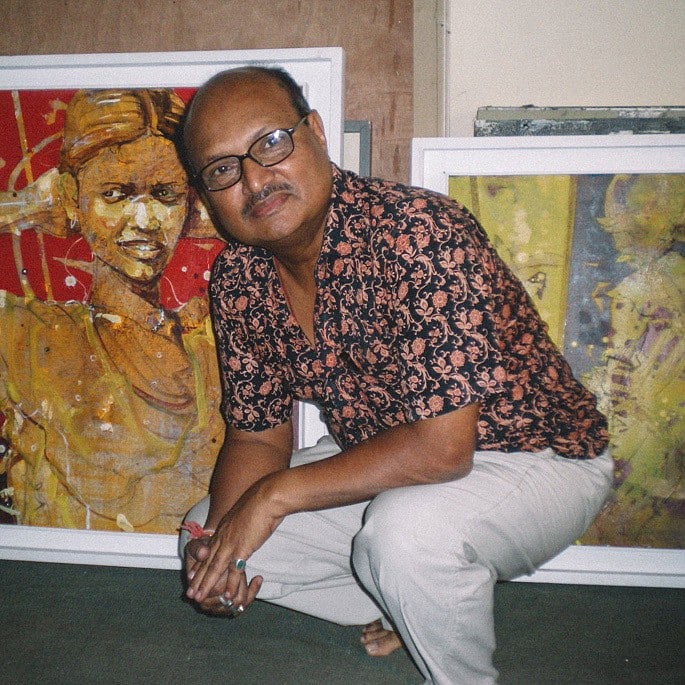 Born in 1956 at Tangail, Bangladesh, Ranjit Das is a famous painter who has produced some of the country’s most beautiful abstract work.

After graduation in Fine Arts at Dhaka University, Das went onto complete a Masters from MS University, India in 1981.

Whilst the artist is a lecturer at T.T. College in Dhaka, he has accomplished so much more.

The work of Ranjit has reached viewers in Korea. Kuwait, Qatar, France and many other places due to exhibitions and reviews.

Withing his paintings, he focuses on different essences of nature and the transformation to combine prose and poetic forms.

This then gives him a form of context for his paintings.

“To me, paintings must express its beauty and fragrance in its own way, own form and own color.

“It must come almost effortlessly from one’s soul.”

This exquisitely reflects in his own painting where he shows a young girl holding a bird.

The textures in the painting contrast with the smoothness of the reds and greens giving life to the canvas.

Along with his paintings and artistic repertoire, he has won many awards.

This includes an honourable mention at the National Art Exhibition (1990) and many awards for the best oil paintings in Bangladesh. 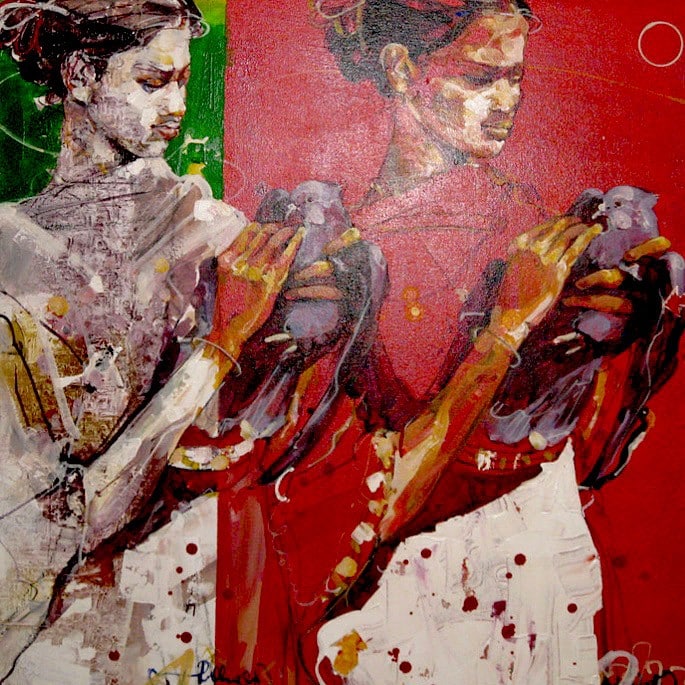 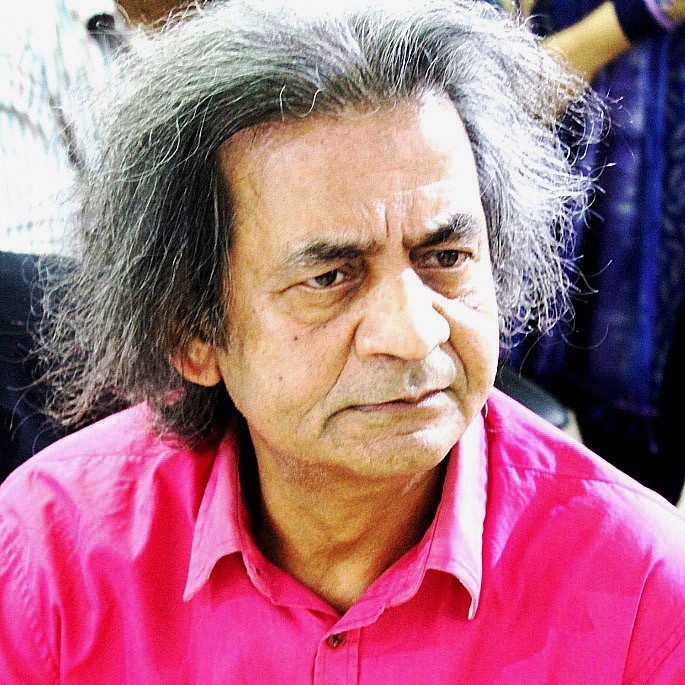 Born on September 11, 1950, in Raipur, Shahabuddin Ahmed is an experience Bangladeshi painter.

The renowned artist studied in Paris after graduating from Dhaka Art College.

He has a range of beautiful painting including Couple nr 2 (2011). The painting depicts a couple in mid-air acting as free spirits.

With a minimalistic style, his works have been recognised by many. He has gone onto having his own solo exhibitions.

Living in Paris, the artist is distinct for his painting style.

Ahmed’s iconic canvas style is influenced by European artists banking on stark realism, which is evident throughout his work.

His work often displays movement which is described as something that “possesses an inner beauty.”

The meaningful work that Shahabuddin creates is a testament to the western influence and the effects of Bangladeshi art.

Ahmed was awarded the Knight in the Order of Fine Arts and Humanities in France 2014.

The paintings of Shahabuddin are exhibited worldwide including in South Korea, Switzerland and Taiwan. 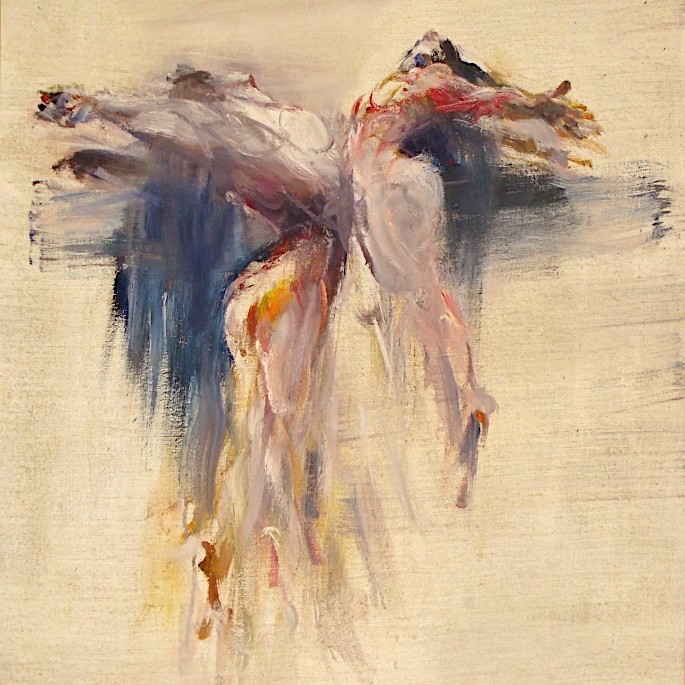 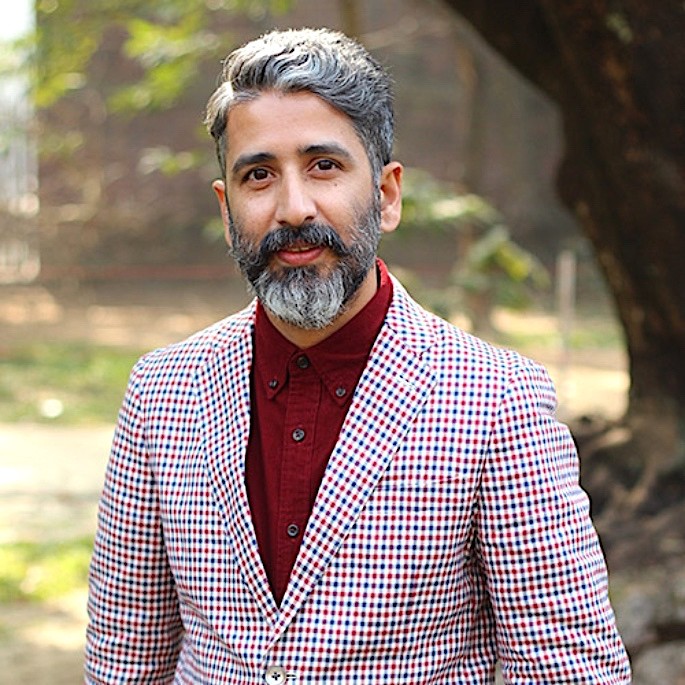 Born on November 30, 1981, in Netrakona, Bangladesh, Bishwajit Goswami completed his Masters in 2010 after gaining a Bachelors in Fine Arts from Dhaka University.

This talented young artist followed in the footsteps of other great painters from the country as his influences come from Bangladeshi culture.

What sets Goswami apart from anyone else is his audaciousness with different mediums.

Bishwajit is not afraid to break boundaries.

He collates different types of media such as collages, lights and craftsmanship into his installations.

Art enthusiasts of Bangladesh know him for painting dark figures usually celebrating the human form. This is a controversial way of art as Bangladesh is more of a conservative society.

His bold and elegant paintings suggest otherwise, displaying the human naked form and having a sense of drama and story.

The painting Quest for Soul-26 is not of a typical Bangladeshi born artist as he displays a muscular man showing all of his back.

The black pallet almost brings a sensual feel to the art, with the brush strokes and subtle colour changes throughout.

He has also had his artwork displayed as part of the Rembrandt 400 Exhibition, organised by the Royal Netherlands Embassy in 2006. 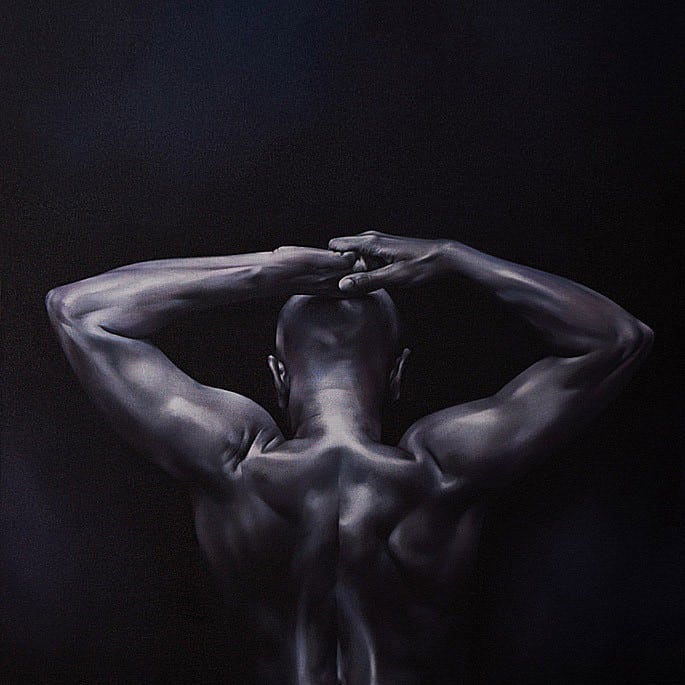 All of the artists above equate to a larger art movement in the country with more and more upcoming artists coming through from Bangladesh.

The history and journey of the country as a whole have shaped great painters alike to exhibit the works of their culture, ethnicity and backgrounds.

There is no doubt that the country is enriched with art and has embedded itself in the world of art, making a mark through these top Bangladeshi painters.