10 Best Places to Discover in Bangladesh

DESIblitz looks at the top 10 things to do in Bangladesh, a reflection of the country’s history of fine art, literature, food, and scenery.

The area is bursting with fresh seafood.

The top 10 things to do in Bangladesh do not fully cover the diverse and rich culture the country has to offer.

As a melting point of ancestry, Bangladesh is not only a culturally diverse nation, but it is also in a significant geographical location.

The heritage of Bangladesh is evident throughout the country.

Whether it be palaces, bridges or interactions with locals, the nation’s history is there to be admired.

Bangladesh is a widely undiscovered corner of Asia. There are few tourists every year which has the potential for a visit to have a more natural feel.

Travellers visiting Bangladesh may be apprehensive about the lack of touristic infrastructure.

The country is steadily developing economically, even despite the constant threat of floods and the dense population.

One thing is for sure – Bangladesh remains one of the last places in Asia for visitors to get a raw and organic cultural experience.

But Bangladesh is not just good for its immersive culture. Places like Cox’s Bazar or the Srimangal Tea Gardens are just a couple of examples of the natural beauty the country holds.

To touch the surface and act as an introduction to one of Asia’s hidden gems, DESIblitz looks at the top 10 things to do in Bangladesh. 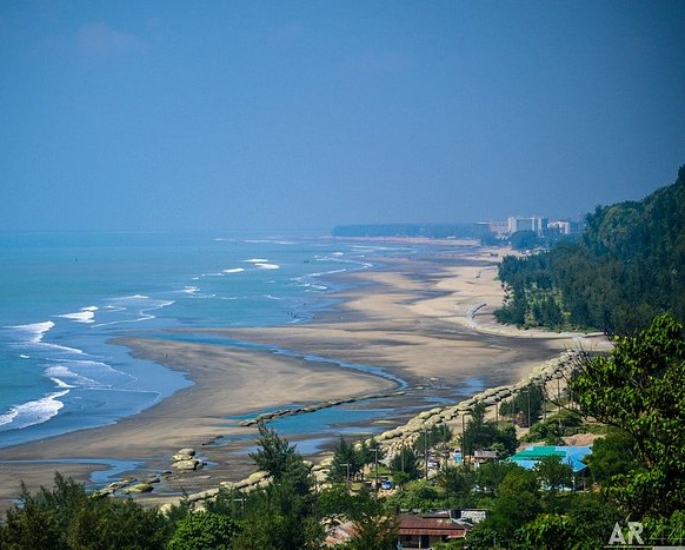 Located in the Southeast corner of Bangladesh, Cox’s Bazar is one of the main tourism centres in the country.

The town is mainly known for its beach but Cox’s Bazar is also known for other treasures.

Cox’s Bazar is an amazing place to capture some of the local cuisines. The area is bursting with fresh seafood.

The loitta fry or ‘The Bombay Duck’ (which isn’t actually a duck, but a fish) is a staple food in the area.

Fresh rupchanda is one of the most sought-after fishes in Southeast Asia and Cox’s Bazar is a great place to try it.

Add on the amazing hospitality and mesmerising views, Cox’s Bazar truly lives up to its hype.

The main attraction, however, is the beach. Stretching to more than 120km, it stands as the world’s largest sea beach.

Dubbed ‘the sandiest beach’ in the world, the whole area is a serene experience. During sunset and sunrise, the beaches are said to be breathtaking.

If you are visiting Bangladesh and looking for an area to relax with a seemingly neverending view, Cox’s Bazar is definitely the place for you. 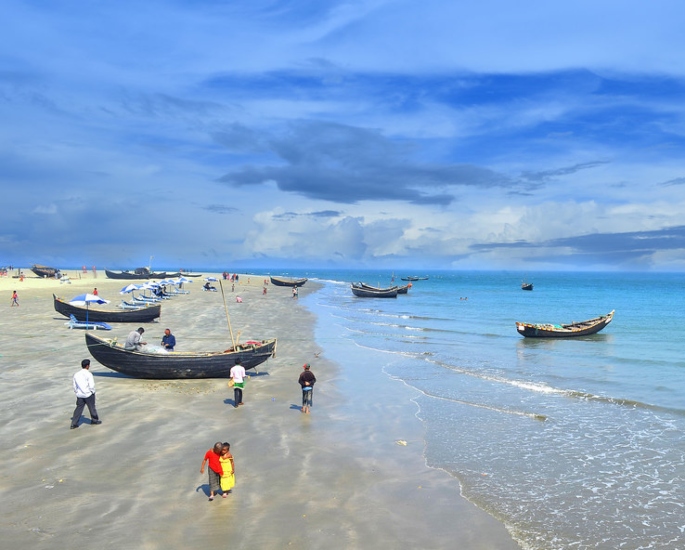 If you visit Cox’s Bazar, you will not want to miss the opportunity of going to St Martin’s Island. The island is idyllic and tropical, located northeast of the Bay of Bengal.

St Martin’s Island stands as the only coral island in the country and is also a breeding ground for sea turtles!

If you are a nature lover or a lover of beauty in general, St Martin’s Island is an ideal location.

A short ferry ride from Cox’s Bazar is all that separates tourists from experiencing immense elegance.

The water is crystal clear, the wildlife is thriving, and the air is fresh. An early morning walk on the sandy beaches is a must and witnessing sunrise or sunset is vital.

If you are looking to discover Bangladesh, St Martin’s Island is one of the best places to experience the country’s natural serenity. 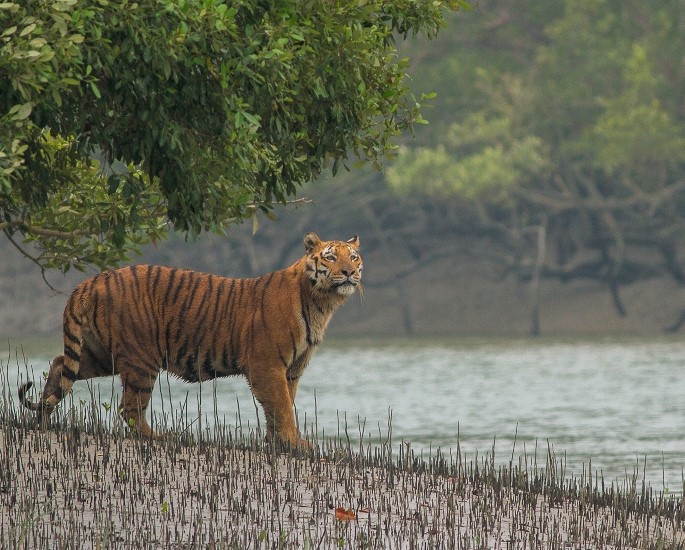 The Sundarbans are the Earth’s largest mangrove forest and it is also the home of the regal Bengal Tiger.

The mangrove forest is a world heritage site which spans over 1,000 square kilometres, Sundarbans is one of the most popular tourist destinations in Bangladesh. The forest is also filled with medicinal plants.

Formed by the confluence of the Padma, Brahmaputra and Meghna Rivers in the Bay of Bengal.

The area is also great for its diverse collection of wildlife.

According to estimates, there are more than 250 species of birds, 200 species of fish, 14 species of reptiles and a variety of other animals like monkeys and deer.

This is also the home of Irrawaddy dolphins!

The main wild attraction is the Bengal Tiger. The large and extremely powerful apex predator is one of the most respected species in the world.

The Sundarbans National Park, between India and Bangladesh, has a large, concentrated population of Bengal Tigers.

A mix of mangrove beauty and wild animal abundance makes a visit to the Sundarbans a unique experience.

Witnessing the Bengal Tiger, the national animal, whilst trekking through the world’s largest mangrove forest is a perfect way to see what Bangladesh’s nature has to offer the world. 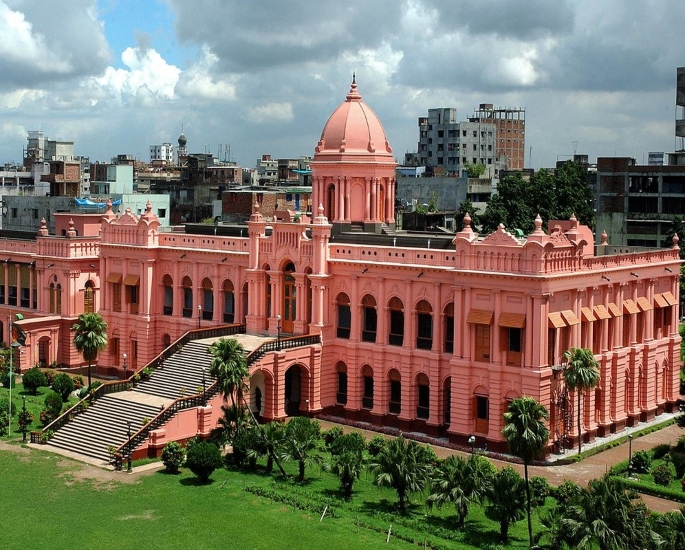 The vibrant pink palace is located in the Sadarghat area in Dhaka, Ahsan Manzil is a fenced-off oasis.

The palace was built between 1859 and 1872 as the residence for the Nawab of Dhaka. Here, many important decisions regarding the independence of India were decided. Here the Muslim party of East Bengal was formed.

Ahsan Manzil serves as a reminder of Bangladesh’s colonial past.

Western architecture strikes a beautiful contrast between the bustling streets of Sadarghat and the tranquillity of the palace.

After unauthorised inhabitation of the palace took place, slums formed within the grounds.

The then father of Bangladesh, Sheikh Mujibur Rahman, ordered the palace to become a museum and tourist attraction in 1974.

After Mujibur Rahman’s death, plans to turn Ahsan Manzil into a museum were halted. In 1985, the plans were rescheduled through the Martial Law Act.

Ahsan Manzil is one of, if not the most, important architectural monuments in the country. On top of that, it is a regal structure, standing elegantly amongst the business of the city.

Surrounding the palace is luscious greenery.

Along the banks of the Burighanga River, Ahsan Manzil is the destination to go to if you are looking for architectural beauty within Bangladesh. 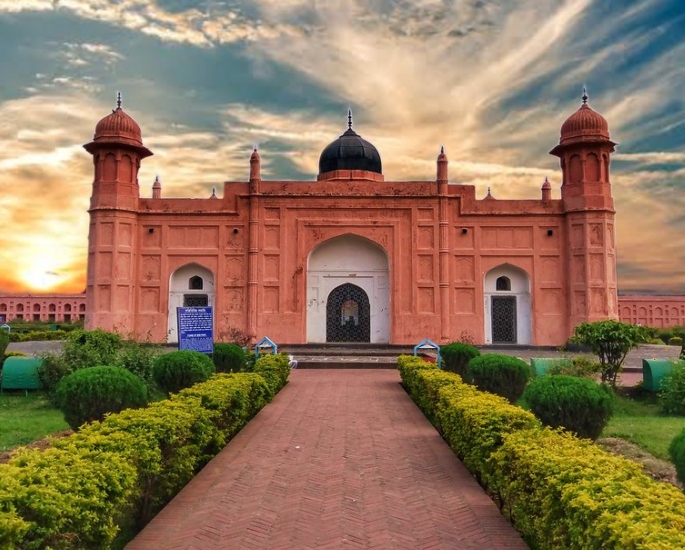 An unfinished Mughal fort from the 17th century, Lalbagh Fort is one of the key attractions in Dhaka.

Architectural beauty is a key reason why so many tourists and locals visit the fort every day.

The next governor did not carry the construction on due to a family tragedy. The fort stands incomplete but remains captivating.

Lalbagh Fort is massive in size and is said to be the finest art signature of its era.

Located in old Dhaka, Lalbagh Fort is a significant structure when discovering Bangladesh. 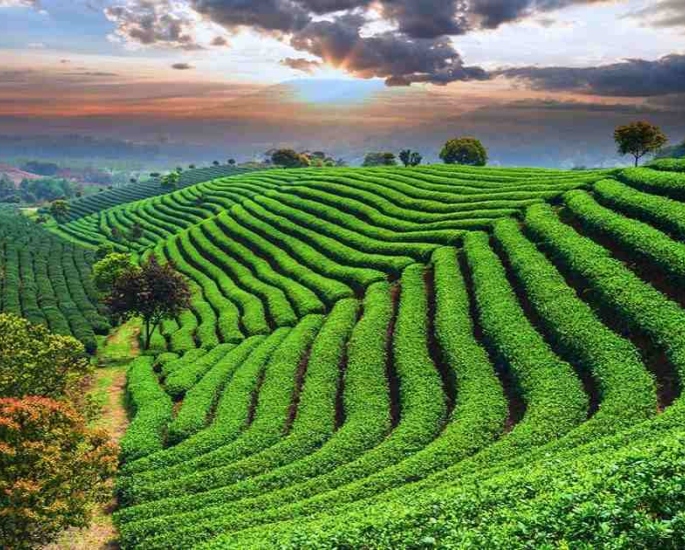 Dubbed the tea capital of Bangladesh, Srimangal sits in the northwest of the country. The vivid green rolls over the hills as far as the eye can see.

Along with the terraced tea gardens, there are also pineapple, rubber, and lemon plantations within Srimangal.

During the rainy season, the gardens are lifted with a mystic air and a light fog which adds to the beauty of the plantations.

Along a tour of the gardens, tourists will find that there may not be another person in sight. This exclusivity allows you to really take in the tranquillity the plants provide.

There are also a number of 5-star hotels and resorts. Srimangal is an excellent location for a scenic and relaxing experience.

Bangladesh is also the tenth largest tea producer in the world. Visiting a tea garden would be a perfect way to discover what Bangladesh’s economic specialities are.

If you can’t go a morning without a cup of tea, Srimangal Tea Gardens is the place for you! 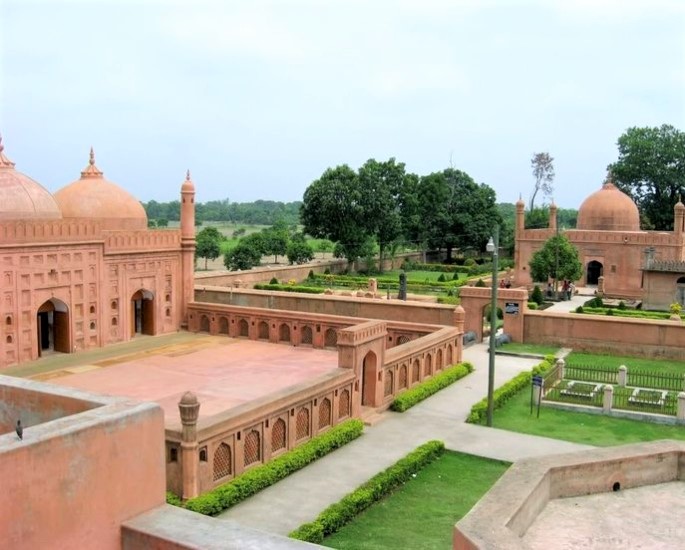 In order to discover Bangladesh, the history of the country has to be acknowledged.

In the 15th century, a Turkish general ordered the city of Bagerhat to be built.

Within its walls, there were over 360 beautifully structured mosques, with the mosque of 60 domes the most famous.

The city is listed as a UNESCO heritage site and the historic area is listed by Forbes magazine as one of the 15 lost cities of the world.

Here, a world gone by is evident, some of the structures are very well maintained and spark a vivid picture of Bangladesh’s ancestorial past.

The architectural design is a combination of Arab, Persian and Bengali influences.

The sultanate era, in which the city was made, attracted visitors from middle and central Asia who all had new ideas about the structures of the mosques.

If you want to discover the deeper roots of the religious history within Bangladesh, the lost city of Bagerhat contains countless examples of Islamic architecture.

Equally, the area is an amazing place to walk through a city that once flourished, and now only
remnants remain. 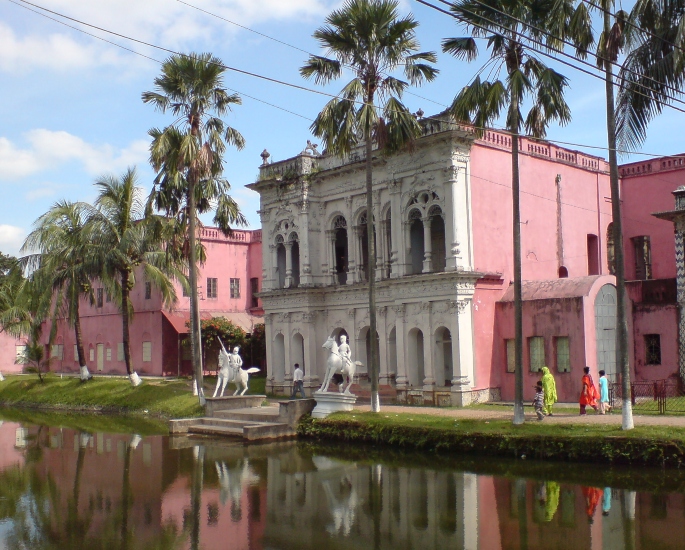 Carrying on in the lost city mould, Panam Nagar is an ancient city situated in Sonargaon.

In the 15th Century, Bengal ruler Isa Khan named the city the capital as it was once a significant trading and political centre.

The World Monuments Fund declared Panam Nagar as one of the world’s ruinous historical locations.

Each building has a different style but the regal essence of the city still remains in the redbrick and terracotta.

The Greek and Mughal architecture styles are paired with evidence of a colonial past.

There are fine arts museums, churches, abbeys, mosques and other attractions in Sonargaon.

Panam Nagar is a time machine back to a medieval past, the area will have enough to occupy you for a day as you travel through a lost world. 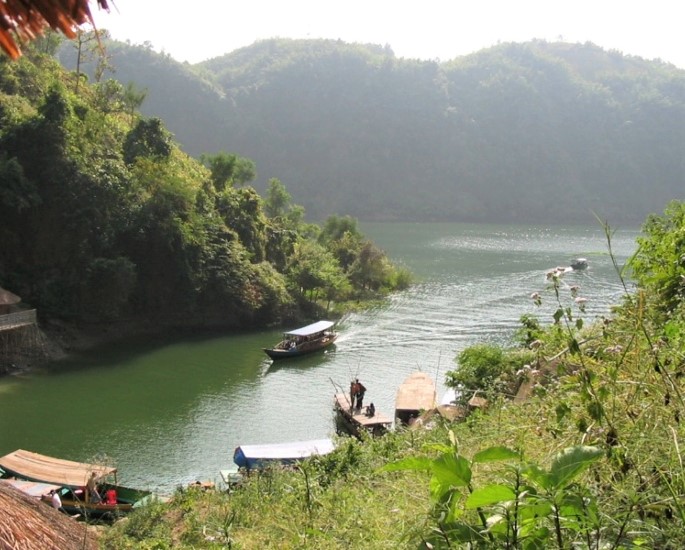 The Chittagong Hill Tracts is an area that separates itself from the rest of Bangladesh.

Whereas the towns within other areas may be bustling and boisterous, Rangamati is a peaceful area.

The town is made up of tribal and Bengali people.

The Chittagong Hill Tracts are home to around 11 different ethnic minority groups who are mostly of the Buddhist religion.

Rangamati is famous for Kaptai lake. It is the largest lake in Bangladesh. The broad body of water is guarded by large green hills.

Visiting Rangamati will be a chance to kayak on the lake, bathe in the Shuvolong waterfall or visit the holy Rajbana Vihar (an ancient Buddhist monastery).

Rangamati is surrounded by a spiritual atmosphere and a beautiful insight into discovering Bangladesh. 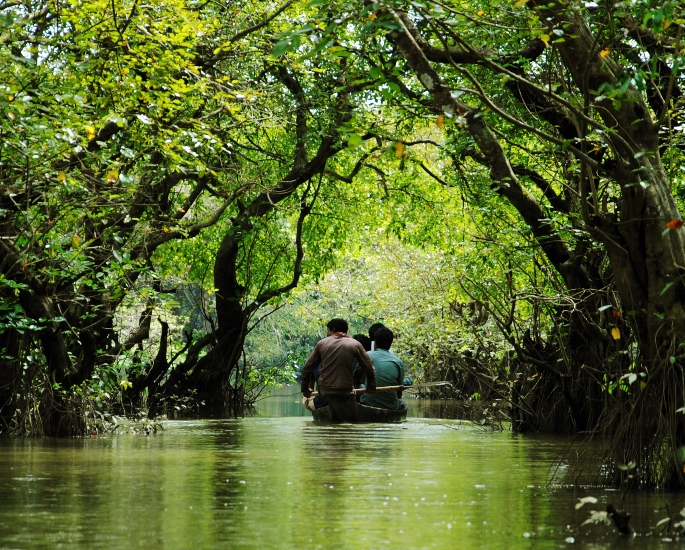 It is said that Sylhet is the ‘London of Bangladesh’, not because it is a flourishing metropolis but because of migration from the area to England.

Many of the Bengalis you will meet in England are from, or from near, Sylhet. The 2015 census showed that 95% of British Bangladeshis are from Sylhet.

So why is Bangladesh’s second smallest city a must-visit?

Sylhet has become a hub of well-maintained natural and heritage sites. The area includes Jaflong, a popular destination for tourists.

Jaflong sits amongst rainforests, hills and a beautiful river, Sari. The destination is also on the border of India, so a trip to Bangladesh’s neighbour is a stone’s throw away.

Other places of note include Baishtila, Bisnakandi, Shah Jalal Dargah, among others.

Along with beautiful scenery and historical monuments, Sylhet is a great place to experience the busy Bangladeshi city life.

Sylhet is increasingly becoming a hotspot of commerce, with shops of all kinds popping up every day.

High-class restaurants and hotels are easily found within the main Sylhet town and surrounding areas.

There are also restaurants with rooftop infinity pools, a great way to relax in the warm evenings and look over the city.

Visiting Sylhet is a great way to see the origins of the majority of British Bangladeshis.

Bangladesh is diverse in many ways. The country has deep roots in art, music, poetry, religion and many cultures.

A trip to Bangladesh is not like a holiday to other established tourist destinations, it will be more of a raw and organic trip.

With some mosquito spray, suitable warm weather clothing and stomach medicine at the ready, a trip to Bangladesh will be as mesmerising as well as humbling.

Takbir enjoys reading about history, learning new things and being disappointed by his football team. He is also a massive Star Wars fan, believing in Yoda’s quote “do or do not, there is no try".