A female stalker has been sentenced at Southwark Crown Court for breaching her restraining order. She has a long line of convictions.

"she has no remorse at all for what she had done."

Farah Damji, aged 53, of no fixed address, was sentenced to 27 months in prison for breaching her restraining order. The stalker had made the life of a churchwarden “complete hell”.

She was sentenced in her absence as she managed to evade arrest.

Damji, a former New York art gallery owner, was jailed for five years in 2016 for stalking the engineer after meeting him on an online dating site in October 2013.

Whilst imprisoned, Damji made £5,000 from donations on Twitter to hire a top lawyer to appeal her sentence for stalking in November 2016.

Damji also published “character assassinations” online of people she was prohibited from referencing.

Southwark Crown Court heard that she wrote a letter to a government body accusing the investigating officer of “stalking and harassing her”.

She claimed that PC Vincent Chan had “scared” her elderly mother by contacting her without permission.

Even though PC Chan is one of several names Damji is banned from mentioning, she launched an online campaign to “besmirch the character” of the officer.

Damji was convicted in February 2019 of two counts of breaching the restraining order on April 2018 and June 2018.

The stalker claimed she went to her GP to get a sick note rather than hear the verdict.

In February 2019, a warrant was issued for her arrest but she remains on the run.

Damji had asked her barrister, Claire Mawer, to adjourn the case for a psychological report and to allow her to appear via video link. However, sentencing went ahead.

“You are being treated as a puppet while she is refusing to come to court.

“She has made herself absolutely scarce so that the police cannot find her.

“I have no doubt that she knows this hearing is taking place today, in fact she has instructed Ms Mawer to ask for a video hearing, she appears to have no intention of appearing in person, even knowing that she has an outstanding warrant.

“Her Tweets show that she has no remorse at all for what she had done.

“Farah Damji is acutely aware of her legal rights and entitlements, she thinks she has been denied her rights, which she furiously attempts to get what she believes is her due.

“Her deliberate disregard of that law is flagrant, she has absolutely no respect for anyone but herself, she is thoroughly self-centred and thinks the world revolves around her.

“She pays no heed whatsoever to them if they don’t suit what she sees as her interest.

“Firstly it is safe to say that her protracted behaviour towards her victims had the most profound effect on them, secondly that it demonstrates her vindictiveness.

“There are so many of them because as each one gave what she considered to be bad advice, she sacked them and proceeded to harass them.” 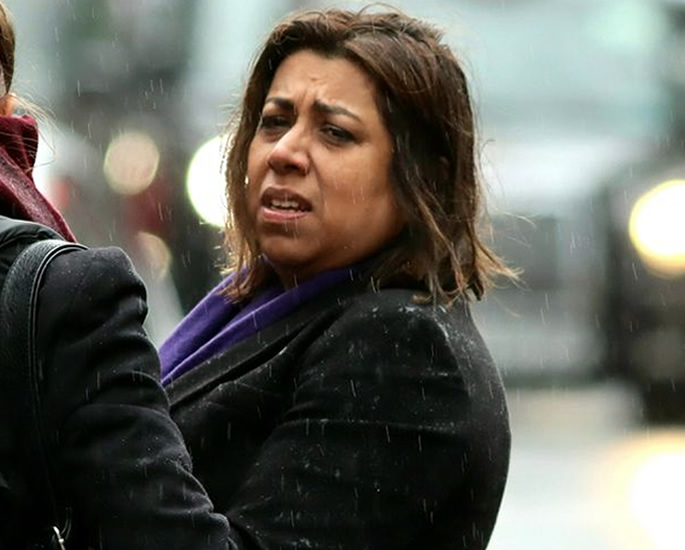 Judge Gledhill cited a psychological report and added: “The only mitigating factor is her mental health.

“However complex her psychological condition, she is an intelligent person and knows what the law permits her to do, and this does not prevent her from deliberately breaking the law.”

Damji has numerous convictions for fraud, theft, perverting the course of justice and three separate counts of stalking.

She tried to sabotage a previous trial by calling the victim of one of her thefts and told him not to attend court.

“The other matter concerns impersonating the secretary of a government minister telling CPS to drop the case on the phone.

“In short, she made the lives of three people with who she had become entangled with complete hell.”

Among the list of people, Damji was prohibited from contacting via a restraining order included her past legal representatives.

Damji was convicted of two counts of breaching a restraining order.

The Mirror reported that in her absence, she was sentenced to 27 months in prison, with half to be served on licence and ordered to pay £3,500 costs.

Dhiren is a journalism graduate with a passion for gaming, watching films and sports. He also enjoys cooking from time to time. His motto is to “Live life one day at a time.”
Indian Lover kills Married Woman’s Son & Hides Body
65-year-old Indian Man forces 38 Medical Staff in Quarantine