Wife of Indian Hostage Taker of 23 Children killed by Mob

A raging mob mercilessly beat and killed the wife of Indian hostage-taker who held 23 children captive at gunpoint in his basement.

“She has head injuries and was bleeding"

The wife of the Indian hostage-taker, Subhash Batham was beaten to death by villagers while trying to flee from her residence.

Batham from Farrukhabad in Uttar Pradesh, India, held 23 children hostage at his home at around 3.00 pm, on Thursday, January 30, 2020.

He invited the children to his house under the pretence of celebrating his one-year-old daughter’s birthday.

Once all the children were inside the house, Batham bolted the doors and held the hostages at gunpoint.

Upon realising the children had not returned after a while, parents approached Batham’s house and knocked on the door.

In response, Batham began shooting at the parents who became alarmed and contacted the police.

At around 5.00 pm when the police arrived they tried to negotiate with Batham. However, he began shooting at them and also threw a crude bomb at the officials.

“The man called the children for a birthday party and held them hostage in the basement of the house. He fired six shots from inside the building.”

In the attack, a policeman and a local resident were harmed. The commandos of the Anit-Terrorism Squad also arrived at the scene.

After several hours of negotiation, Batham released a six-month-old girl. He handed over the child to his neighbour from his balcony. 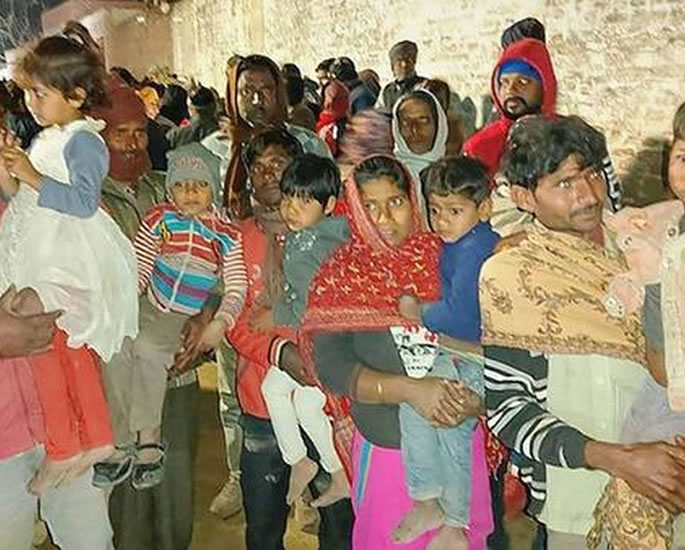 Throughout the encounter, the police suspected that he was drunk. The accused was also known for his aggressive nature and his alleged involvement in a 2001 murder.

Police also suspected that he may have been mentally unstable. Initially, Batham demanded to speak to the local MLA but refused when he arrived.

Throughout the intense nine-hour ordeal, a team of NSG (National Security Guard) commandos were positioned on a special aircraft to reach Furrukhabad.

Chief Minister Yogi Adityanath was also reported to be observing the situation from the state capital Lucknow which is almost 200 km from Farrukhabad.

An award of Rs 10 lakh (£10,591.92) was announced by the Chief Minister for the Uttar Pradesh police team that successfully rescued the hostages.

“All personnel who took part in (the) operation will be given a certificate of appreciation.”

As the policemen forcefully entered his home they shot at Batham in defence killing him on the spot.

Villagers witnessed his wife trying to run away and began throwing stones, bricks and started beating her.

Police had to intervene and the wife was taken to the hospital. Mohit Agarwal said: “She has head injuries and was bleeding when she was taken to hospital. She has tried to run.”

Yet the motive behind the crime has not been confirmed. It has been reported that the lack of toilet facilities in Batham’s house may have been a motive.

Earlier, Batham sent a letter to the local district magistrate. He complained of the lack of toilet facilities and that he was allegedly denied government housing.

He also stated that he had an ailing mother who was forced to defecate in the open.

In the letter, he continued to mention that his request to authorities to build a toilet in his house remained unheard.

It was also reported that his wife succumbed to her injuries and died in hospital. Her hand in her husband’s crime is unknown, however, police believe she was involved.

After being held captive for nine hours, all the children were successfully evacuated and reunited with their distraught parents.

Ayesha is an English graduate with an aesthetic eye. Her fascination lies in sports, fashion and beauty. Also, she does not shy away from controversial subjects. Her motto is: “no two days are the same, that is what makes life worth living.”
Indian Man parades head of Wife after Decapitating Her
Indian Student aged 23 Stabbed near University in Canada