Urvashi Rautela was spotted planting a kiss on Deepika Padukone onboard a flight. A picture was posted on Instagram Stories.

Deepika smiled and closed her eyes.

Urvashi Rautela is in the headlines again, this time planting a kiss on Deepika Padukone.

The pair had been on the same flight when Urvashi decided to kiss the actress on her cheek.

A Deepika Padukone fan account took to Instagram and posted a Story of the two celebrities together.

For the flight, Deepika wore a black outfit and a denim jacket. She completed the look with some classic white Adidas Superstars.

In the photo, Urvashi was seen holding Deepika’s face and planting a kiss on her cheek. Meanwhile, Deepika smiled and closed her eyes.

Deepika sat in her seat with a pillow on her lap while Urvashi stood and leaned over her. 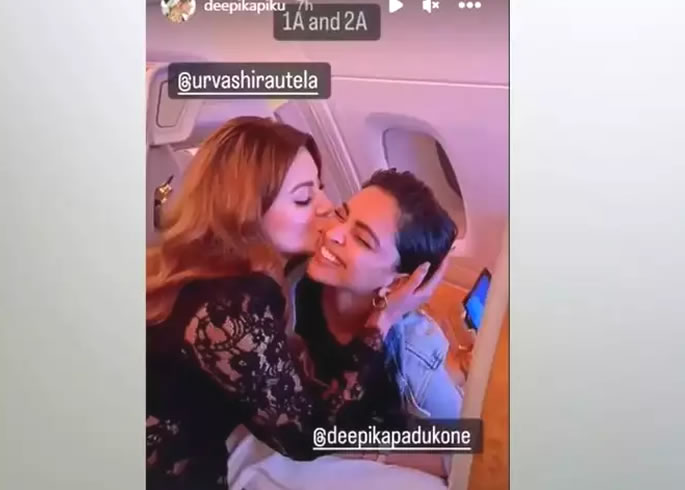 The pair reportedly came into contact with one another, having been on the same flight from Dubai to Mumbai.

Urvashi Rautela has been in the headlines in recent weeks due to her interactions with celebrities.

She previously posted an edited video featuring alternating shots of her blushing and Naseem Shah smiling.

Things between the pair started after Pakistan defeated India in the Asia Cup.

But it led to social media users trolling Urvashi.

Things backfired further when Naseem was asked about the video and the cricketer admitted that he did not know who she was.

He said: “I am smiling at your question. I don’t know who Urvashi is. I only focus on my match.”

This came after she claimed that a person she named ‘RP’ waited for her for 10 hours in a hotel lobby while she was getting some sleep.

“It’s funny how people lie in interviews just for some meagre popularity and for hitting the headlines.

“Sad how some people are thirsty for fame and name. May God bless them.”

This led to the pair aiming jibes at each other.

However, she stated that the apology was for her fans, not Rishabh.

In an Instagram Story, she wrote: “That sorry was for my fans and loved ones that I had nothing to say…”

Urvashi has now become the most followed Bollywood celebrity on Instagram, with over 56 million followers.

Dhiren is a journalism graduate with a passion for gaming, watching films and sports. He also enjoys cooking from time to time. His motto is to “Live life one day at a time.”
Sonakshi Sinha & Huma Qureshi share ‘Double XL’ Teaser
Aliza Sultan accuses Feroze Khan of Abuse & Infidelity