Government cuts have swept into the British education system by increasing tuition fees from £3000 to £9000. Ministers voted with a 21 vote majority to introduce the increase. Whilst for foreign students, a cap has been introduced to reduce non-EU students staying in the UK after their courses.

The UK government voted to increase student tuition fees for UK universities and higher education. In a vote on 9th December 2010, the coalition voted 323 in favour and 302 against, giving a majority of 21 votes for the motion to be passed to raise fees to a maximum of £9,000 per annum from £3000.

Whilst the result was being decided, thousands of students marched and protested on the streets of London including many British Asian students all unhappy about the fees rising and the cost of education becoming higher than ever. This quickly turned into violence and vandalism as students got angry. Parliament Square was initially taken over and hoards of students pressed against lines of police opposite the Houses of Parliament. Police on horses contained the crowds but the scenes were chaotic. 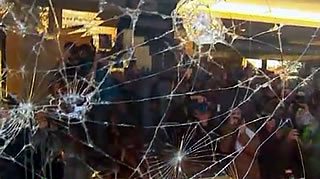 Students smashed windows of the UK Government’s Treasury building and broke windows of the Conservative party headquarters and hijacked around the building. Riot police acted and dispersed the crowds and key perpetrators.

There were multiple points where protests took place and injuries to both police and protesters occurred and over thirty arrests were made. Police reported that officers came under attack with acts of vandalism and violence by protesters. Flares, sticks, paint balls and snooker balls were all used against the police. Incidents of violence by the protesters include, vandalism of statues in Parliament Square, including that of Winston Churchill, setting the Christmas tree in Trafalgar Square alight, smashing windows at shops in Oxford Street and a sit-in by over 130 students at the National Gallery. 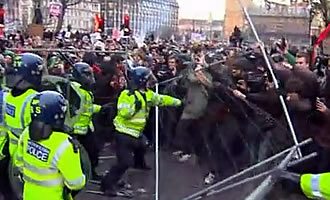 A car containing Prince Charles and the Duchess of Cornwall was stacked amidst the violence after the MPs voted. A window was cracked and the car hit by paint, but the couple were not harmed. Prime Minister David Cameron said it was ‘shocking and regrettable’ that protesters had attacked the prince’s car.

The motion voted for means that fees will rise to an upper limit of £9,000 per year and universities will be required to protect access for poorer students, if more than £6,000 per year is charged. Many of the protesters told television crews of their anger and opposition to the rise. One student said: “Even though the government claims this is going to help the economy where know for a fact there are many other ways it could be done.” Another passer-by said:

“This is a product of everything being seen in financial terms and we need to think about what education is actually for and who it’s for.”

Scotland Yard said an investigation has been launched into the student disorder seen across London between 10 November and 10 December 2010. In a statement, the force said: “Whilst a large majority of protesters came to demonstrate peacefully, a significant number came intent on violence. This will not be tolerated and anyone identified as being actively involved in criminality at the student protests will be prosecuted.” 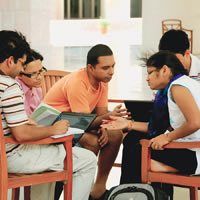 The news of the fees has also been echoed to non-EU students, for example, from India and Pakistan. Over 57,000 foreign Indian students attended higher education in 2010, being the second largest group after Chinese students. Universities have no cap for student fees charged from countries outside the EU, and on average a foreign student plays between £9,000 to £14,000 currently, significantly more than domestic students.

It’s been reported that the fees will not rise immediately for such students. But there may be increases in the future for all students to meet the university budgetary requirements. It will be down to the universities to ensure safeguarding is met for students.

Another area affected by overseas students is the notion of them wanting to stay in the UK after their courses. Under new UK immigration plans, students will no longer find it easy to stay on and look for work in this way. Minister Damian Green said: “This government wants high calibre students with the genuine desire to study to come to our country for temporary periods, and then return home.” 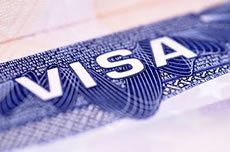 The student visa system will be reviewed and the aim will be to reduce the number of people entering Britain to study below degree level. English language requirements and students rights to work will be made stricter. Mr Green said: “Too many students coming to study at below degree level have been coming here to live and work… We need to stop this abuse.”

As well as these developments in the British education system another twist in the process is that UK universities are being allowed to deliver courses directly in India. Collaborating with universities in India, British universities have started to develop such courses. Therefore, Indian students will be allowed to study UK degree courses delivered locally instead of travelling to the UK. One of the key objectives of the programme is to give poorer students that chance to study for UK degrees for whom otherwise it would be literally impossible.

In addition to UK courses being delivered, the ‘Foreign Providers Bill’ currently under review in India could make it possible for full institutes to be set-up in India. However, most students from India and professional opinions in the UK conclude that students will still want the complete experience of being in the UK and having a real taste of local ways, something that will not be possible if they stay in India to study.

The changes to the British education system are vast and the cost of getting a degree will evidently introduce social class divides making it harder for less wealthy children to have access to higher education easily. Immigration will definitely play a role to cap number of students from India and Pakistan entering the country to study and will potentially prohibit the opportunities once available to such students in the past. Therefore, education in the UK will be at a price and no longer just a simple right.

Amit enjoys creative challenges and uses writing as a tool for revelation. He has major interest in news, current affairs, trends and cinema. He likes the quote: "Nothing in fine print is ever good news."
O2 Scour UK for the next Indian Soap Star
Tata new owner of British Salt