Shocking video footage shows members of a Sikh charity being attacked whilst they were out helping the homeless.

"Move yourself from my family now!"

A video circulated on social media, showing members of a Sikh charity being attacked whilst out helping the homeless.

The charity involved was the Midland Langar Seva Society (MLSS) and it is believed that the incident happened at one of their feed sites in West Bromwich.

MLSS frequently goes out and provides hot food and drink to those living on the street, schools, safe houses and those on the poverty line.

But a video showed some volunteers being attacked by another group, believed to be a family.

It appeared as though there was an altercation between one family member and another man who may have been an MLSS volunteer but did not have a high-visibility vest on like the other volunteers. 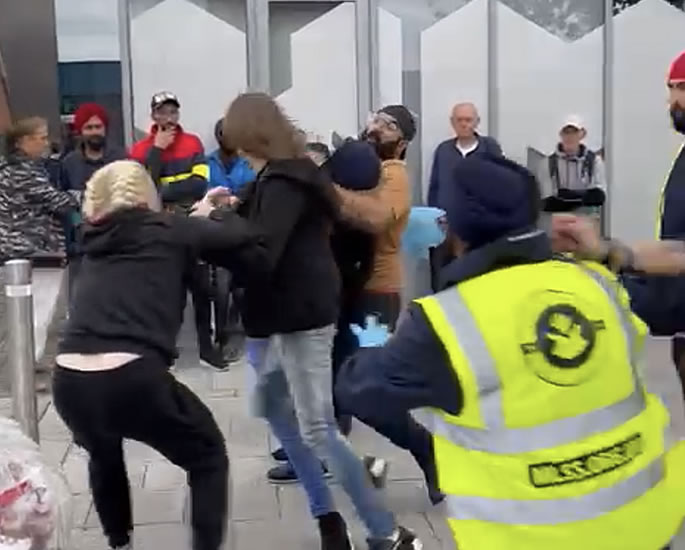 As the British Asian man stands over the other man, a young woman dressed in black rushes over and pushes him before kicking him.

Meanwhile, some of the charity workers grab the woman and try to pull her away.

A young man tries to get involved but is stopped from doing so by an older charity worker.

This angers the young man, who squares up to the older man, shouting:

“That’s my family that is.”

Despite efforts to calm the situation down, the young man remains aggressive and tries to force his way over to his relative on the floor, repeatedly saying:

“Move yourself from my family now!”

Other family members push him away in an attempt to defuse the situation.

However, things become more heated when one of the charity workers who was allegedly involved in the initial altercation got involved.

The young man squares up to him and swears at him.

At that point, the British Asian man involved in the altercation runs up behind the young man, grabs him around the neck and pulls him to the ground.

This escalates the situation and other family members get involved while other members of the Sikh charity frantically try to stop violence from breaking out. 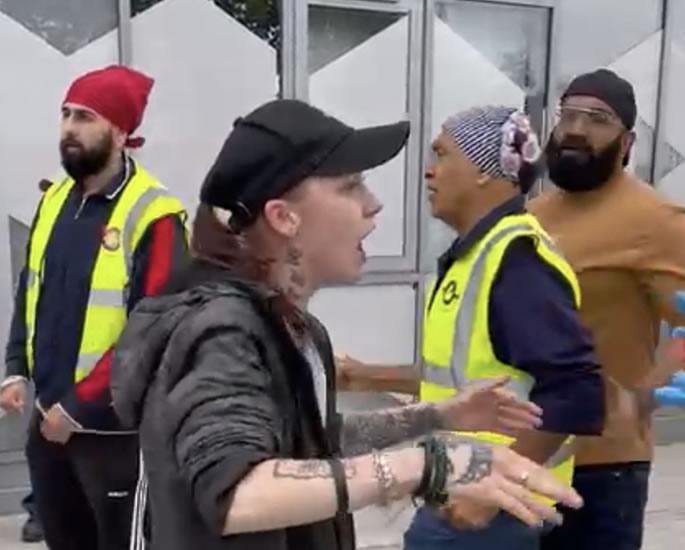 The charity workers manage to get the situation under control, urging the group to leave the area.

One family member is allowed to stay behind.

It is not known what was the cause of the altercation but a video of the incident circulated on social media before being deleted at the request of MLSS. 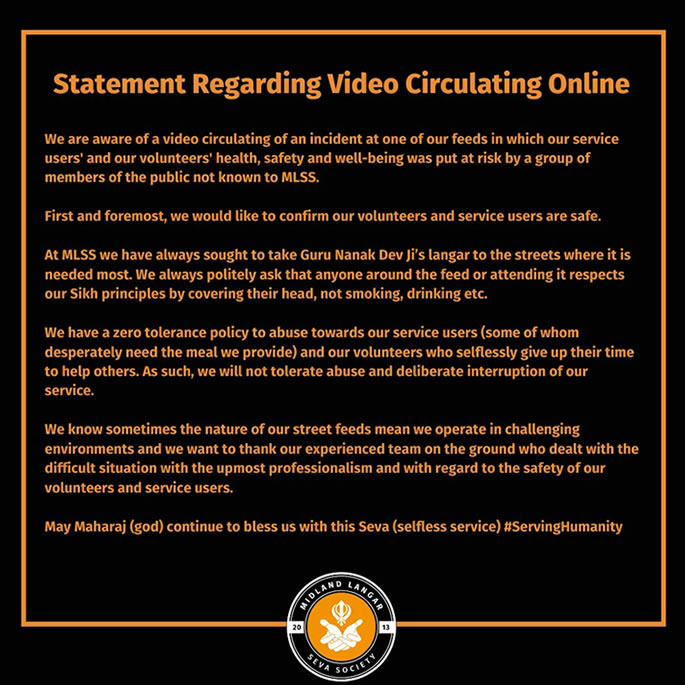 The charity later issued a statement:

“We are aware of a video circulating of an incident at one of our feeds in which our service users’ and our volunteers’ health, safety and well-being were put at risk by a group of members of the public not known to MLSS.

“First and foremost, we would like to confirm our volunteers and service users are safe.”

“At MLSS we have always sought to take Guru Nanak Dev Ji’s langar to the streets where it is needed the most.

“We always politely ask that anyone around the feed or attending it respects our Sikh principles by covering their head, not smoking, drinking etc.

“We have a zero-tolerance policy to abuse towards our service users (some of whom desperately need the meal we provide) and our volunteers who selflessly give up their time to help others.

“As such, we will not tolerate abuse and deliberate interruption of our service.

“We know sometimes the nature of our street feeds mean we operate in challenging environments and we want to thank our experienced team on the ground who dealt with the difficult situation with the utmost professionalism and with regard to the safety of our volunteers and service users.”

Dhiren is a journalism graduate with a passion for gaming, watching films and sports. He also enjoys cooking from time to time. His motto is to “Live life one day at a time.”
Vietnamese Woman details Indian BF’s Forced Arranged Marriage
Who is new Home Secretary Suella Braverman?