SRK brings together a roster of Bollywood stars for his unique and massive Temptations Reloaded Tour 2008. He will be touring Europe at some of the major cities, full of fans eagerly waiting to see him.

“The wait is over, I am coming to your city.”

Shahrukh Khan launched his Temptation Reloaded tour in June 2008. Featuring live on stage, SRK himself, joined by the likes of Arjun Rampal, Bipasha Basu, Deepika Padukone, Anushka Dandekar and Ganesh Hedge. It will also include appearances by the superstar Aamir Khan and some dates may include Priyanka Chopra and Malaika Arora. Katrina Kaif and Kareena Kapoor will be part of the show for the Gulf dates along with female rapper Hard Kaur.

Many strongly believe this is a response to the Bachchan’s Unforgettable Tour which has now successfully completed. Recently, there has been much press related to the ‘Shenshah’ Amitabh Bachchan and ‘Badshah’ Sharukh Khan raising the bar against each others ability to win audiences and fan support. Thus, the Temptation Reloaded tour is aiming to get a bigger slice of the pie compared to the Unforgettable Tour and recruiting top actors to perform in this SRK extravaganza. 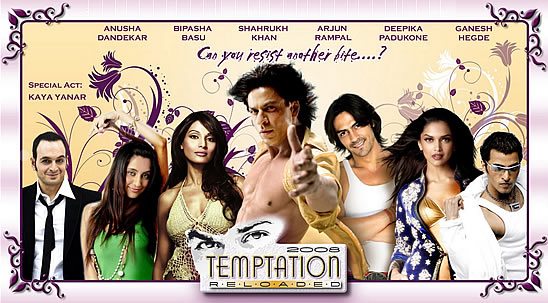 Spokesman for the SRK show, Mohammed Morani has stated that further to the huge success of the shows so far, they are planning “a huge entertainment event all over the world.”

When asked about which stars will be joining SRK, he said “Shah Rukh is our main star attraction. The rest have to be finalised.” Therefore, stars will join and leave the show more likely based on dates and their availability.

Shahrukh has promoted the new tour by saying “The wait is over, I am coming to your city.” Here are the current dates, venues and online tickets for the Shahrukh Khan Temptation Reloaded Tour.

More dates will be added as they become available.

The cancellations for the Germany and Spain shows have come as a shock to fans in Germany and neighbouring areas, who were all planning to go and see this huge show. A statement was released by the management company as follows.

Red Chillies International Limited,  announces with great regret that they will be unable to facilitate the three city tour of the show “Temptation Reloaded 2008” with the proposed starring of Bollywood star Shahrukh Khan and other superstars in Germany . This is due to the breach of contract by the promoter of the shows SensAsian Media Limited (SensAsian Media). SensAsian Media did not fulfil its obligations in due time which makes it impossible for the shows to happen in Germany. We regret the inconvenience that these unforseen circumstances have caused to our fans and the audience. The shows were planned to be presented in Berlin (Velodrom) on October 17th, in Munich (Zenith Die Kulturhalle) on October 18th and in Frankfurt (Festhalle) on October 19th 2008.

Shahrukh commented on the cancellation and said, “I have done shows everywhere around the world from South East Asia to the Americas, Africa, the UK and in Europe, but never ever did I have the sad luck or the bad luck of having to cancel a tour. This is the first time and I promise the people of Germany that before I do a big show of this nature again, I will ensure that I first come to Frankfurt, Munich and Berlin with the happiness that I always bring and the happiness that you have given to me.”

DESIblitz presents a gallery of photos and videos from the Temptation Reloaded Tour.

Here are clips from the Rotterdam 2008 show (courtesy of ansche).

Shahrukh Khan has proved to audiences that once on stage he can use the Temptation tour to give his fans music, song, dance and acting, all in one big showcase.

Check out the photo gallery.

Amit enjoys creative challenges and uses writing as a tool for revelation. He has major interest in news, current affairs, trends and cinema. He likes the quote: "Nothing in fine print is ever good news."
Preity and Akshay at TIFF 2008
The Bachchan Unforgettable Tour