Sepp Blatter has resigned from his post as FIFA president, after 17 years of chairing the international football governing body. DESIblitz reports.

The Swiss attorney general states Blatter is not under investigation by the local authorities.

Sepp Blatter, who has been chairing FIFA since 1998, announced his resignation as its president, almost a week after officials had been arrested on corruption charges.

The 79-year-old made the announcement on June 2, 2015 at FIFA’s headquarters in Zurich, where reporters were not allowed to ask questions.

Blatter said in the press conference: “I have thoroughly thought about my presidency and the 40 years FIFA has played in my life.

“I love FIFA more than anything else and I only want to do the best. I decided to stand again for election for the good of football.”

Blatter, who was only re-elected on May 29, 2015, then called for an ‘extraordinary congress’ to replace him as president.

He said: “I will not stand. I am now free from the constraints of an election. I will be in a position to focus on profound reforms.”

A reporter at the press conference tweeted a photo of Blatter as he appeared to exit the room:

Instead of the corruption scandal, Blatter seemed to attribute his resignation his choice to dedicate his efforts on implementing internal reforms for FIFA.

“For many years, we have called for reforms. But these are not sufficient. We need a limitation on mandates and terms of office. I have fought for these changes but my efforts have been counteracted.”

Towards the end of his announcement, Blatter stressed he had nothing but the best interest for FIFA and football.

He said: “FIFA’s interests are dear to me. That’s why I have taken this decision. What counts most for me is the institution of FIFA and football around the world.

“I would like to thank everyone who has always supported me in a constructive and loyal manner as president of FIFA.”

FA’s chairman, Greg Dyke, who was never very favourable of Blatter, responded in a statement, saying:

“We welcome today’s announcement and believe it is good news for world football and FIFA. Change at the very top of FIFA is the necessary first step in delivering real reform of the organisation.”

Dyke said: “I think it is great news for football. It’s long overdue. We can now get someone in to run FIFA and find out where all the money has gone from over the years. Something has come out of the events of last week that has caused Mr Blatter to resign. He’s gone. At long last we can sort out FIFA. We can go back to looking at those two World Cups.” 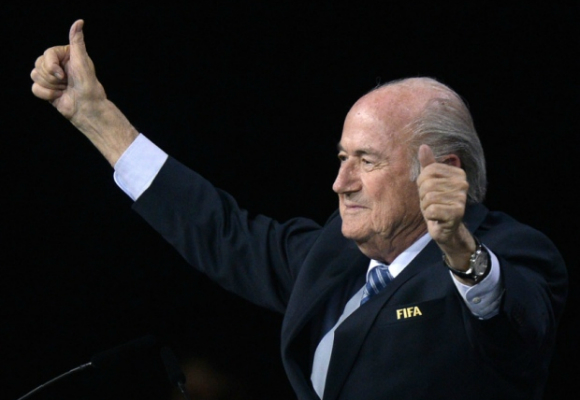 Many have been speculating whether Blatter would step down, after seven officials were arrested on corruption charges on May 27, 2015 by the Swiss authorities on behalf of the FBI.

But any doubts clouding over his reasons for resigning should be cleared, as the Guardian reported the Swiss attorney general states he is not under investigation by the local authorities.

Domenico Scala, the Head of Audit and Compliance Committee, also confirmed at the press conference the election for a new president will possibly take place between December 2015 and March 2016.

What will be of interest now is who will take over from Blatter to put the things right for FIFA and the game of football.