A senior Scotland Yard police officer has been served a “gross misconduct” investigation notice related to her nomination for a Queen’s Police Medal.

"any person can nominate any other person for an honour"

Temporary Chief Superintendent Parm Sandhu of Scotland Yard is reportedly being investigated for having broken rules regarding her royal honours nomination for a police medal.

According to the BBC, the senior Metropolitan Police officer has been served with a “gross misconduct” investigation notice, which means Sandhu could possibly face a serious disciplinary charge against her.

Whilst the investigation takes place, Ms Sandhu, who joined the police in 1989, has been put on restricted duties in her Metropolitan Police role.

The investigation is focusing on the line of inquiry related to allegations that Parm Sandhu encouraged her colleagues to support her nomination for a Queen’s Police Medal (QPM).

The Queen’s Police Medal is awarded twice a year by Queen Elizabeth II as part of her honours’ lists. Specifically, on lists for the Queen’s Birthday and the New Year.

The Queen’s Birthday honours list in June 2018 featured 18 officers who were awarded the QPM and the same number of officers were given medals in the New Year’s honours list for 2018.

The medals are awarded to police officers who demonstrate outstanding courage or distinguished service while serving in the UK police force.

It’s reported that another two officers from the Metropolitan Police are also being investigated for the misconduct.

The guidelines from the National Police Chief Council say that “any person can nominate any other person for an honour”.

But like any other honours nominations, people cannot nominate themselves or know about or participate in the process of being nominated, thus, providing any kind of bias.

The investigation by the Met is reviewing the allegation that Ms Sandhu influenced her QPM nomination by contacting other officers with a summary of information to support it.

No disciplinary action has been taken so far against Ms Sandhu since the inquiry is at an early stage. But having been served a notice, she could face dismissal if the allegation is proved during the investigation.

Parm Sandhu does have the support of representatives of the Police Superintendents’ Association while the inquiry continues. 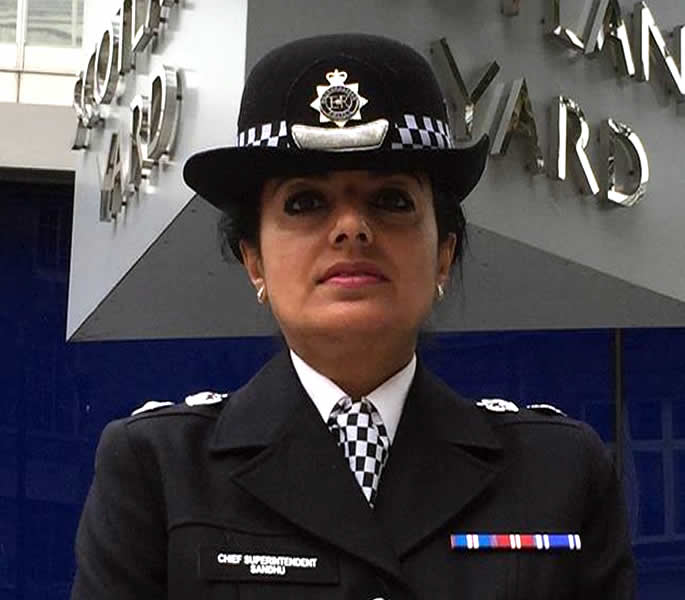 Regarding the matter, a statement issued by Scotland Yard said:

“The Met’s Directorate of Professional Standards (DPS) is investigating the conduct of three officers following an allegation that they breached guidelines relating to the UK honours nomination process.

“A temporary chief superintendent currently attached to human resources was served with a gross misconduct notice on Wednesday 27 June and has been placed on restricted duties.”

“Two other officers – a detective superintendent and an inspector, both from frontline policing – were served with misconduct notices on Wednesday 27 June. They remain on full duties. Enquiries continue.”

Parm Sandhu is one of the most senior BAME officers in the Metropolitan Police. She worked her way up through the ranks and is the highest-ranking woman Asian police officer.

“I will be promoted to Chief Supt in Met ! I will be the first woman of colour to hold this rank 1829 Met started we are making a difference because we support each other thank you all for being there for me x @Sharan_Project @MPS_SikhAssoc @bbcasiannetwork”

She was the recipient of an Asian Women of Achievement award in 2006, especially for her work within the community after the 7th July terror attacks. She is also working to tackle honour crime and in liaison with the Sharan project.