Pakistan Fashion Week returned to London for its fifth installment of talented designers and breathtaking fashion. DESIblitz were there for some exclusive Gupshup with all the top brands.

"Pakistan Fashion Week will be in Paris, Oslo, Washington DC, New York and Dubai in 2014."

London experienced the prestigious Pakistan Fashion Week (PFW) between November 2 and 3, 2013. In its fifth show since September 2011, PFW has in a short space of time met with universal acclaim establishing a trusted and high quality brand name.

People from all over the country attended PFW 5 at the very fitting Hilton London Paddington.

This fashion week has caused much hype among national and international press and DESIblitz were invited to join in on this media frenzy.

Traditions or ‘riwayat’ play a key role in the Pakistani culture. Which is why Riwayat was the name chosen by Adnan Ansari for the platform that is bringing Pakistan’s best to the European market. 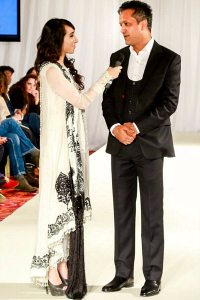 A key personality in Pakistan’s fashion and media industry over the past two decades, Adnan has brought to the west a series of events to raise the profile of Pakistani fashion, music and literature as never before. His Pakistan Fashion Week shows have created global fashion history.

Adnan stated: “I am overwhelmed with such a response from Pakistan Fashion Week. It started small, and now it’s becoming bigger than I ever expected.

Bridal couture is a private signature label of Saher and Adnan. The Pakistan based label was established in 2009. They specialise in creating Bridal Wear, modern pret, formal, semi-formal wear using contemporary cuts. 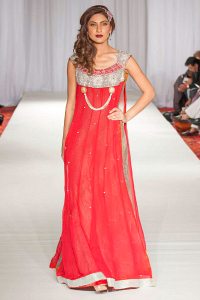 The signature style is found in their ostentatious use of diverse fabrics and unique interplay of colours. The collection is perfect for the wedding season.

Sam and Huma Naz are a team that works with professionally trained designers to thousands of clients and outlets. The cotton line offers pret to couture yet trendy cloths with affordability.

Moazzam Abbasi started his career fifteen years back from a small town of Hyderabad. Considered as an established name in the fashion industry, he has worked with all the top brands. This brand specialises in luxury pret and ready to wear attire.

Rana Noman’s collection was truly breathtaking. The intricate detail on this collection wowed the audience during PFW 5.

Rana stated: “Even though I live in Pakistan, coming to London is home away from home. The feedback upon my collections has always been overwhelming.”

This is not the first time Rana has exhibited at Pakistan Fashion Week. Each time, his collection supersedes his previous. During the black and white collection exhibited during PFW 5, audible gasps could be heard from the audience.

Sonya Battla’s grand finale was the cherry on the cake. From pret to formal to bridal wear, giving her own twist to both eastern and western fusion. 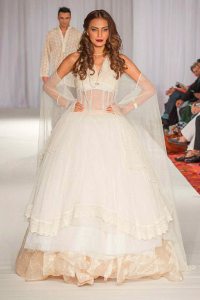 The models graced that catwalk with such elegance and beauty. Choreography by Reuben P Joseph and hair and make-up by Taniya Khan added to the chic and sophistication of this fashion show.

The audience were full of awe and amazement. It was interesting to see that there was a mix of all cultures that came to attend the show.

The host for the show was Attika Choudhary (Broadcast Journalist, and Producer for BBC and B4U Music). Speaking about the show, Attika said:

“It is always great to be part of an event that shows the beauty of Pakistan: the Pakistan that people here in the UK don’t see and hear about often enough! Also, the show makes it easy to get access to and even buy many gorgeous outfits.”

“To be honest, the experience of hosting PFW this year was beyond my expectations as the way it was organised and what a lovely audience I had from all backgrounds, means a lot to me. I feel honoured to be part of a fabulous event and look forward to hosting more shows in the future.”

As this show marks the UK fashion calendar, it also goes full steam ahead to make a big impact on the fashion calendar across the globe. DESIblitz will be following Adnan’s amazing success not just nationally here in UK but also internationally.