Manish Malhotra one of the most renowned fashion designers in India has been recruited by the Mumbai police to give their bland khaki uniforms a new and fresh look. Manish will be transforming the image of the police with his designer touch.

"A change is needed”

The streets and people of Mumbai can say so long to seeing khaki coloured police uniforms. Why you might ask? Simply because famous Indian designer, Manish Malhotra has declared that his new project is to redesign the uniforms of Mumbai police.

At this stage in time, not many details have been revealed regarding the designs of the new uniforms, but Malhotra has let the public know that all approvals have been made and taken care of. Although it will take time for things to materialise, we are sure that during the upcoming months, we will see Malhotra’s prestigious project in a much better glow.

Khaki has been the police’s identity for a long time and the idea is to give the police a new look. “A change is needed,” said a senior police officer.

Manish Malhotra gave a presentation in the office of the director-general of police in Colaba to provide an outline of the designs. Four to five designs are being considered by the police management, and the colours are blue and dark blue. There may be changes in the belt and cap too to update their look.

An industry insider close to the designer said:

“The Mumbai police is looking for a chic uniform and they feel Malhotra is the right man for them. He has had several sittings with the police and will meet them soon to know if they are going ahead with the designs.”

What lead the police of Mumbai to agree to the remaking of their uniforms? To begin with, Manish Malhotra is well respected Indian fashion designer, whose designs have stolen the hearts of many. At the age of twenty-five, Manish kicked off his fashion career by designing costumes for Juhi Chawla in a movie she starred in called Swarg.

Since then, the public has been interested in his collections because of his ‘fresh’ designs. Manish Malhotra is able to forecast a vision of what people like, hence, creating a collection that has features from previous trends in addition to his own ideas. His uniqueness and ability to transform a look into a character has brought a grave amount of popularity and fame to the design. 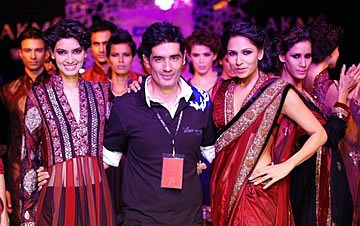 For instance, during the Winter Festive 2010 Lakme fashion show, Manish Malhotra stunned everyone when he revealed his new winter collection. Manish incorporated core colours into the collection. Manish said: “This fashion week is a nice platform for us to get our point across. Use of colours blue and deep red… the whole collection was streamlined.” These beautiful colours were splashed on sensual crepes, nets, silks and satins. Overall, collection showcased amazing saris, kurtas with stoles, long suave tops, fitted shirts, cholis and harem pants.

Bollywood stars Rani Mukherji and Preity Zinta are big fans of the designer and Rani said, “Manish is the best designer in Bollywood today. He always surprises us.” Preity pointed out that Rani started her career with Manish present. Rani replied, “Yes, Manish was standing right there during my first shoot.” Other stars present at the Winter show were Priyanka Chopra, Sameera Reddy and Amisha Patel all sitting on the front row.

Throughout the course of his fashion career, Manish was recognised for receiving many awards. IIFA had given Manish Malhotra an award for being the best dress designer. Award shows such as Filmfare, Lux Zee Cine, and Siemens viewers choice awards gave Malhotra awards for making spectacular costumes for films such as; Rangeela, Kuch Kuch Hota Hai and Dil to Pagal Hai. 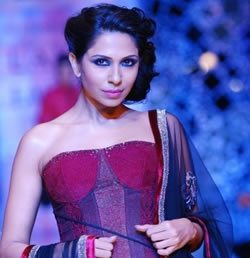 Not to mention, that during the beginning of Malhotra’s career, after showing off his brand new collections the people of India had fallen in love with all of Malhotra’s designs. Hence, creating two tends that the public just couldn’t get enough of. After featuring embroidered jeans in one of his collections, the public went absolutely nuts! Everywhere in India, people were purchasing jeans with an embroidered effect. The second trend which became a huge hit without a doubt was Manish’s saris. After being featured in numerous fashion shows, all anyone wanted was a sari designed by Manish Malhotra.

Manish has a huge passion for clothes and it shows in every aspect of hid designs. He says: “For me, clothes are my life and I wake up to it for the love of it.” So, there is no question, that Manish Malhotra is the ideal choice to design the Mumbai Police uniform because they sure be getting the Malhtora treatment in every stitch.

Neha Lobana is a young aspiring journalist in Canada. Besides reading and writing she enjoys spending time with her family and friends. Her motto is "Live as if your were to die tomorrow. Learn as if you were to live forever."
Winter Lakmé Fashion Week 2010
Fashion Trends for 2011