Mia Khalifa sent her fans into a frenzy as she shared a series of pictures on Instagram, wearing some extravagant shoes.

"Shoes off in my house, unless they’re this cute."

In her recent posts, Mia Khalifa has been showing off her footwear game, sporting some very extravagant shoes.

Since leaving the adult film industry, Mia has become an influencer and frequently shares sultry glimpses of her outfits.

This time, the attention was on her shoes.

In a series of pictures, Mia styled herself as she wore a skimpy playsuit that showed off her curves.

She accessorised with a few anklets while Versace platform mules were on her feet. 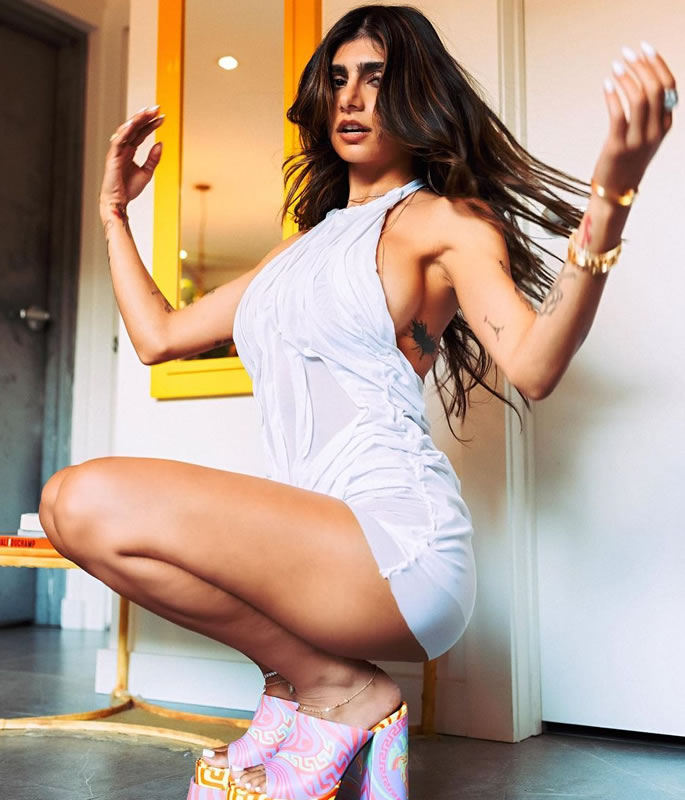 The leather heels had a printed design, with pink, blue, lilac, orange and yellow hues, giving off retro vibes.

As Mia casually posed, the heels complimented her outfit as the vibrancy contrasted with the more neutral colour of her outfit. 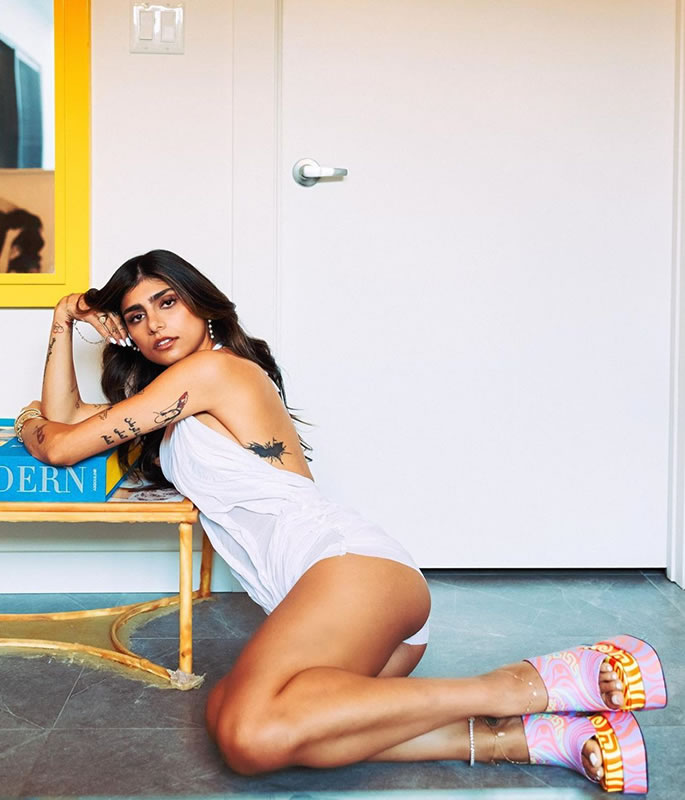 She was clearly a fan of her brightly-coloured mules as she wore them with another outfit.

This time, she opted for black trousers and a baby pink cardigan.

Mia cheekily allowed the cardigan to drop down her shoulders while the trousers accentuated her long legs.

She gazed into the camera whilst holding a bunch of flowers before crouching down and smiling. 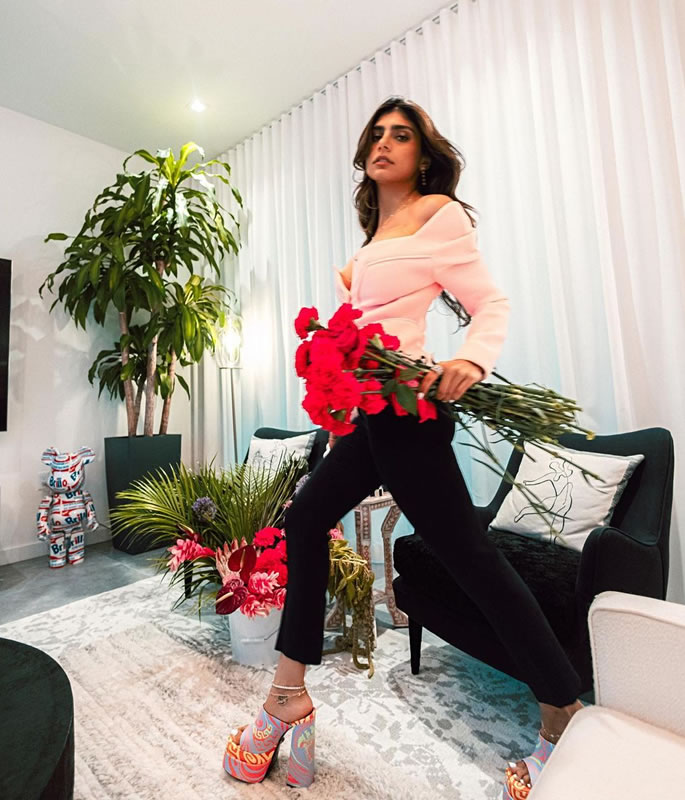 Mia continued to show off her elaborate array of shoes as she changed into a pair of unique boots from designer Ancuta Sarca.

The black and pink mesh boots are a hybrid design that combines trainer fabrics and vintage heel silhouettes.

They have a mesh sock and tongue, typically seen in trainers. Meanwhile, the pointed-toe design are consistent with heels.

Mia wore the shoes with a frilly pink dress.

The dress, from FANCi, had a semi-sheer appearance and a plunging neckline. 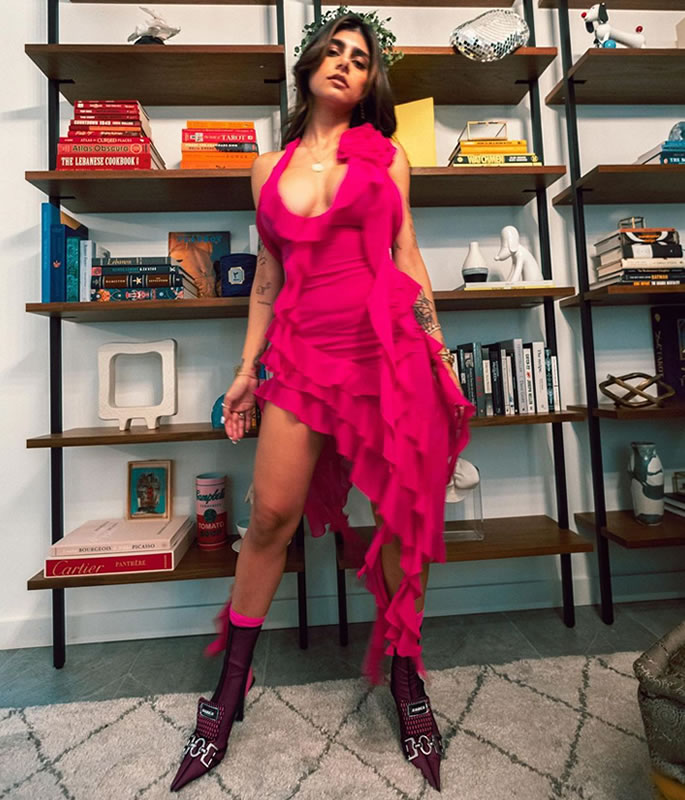 “Shoes off in my house, unless they’re this cute.”

Mia Khalifa chose an abstract pair of shoes to match an art-inspired post.

In the photos, the OnlyFans star donned a loose-hanging all-white co-ord, which bared her assets as she lounged on a bed. 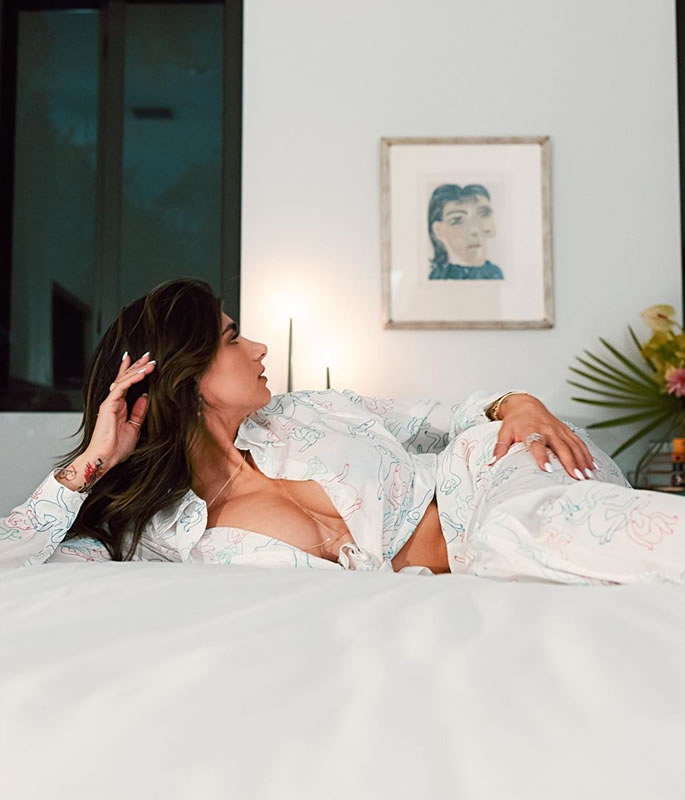 They contrasted with her bold green heels.

From the brand WINDOWSEN, they are described as athletic heels as they are inspired by sports footwear.

Also featuring heavily in the pictures is a famous copy of Pablo Picasso’s artwork, Tête de femme No. 2, Portrait of Dora Maar, painted in 1942.

The Picasso features and references were the inspiration for one Twitter user’s comment, which earned a reply from Mia Khalifa.

“You would have been the perfect inspiration for Picasso.”

Not afraid to shy away, Mia responded:

“This is the most pretentious way to tell someone they look like a side chick.” 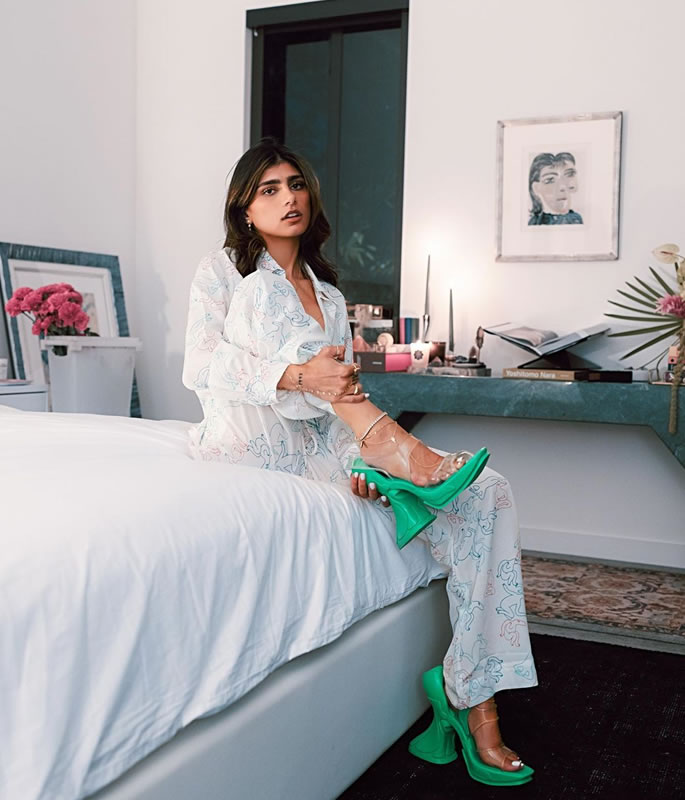 Her comment was in reference to the women Picasso painted as it is thought that many of them were the artist’s lovers.

Picasso earned a reputation as a serial womaniser and his relationships with them have since become the sources of art exhibitions in their own right.

Dhiren is a journalism graduate with a passion for gaming, watching films and sports. He also enjoys cooking from time to time. His motto is to “Live life one day at a time.”
10 Best Black Friday Clothing Deals 2022
Kriti Sanon grabs Eyes with Risqué Metallic Blue Gown