Malkit Singh MBE is one of the most well known Bhangra singers around the world. DESIblitz caught up with the sparkling golden star to find out more about his life and music.

Malkit has released over 20 Bhangra albums

Malkit Singh is a Bhangra legend who has been in the UK Bhangra music industry for over two decades – Malkit Singh. From arriving in the 1980’s in the UK as a Punjabi singer to being the first ever Bhangra artist to receive a prestigious MBE (Members of the Order of the British Empire) for his services to Bhangra music, Malkit Singh has come a long way.

Malkit Singh was born in 1972 and was raised in the village of Husseinpur from Jalandhar district in the Punjab, India. He was educated at his village school initially and then graduated at Khalsa College in Jalandhar. His singing started as a hobby during his education years, starting at school and then at college. He entered and sang in folk song competitions during that time and received a star shaped gold medal at Guru Nanak University for his singing.

Malkit Singh arrived in Birmingham in the UK, in 1984 and was supported by Tarlochan Singh Bilga, who is a relative and was from the early 1970’s UK Punjabi band Bhujanghy Group. Subsequently, Malkit’s singing career started two years later in 1986 with the release of his first album and newly formed band called ‘Golden Star,’ which was aptly named after the medal that he won in India.

The first album called ‘Nach Gidde Vich’  was primarily an acoustic Punjabi folk album with the raw and live sounds of harmonium, tumbi and dhol. The songs from the album spiraled Malkit Singh into a new singing sensation of the UK Bhangra music scene.

The traditional boliyan style song ‘Gur Nalo Ishq Mitha’ from this album was a massive hit all over the UK. 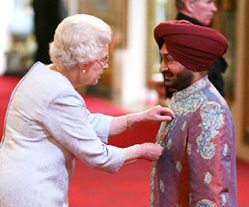 Malkit Singh’s live performances are as good as his recordings, which demonstrate the versatility of this singer and his ability to woo and entertain audiences world-wide. He has toured over 20 countries around the world and finds that he learns from every concert and admits he still has those nerves before every performance, hoping the crowd will appreciate his performance.

DESIblitz is proud to present an exclusive interview with the legend and king of Bhangra music, Malkit Singh. The three parts below demonstrate the depth of questions and answers during the interview in order to give you a very unique insight into Malkit Singh MBE. Find out about his likes and dislikes, his views on Internet downloading, views on music videos, the accusation of human trafficking, his favourite food, his favourite artists, his most loved song and lots more!

In addition to the MBE bestowed upon him by the Queen of England, Malkit Singh has won many awards during his successful singing career and these include being listed in the 2000 Guinness Book of World Records as the biggest selling bhangra artist of all time, an award from Birmingham City Council, the Rajiv Gandhi Foundation award and the NRI Institute Excellence Award.

Check out the gallery of pictures below of Malkit Singh MBE.

Jas likes to keep in touch with the world of music and entertainment by writing about it. He does like hitting the gym too. His motto is 'The difference between the impossible and the possible lies in a person's determination.'
Miss Pooja UK Tour Videos
H Dhami Wallpapers